Over 90% of UPS Teamsters Just Voted to Strike 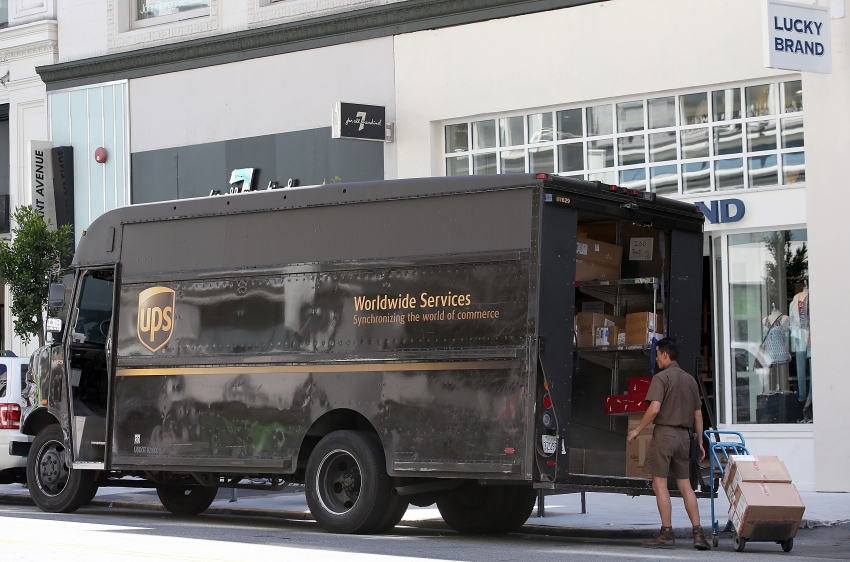 A strike at UPS could see up to 280,000 UPS-Teamster members walk out. (Justin Sullivan/Getty Images)

Twenty-one years after the historic 1997 United Parcel Workers strike, are UPS-Teamsters ready to once again walk off the job? After Tuesday night’s strike authorization vote, workers are one step closer to that possibility.

On Tuesday, thousands of Teamsters across the country listened-in on a national conference call as the union’s chief negotiator, Denis Taylor, reported that UPS and UPS Freight members voted by over 90% to authorize a strike if UPS does not agree to an acceptable contract by July 31 when the current contract expires.

UPS is the largest private-sector unionized employer in the United States and a strike at the company could see up to 280,000 UPS-Teamster members walk out, with potentially major disruptive impacts on the U.S. economy. And it would be the largest strike the country has seen in decades.

The Teamsters are negotiating two national contracts with UPS. One contract covers the parcel division that is most familiar to Americans with their chocolate brown trucks on commercial and residential streets. The second is the lesser-known UPS Freight, previously Overnite Transportation and Motor Cargo, that UPS bought in 2005 and subsequently rebranded.

The issues at the negotiating table include the poverty level pay for part-time workers, healthcare and pensions, subcontracting union especially feeder work [or over-the-road work between hubs] to non-union contractors, and UPS’s demands for drivers to work a 70-hour week.

UPS has a contract proposal on the table that gives the company the right to force package drivers to work up to 70 hours a week anytime they deem it necessary “to avoid service disruptions.”

Under the current contract, UPS drivers can refuse work after completing their 60th hour of work in any work week.

Throughout negotiations, UPS has remained focused on winning concessions from the Teamsters and General President James P. Hoffa, the son of the notorious Jimmy Hoffa. Unfortunately, chaos and confusion have characterized the union side of the negotiating table.

Last September, Hoffa fired then-chief negotiator Sean O’Brien, president of Teamsters Local 25 and a longtime Hoffa ally, after he reached out to Fred Zuckerman, a Teamster leader who ran on the reform slate Teamsters United (TU) in the 2016 election and came within a few thousands votes of defeating Hoffa.

Hoffa replaced O’Brien with Denis Taylor, a Baltimore Teamster leader and an unrecognizable figure for most UPS-Teamsters.

Further adding confusion to this situation was a proposal from the Teamster bargaining team to create a new, inferior category of ‘hybrid-drivers’ who would be paid less—through a two-tier wage scale—and work weekends without overtime pay. If accepted, this proposal would begin the process of breaking up the highly paid but physically demanding 60,000 full-time package car delivery jobs.

TU called the proposal the “worst giveback in UPS history.” Opposition on the negotiating committee led Taylor to remove three of its members—Avral Thompson, John Bolton and Matt Taibi. Thompson and Taibi had both been vocally opposed to the “hydrid-driver” proposal.

Chaos in the leadership

The results of the strike vote soon went viral on social media. UPS was quick to respond on Twitter claiming “The voting results were expected as this is common in negotiations. The current contract remains in force, so it’s business as usual while negotiations continue.”

Yet, negotiations are anything but usual this time around. This year, the Teamsters, led by Hoffa, reluctantly called a strike authorization vote.

During previous contract negotiations in 2013, Hoffa and the then-chief union negotiator Ken Hall didn’t call such a vote—sending a strong signal to UPS that union leadership would push for membership ratification—even though the proposed contract was filled with concessions.

It was a bombshell election that shook up the Teamsters establishment and left the old guard scrambling. It is widely believed, though not certain, that Hoffa will not run for reelection in 2021.

What is the possibility of a national strike against UPS? The Teamster officialdom is fractured right now, and competition for the highly prized top two positions in the Teamsters—General President and General Secretary-Treasurer—could potentially create an atmosphere for bolder action from the rank-and-file.

Sean O'Brien and Fred Zuckerman have announced a joint ticket for the 2021 election. It is expected that Ken Hall, the former parcel director, will run, along with Rome Aloise, who has previously been charged with corruption. All candidates for the 2021 election will have to take a stand on the contract currently under negotiation if they expect to be taken seriously.

Zuckerman tells me of the strike authorization:

The strike authorization gives Hoffa's negotiators the leverage they asked for; they better grow a backbone or we headed for a contract rejection. That's not about politics. That is about 260,000 Teamsters who are not going to allow their employer to walk all over them for another five years.

The future of the Teamsters is on the line right now. Stumbling towards a national strike is not the best strategy to beat a rich, powerful and ruthless global corporation like UPS.

UPS, however, is highly vulnerable to strike action. Its spokes and hubs distribution system make it vulnerable if even a few Teamsters local unions strike. In the event of a national strike, all eyes will be on Louisville, Ky., the location of “Worldport,’ the center of UPS global air operations that fly to over 200 countries each day.

The 1997 UPS strike led by Ron Carey, the Teamsters reform leader, nearly changed the direction of the entire U.S. labor movement. As spring turns to summer, Teamsters are on the verge of taking the baton from teachers in states such as West Virginia, Oklahoma and Arizona and engaging in militant labor action.

It’s up to the rank-and-file now.

Joe Allen is the author of The Package King: A Rank and File History of United Parcel Service, Vietnam: The Last War the U.S. Lost and People Wasn't Made to Burn: A True Story of Race, Murder, and Justice in Chicago (Haymarket, 2011). He has written for Jacobin, Socialist Worker and elsewhere.