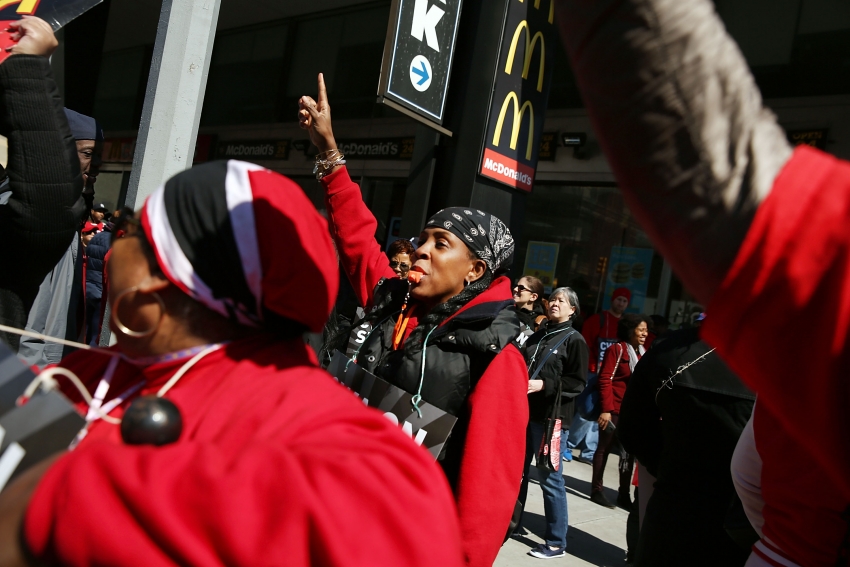 Today, John Roberts’ Supreme Court handed down its much-anticipated ruling in Janus v. AFSCME, a decision that is poised to defang public sector unions and curtail the power of an already beleaguered U.S. labor movement. Because public-sector unions disproportionately empower and protect African-American women, this class of hyper-exploited workers is poised to be hit hardest by the anti-union ruling.

At stake in the case was whether unions would be able to continue collecting dues from non-members who work under collective bargaining agreements. This precedent, established under the 1977 Abood v. Detroit Board of Education case, has been instrumental in helping unions fund their operations and represent workers, even under an increasingly hostile political climate for labor.

Unions are bracing for the aftermath of the ruling. And mainstream media outlets, which do not generally devote much ink to labor stories, have highlighted the case in headline after headline. Yet what many fail to mention is that Janus would be particularly devastating for one group in particular: African-American women.

Public sector unions have long been a source of economic power for African-American women, who are disproportionately represented in their ranks. A March brief from Celine McNicholas and Janelle Jones at the Economic Policy Institute (EPI) shows that African-American women have the highest share of workers in the public sector—17.7 percent, equaling about 1.5 million workers.

The public sector provides job opportunities for African-American workers, and women especially, at a rate much higher than the private sector. In 2015, African-American women made up 10 percent of government workers, compared to just 6 percent in private-sector employment.

As public-sector union members, African-American women benefit from higher wages, more security and stability on the job, and more equality in the workplace. They face smaller wage disparities across racial lines than their counterparts in the private sector and benefit from stronger affirmative action laws. Research by Janelle Jones at the EPI has shown that, on average, “black women make $17.92 in the public sector, and $13.08 in the private sector.”

“This [decision] marks a direct attack on Black women getting a fair shot in our economy,” says Alicia Garza, director of special projects at the National Domestic Workers Alliance (NDWA) and co-founder of Black Lives Matter. “We make up nearly one-fifth of public-sector workers, and already face an uphill battle in making strides in every single workplace. At a time when our power is being actively undermined, we must do everything we can to grow our power.”

Unionized public-sector jobs have also provided a pathway to the middle class for African-American women, especially those who live in major metropolitan areas with large government workforces, such as Atlanta and Washington, D.C.

Attacks on public-sector unions such as the Janus case—which was backed by a cartel of right-wing think tanks, billionaire investors and corporate interests—are really attacks on the rank-and-file workers who make up union membership. Wages are typically 3.1 percent less in right-to-work states—meaning workers end up earning $1,558 less a year. And the workers who will be most impacted are the African-American women.

On average, African-American women have to work seven months longer to receive the same pay as white men, and they continue to be over-represented in low-wage jobs. They also work more hours than white women, and are paid less than white men at every level of education.

As a result, African-American women are some of the most precarious workers in the country. Union representation has provided a ladder to economic security for scores of these workers, but if public-sector unions see their power and membership decline as a result of Janus, as is expected, it will be African-American women who will face the brunt of the negative consequences.

“This decision is a blow to every working person that has ever felt unheard, unseen or hurt at the hands of unchecked power,” says Ai-jen Poo, executive director of the NDWA. “By cutting workers’ collective organizing power, especially that of women, we’re increasing vulnerability to wage theft, sexual harassment and discrimination. We should be expanding people’s rights at the workplace, not perpetuating vulnerability.”

The corporate interests bankrolling Janus would welcome the sight of public-sector union membership plummeting—this has been their goal all along. By starving unions of funding and resources, they will be more capable of hastening a race to the bottom on wages, benefits and working conditions.

Anti-union groups that pushed for the Janus decision, such as the Liberty Justice Center and National Right to Work Foundation, have argued that it will “restore workers’ rights” and protect the First Amendment. But the reality is that workers across the country, and African-American women particularly, will be profoundly harmed.

Throughout U.S. history, African-American women have endured some of the most reprehensible treatment this country has to offer. Today’s Janus decision almost surely means they will face more indignities and ills as a result. Upending this new status quo and bringing justice to the most vulnerable workers in our society is the challenge now confronting the labor movement. To meet it, unions will need to organize—and fight—like never before.