We’ve Been Fighting for $15 For 7 Years. Today I’m Celebrating a Historic Victory. 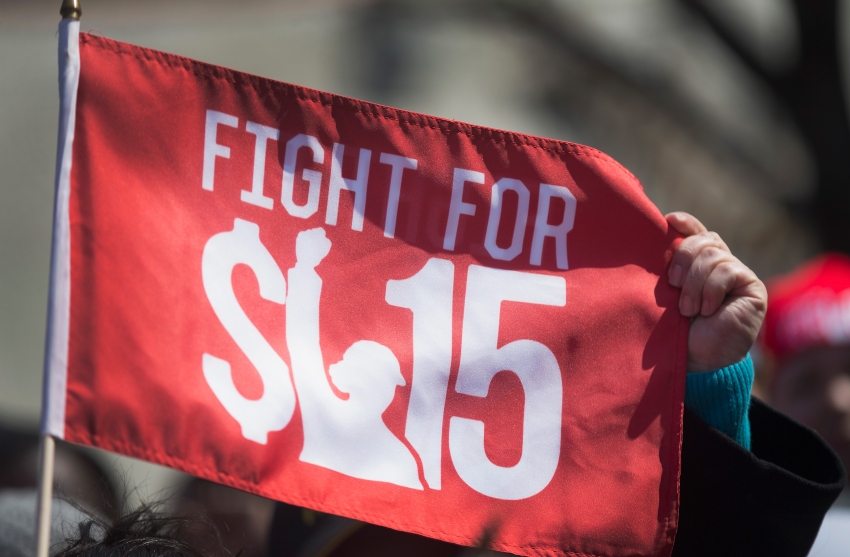 Illinois' passage of a statewide $15 minimum wage was 7 years in the making. (Photo by Scott Olson/Getty Images)

On Tuesday, Illinois became the first state in the Midwest to enact legislation phasing in a $15-per-hour minimum wage, giving 1.4 million workers a raise every year between 2020 and 2025.

Upon hearing the news last week that both houses of the Illinois General Assembly had passed the $15 minimum wage bill and would be sending it to Gov. J.B. Pritzker’s desk, I immediately thought back to just over seven years ago, when I was present at the creation of the Fight for $15 campaign.

It was late 2011. Centrist Democrats in Washington—more worried about closing the national deficit than addressing rising poverty—searched for a so-called “grand bargain” to slash the social safety net in exchange for raising taxes. But starting that September, a multitude of fed-up activists united under the banner of Occupy Wall Street to call out extreme economic inequality through direct action.

After spending several weeks camped out in New York’s Zuccotti Park as a participant in Occupy Wall Street, I returned home to Chicago and followed Newt Gingrich’s sage advice to “take a bath and get a job,” getting hired in December as an organizer with the community organization Action Now. A handful of other newly hired organizers and I were assigned to a campaign with the seemingly ambitious goal of raising Illinois’ minimum wage from $8.25 to $10 an hour.

From the start, the philosophy of the campaign, known only internally as “LWWO”
(“low-wage worker organizing”) was that lawmakers in Springfield would not prioritize raising the minimum wage unless workers collectively demanded it through mass action. A group of other newly hired organizers and I would roam the stores and restaurants of Chicago’s Loop and Magnificent Mile at all hours of the day, trying to get as many workers as possible to sign petition cards calling for a $10 minimum wage. A common response early on was that $10 would be nice, but was unrealistic.

As the campaign proceeded in early 2012, my fellow organizers and I realized we were part of something bigger than we had first assumed. The campaign, we learned, was being funded by the Service Employees International Union (SEIU). In the wake of Occupy—which had greatly contributed to the reinvigoration of class politics with the popular 99% vs. 1% slogan—SEIU’s top officials were exploring the possibility of a nationwide effort to unionize the food-service and retail sectors, site of the largest post-recession job growth.

The only problem was that union leaders, often averse to taking risks, have traditionally viewed low-wage, service sector workers as “unorganizable” due to the precarious nature of their employment and the intense anti-union animus of companies like McDonald’s. Our job was to gather enough contacts among downtown Chicago’s low-wage workforce to prove to SEIU officials that these workers could indeed be organized and that they should greenlight the proposed unionization effort.

Of course, managers at downtown stores and restaurants did not like us entering their place of business and talking with their employees about how wages were stagnating while the cost of living kept rising. My fellow organizers and I did not ask for permission, but would talk with workers any way we could—behind the manager’s back, on shift changes or smoke breaks, or walking into the kitchens of restaurants uninvited. We got kicked out of virtually everywhere, but we kept coming back. Most effective of all, we recruited some of the workers themselves to begin circulating our petition among their coworkers.

By the spring of 2012, we had gathered over 20,000 contacts. This, along with the simultaneous success of a similar effort in New York City, was enough to convince SEIU leadership to move forward with the organizing drive in both cities. Over the summer and into the fall, after months of one-on-one conversations and small group meetings, hundreds of fast-food and retail workers came together to found the Workers Organizing Committee of Chicago, while a similar organization was formed in New York.

In late November and early December 2012—deliberately coinciding with the holiday shopping season—workers in both New York and Chicago held 1-day strikes to demand a $15-per-hour minimum wage and the right to form a union. The Fight for $15 was officially on.

I had left the campaign in late summer to go to graduate school, and was surprised to see that the wage demand had jumped from $10 to $15. But it made sense from a strategic standpoint. Ten, even twelve dollars would seem a lot more reasonable if workers were demanding fifteen. More importantly, it made sense from a moral standpoint. Workers needed and deserved at least a $15-an-hour wage.

In talking with so many retail and fast-food workers, I had come to know in vivid detail how exploited they truly were—not only in terms of being paid poverty wages by multibillion-dollar corporations and having to work multiple jobs or receive public assistance just to scrape by, but also in terms of being subjected to daily harassment, abuse and disrespect by managers and customers.

The Fight for $15 has never been solely about boosting workers’ wages, but also boosting their dignity. The demand for “15 and a union” in the early 21st century has become as iconic to the labor movement as the demand for the 8-hour workday was in the late 19th century. In the years since the campaign went public, there have been countless short-term strikes by low-wage workers across the country, and the globe.

While the Fight for $15 has faced justified criticisms for being too top-down and too focused on media attention, it has also scored numerous victories. Dozens of cities and states have raised their minimum wages, hundreds of thousands of Amazon employees now have a $15-per-hour minimum wage, and millions of workers in five states and the District of Columbia are now on the path to a $15-per-hour minimum wage. As progressives in Congress push for a federal $15 minimum wage, workers in low-wage sectors will have to keep organizing to win unions so they can bargain for increased pay raises, benefits and other workplace rights—the next horizon of the movement.

To me, the passage of Illinois’ $15 minimum wage bill this week is proof that no matter how “impossible” they may seem, bold initiatives aimed at dramatically improving the lives of working people are, in fact, achievable.