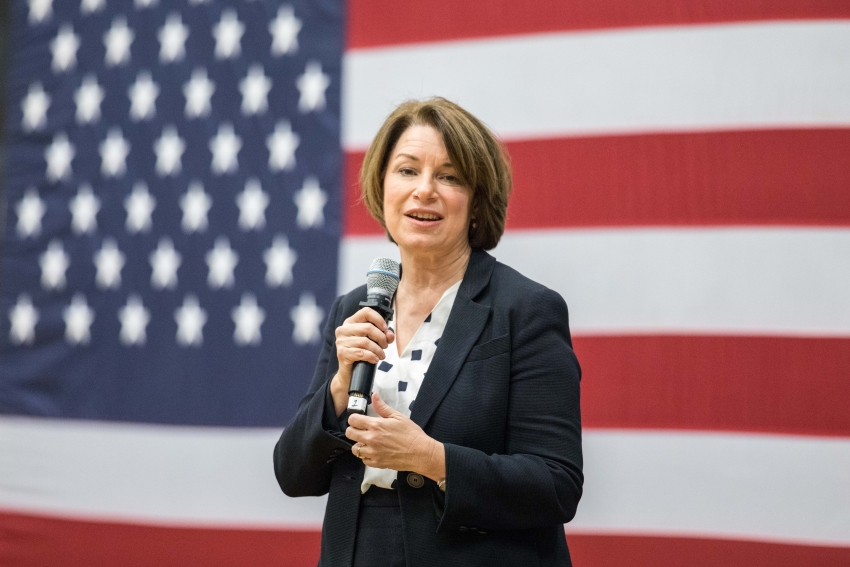 Based on a third-place finish in New Hampshire, pundits have declared Sen. Amy Klobuchar’s presidential campaign to be “surging”—despite the fact that national polls show her roughly 16 points behind Sen. Bernie Sanders. CNN analysts are working around the clock on the question of whether her campaign has “momentum.”

Both pundits and voters have largely overlooked Klobuchar’s reputation as a terrible boss since the Minnesota senator launched her campaign last February. According to current and former employees, Klobuchar regularly yells at staffers over minor infractions and throws objects—allegedly hitting one aide with a hurled binder. She reportedly sabotages staffers who try to leave her office by calling their new employers and attempting to have their job offers rescinded. Her reputation is so well-known in Washington that she had trouble staffing her own presidential campaign, HuffPost reported. “The way she treats staff is disqualifying,” one former staffer told Yahoo! News last year.

In the year since, Klobuchar’s history in the workplace has gotten little media traction. You’re far more likely to hear about “Bernie Bros” tweeting the snake emoji—despite the fact that one involves a presidential candidate and the other involves people who are not running for president. In an interview, the New York Times Editorial Board asked Klobuchar about the high turnover rate in her Senate office, but ultimately didn’t find the issue disqualifying, and handed Klobuchar its endorsement along with Senator Elizabeth Warren.

Klobuchar’s office had the highest turnover rate in the Senate between 2001 and 2018, according to a report from the website LegiStorm. Klobuchar’s best answer when asked about her reputation as a terrible boss has been that she has high expectations for her staff, and to repeatedly point out the few staffers who have managed to stick around. But a greater number of staffers (always anonymous) have talked about how Klobuchar’s treatment created a work atmosphere irradiated with anxiety and paranoia.

Aides in Klobuchar’s office quickly learned to walk on eggshells. During her first Senate run in 2006, aides assembled an eight-page memo for how to handle their boss’s erratic behavior. “Especially while in the car during a busy day: if she is EXTREMELY upset about something, let her rant through it, DON’T interrupt her unless ABSOLUTELY necessary and be careful when trying to calm her down,” the memo read.

Klobuchar’s record as a boss goes beyond the typical tough boss archetype. Taken together, the stories of current and former aides paint a disturbing picture of a boss eager to demoralize and humiliate her own staff. One former aide to ex-Sen. Al Franken told HuffPost about a telling encounter with a young Klobuchar aide. Klobuchar was running late to an event with Senator Al Franken, and the young staffer was sent to explain why her boss was late. “I’m supposed to tell you,” she said, “Senator Klobuchar is late today because I am bad at my job.”

The toxic culture in Klobuchar’s office appears to go beyond personal interactions. The employee handbook once included a policy requiring staffers who took parental leave to remain in the office for three times as many weeks as they had been gone once they returned to work, according to the New York Times. Bizarrely, the policy also directed staffers who left during that period to pay back the money earned while they were on leave. After the newspaper raised questions about the policy, Klobuchar’s office promised to revise it.

Klobuchar’s reputation became such a problem within the Democratic caucus that in 2015, then-Senate Minority Leader Harry Reid personally admonished Klobuchar and told her to change her behavior, according to a HuffPost investigation.

“I've always been taught that your true character shows in how you treat those with less power than you, especially behind closed doors,” one anonymous former Klobuchar staffer told BuzzFeed News last year. “The way Sen. Klobuchar behaves in private with her staff is very different than when she’s in the public eye, and that kind of cruelty shouldn't be acceptable for anyone.”

Some have argued that criticism of Klobuchar as a boss is a sexist double standard, noting President Bill Clinton’s reputation for “purple rages” and Bernie Sanders’ speaking volume. But a bad boss is a bad boss, full stop. The way to combat sexism is not to relax our standards for women; it’s to hold male lawmakers to an equally high standard befitting their office. (As for Bernie, there’s a difference between a senator who doesn’t use his “indoor voice” while speaking at rallies, and one who verbally and physically abuses their staff.)

The descriptions of Klobuchar can’t be written off as simple backlash against a woman in a position of authority. A record number of women have run high-profile presidential campaigns in the past five years: Hillary Clinton, Kamala Harris, Marianne Williamson, Jill Stein, Elizabeth Warren, Kirsten Gillibrand, Tulsi Gabbard. None have faced allegations like this.

During Klobuchar’s 2006 senatorial campaign, the president of the local AFSCME chapter argued in a letter that the union should withhold its endorsement over Klobuchar’s “shameful treatment of her employees.” James Appleby, the union leader, argued that Klobuchar’s behavior made her “wholly undeserving of AFSCME’s endorsement,” writing that as Hennepin County Attorney, Klobuchar had “created a hostile work environment” and “severely damaged the morale of the office.” “In short,” Appleby wrote at the time, “Amy Klobuchar is exactly the kind of candidate that AFSCME should oppose.”

So why haven’t more labor unions and workers spoken out in solidarity with Klobuchar’s staff during her 2020 campaign? Perhaps it’s difficult to muster much sympathy for people who decide to pursue a career in politics. But when a boss is abusive, it’s not usually the chiefs of staff making six-figure salaries who suffer the worst abuses, but the most junior employees with the least power.

The life of a typical Hill staffer is already one of thankless labor resulting in being underpaid and overworked. Among 16 staff positions in Senate offices, the median income actually decreased over the past two decades, according to a 2019 report from the Congressional Research Service. The median pay for legislative assistants in Senate offices fell 0.8% from 2001 to 2018. Over the same time period, median pay dropped 20 percent for executive assistants, 26% for press secretaries, and 11% for chiefs of staff. Meanwhile, the cost of rent in the Washington, D.C. metro area nearly doubled between 2005 and 2019, according to a report from the website Zillow. Combine a grueling work environment and depleted wages with a skyrocketing cost of living, and you’re left with a chronically stressed-out, miserable workforce.

The culture on the Hill already encourages staff to maintain an intense level of loyalty, bordering on sycophancy, toward members of Congress. On top of this, Congressional staff are not allowed to unionize, so aides have little to no recourse for being mistreated in the workplace. Their options are to go to another office, leave the Hill entirely, or suck it up and stay.

Why shouldn’t we hold a president—or a senator, for that matter—to the same workplace standards we would any other manager? Why is it OK to mistreat your employees, so long as it’s in the name of furthering your own power? And what does it say about a country for whom such stories barely register in our collective conscience?

An Amy Klobuchar presidency would undoubtedly be better than a second Trump term. But it would also communicate a very specific message about her party’s stated values: Namely, that it doesn’t matter if a Democrat upholds those values in her own life.

Emma Roller is a writer and teacher in Chicago. @emmaroller