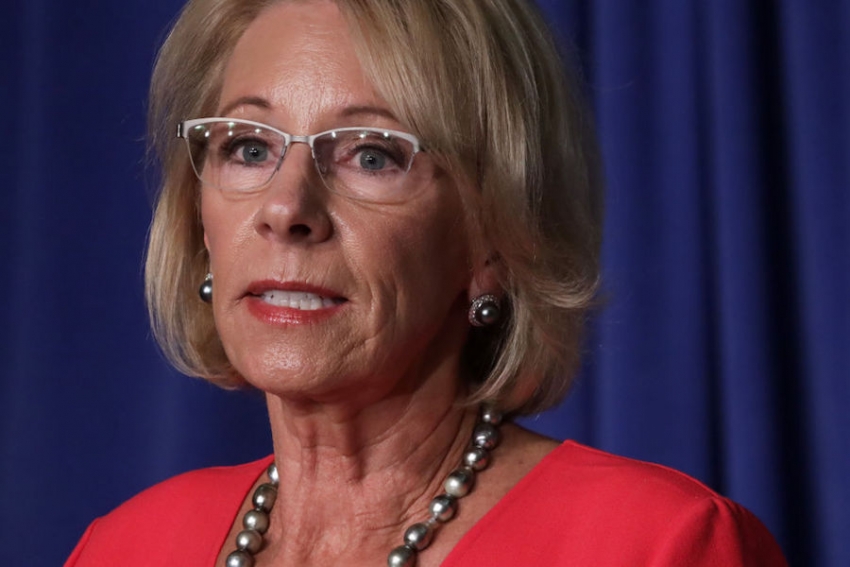 Secretary of Education Betsy DeVos, who advocates moving government funds from public schools to private charters, has said nothing about moving money from police departments to alternative responders. (Photo by Alex Wong/Getty Images)

Police are violently suppressing street protests across the country in mutiny against community demands for democratic accountability and respect for human rights. Their brutal rejection of basic demands for greater oversight and penalties has fueled larger demands for defunding police departments, if not outright abolition and replacement with other bodies. In this context, some activists are calling for a crackdown on police unions, which they say protect police from democratic accountability.

That these calls are not being joined by a seemingly obvious ally is telling.

There is already a political movement that blames unions for the harm done to Black communities by publicly funded institutions. Its adherents argue that these public bodies misspend the money they have and deserve no additional resources. It is well-funded by the philanthropy world, hyped by celebrities, cloaked in the rhetoric of civil rights and showered with uncritical media coverage, and has been successful in bending city, state and federal budgets to its will. It calls itself “the “education reform movement.” For years it has ruthlessly pursued an agenda of removing practitioners and their allies from the decision-making process, imposing strict and arbitrary accountability on teachers and students and experimenting with market-based solutions like charters. Its “no excuses” approach to testing and discipline has, among other travesties, exacerbated Chicago’s school-to-prisons pipeline and decimated New Orleans’ Black middle class.

Its silence on the subject of police reform at this moment when millions of people are calling the question on whether Black lives really matter is deafening.

Where is charter-school-evangelist Stand for Children’s proposal for charter police departments, with entirely new forces of unarmed patrol members trained in de-escalation and restorative justice to serve neighborhoods who wish to opt out of failed systems of urban law enforcement? When will the Bill & Melinda Gates Foundation, which has poured money into complex and controversial teacher metrics, drop a bunch of grants to encourage cities to collect and publish individual cops’ arrest records and excessive force complaints, and to calculate the “value added” to the life of every civilian who was “served” by an officer for the decade that followed the interaction? Why is Michael Bloomberg not breathlessly calling for an end to “last-in, first-out” police layoffs by seniority, as he has for teachers, at this moment when so many police departments are finally facing the prospect of budget cuts?

The obvious truth is that the rich philanthropists who bankroll ed reformers have no problem with modern policing. It probably makes them feel very safe. Indeed, the group that cynically calls itself Democrats for Education Reform (because it is none of those things) put out a mailer in Washington, D.C., in the middle of a nationwide police riot, to blast democratic socialist city council candidate Janeese Lewis George over a call to “divest from [police] and put that money into violence interruption programs.” Their focus on education was always guided more by the goal of breaking the power of the teachers unions than actually addressing racism and inequality.

I think I'm legally obligated to mention here that In These Times' indefatigable fact-checkers found an obscure blog post by Stand for Children' Jonah Edelman gently inquiring whether his...I dunno who even reads this? Staff? Funders? Alex Russo?...were "willing to join us in supporting advocacy efforts for meaningful police reforms as well as common sense criminal justice reforms that will make our communities safer and more just?" Sorry, I couldn't hear that one over the ringing in my ears from Stand for Children's abysmal failure to say or do anything of substance on the question of over-policing black communities.

The rank hypocrisy of the education reform movement isn’t the only lesson here. The fact that critiques of police unions align so well with the education reform agenda should give left critics of police unions pause. Why the focus on police unions, instead of police budgets and mayors? What are you trying to accomplish? Why the attacks on the beleaguered AFL-CIO? It’s not like the largest police unions, the Fraternal Order of Police or Patrolmen’s Benevolence Association, are or ever have been affiliated with it. And one of the biggest police unions within the house of labor, the National Association of Government Employees, belongs to the Service Employees International Union, which quit the AFL-CIO a decade and a half ago.

AFL-CIO aside, why focus on police collective bargaining rights at all? What democracy-tramping language do police union contracts grant that city bosses weren’t already happily giving to beat cops before the rise of public sector unionism?

The union contract that covers Chicago cops has five times as many pages as the one that covers New York City cops. Many of those pages deal with discipline and expunging of records. The New York contract is shorter because police discipline is carved out of New York’s public sector labor law; it cannot be bargained over. And yet cops in New York are as shielded from disciplinary scrutiny as those in Chicago. An officer who kills in the line of duty is allowed several days to get his story straight before facing any questioning. That’s not in the contract. It’s the discretion of police brass and the mayor’s office.

Police unions are not nearly as much of a problem as their bosses—city leaders—who hide behind collective bargaining agreements because the uglier truth is that keeping Black residents in fear remains good politics with comfortable white voters. My own mayor, Bill de Blasio, is as guilty of this as your own mayor, wherever you live.

What we on the Left should avoid is arguing that police should be stripped of the right to have a union because every argument we make will be turned around on teachers, sanitation workers and other public employees. Go ahead and argue that police departments should be defunded and abolished. I'm right there with you. And budget cuts are a pretty convenient way for democratic representatives of We The People to engage in some hard bargaining against fairly tone-deaf and entitled cop union leaders. As any member of an education union can tell you, budget cuts are a really easy way for a city to demand concessions from unions. But what’s the point of taking away someone’s ability to bargain over sick days or the ability to get reimbursed for the cost of dry cleaning a work uniform?

Finally, the vast majority of police unions are estranged from the labor movement. But the handful that have chosen to affiliate with the AFL-CIO offer a point of engagement with police leaders who are indicating that they can listen and want to be heard. If police departments can be reformed (and we should be skeptical), community-centered collective bargaining could be a reasonable experiment. Although the toxic response by the President of the AFL-CIO’s largest police affiliate, the International Union of Police Associations, to AFL-CIO President Richard Trumka’s diplomatic statement on the intersection of Black civil rights and police union rights suggests that I’m probably engaging in wishful thinking.