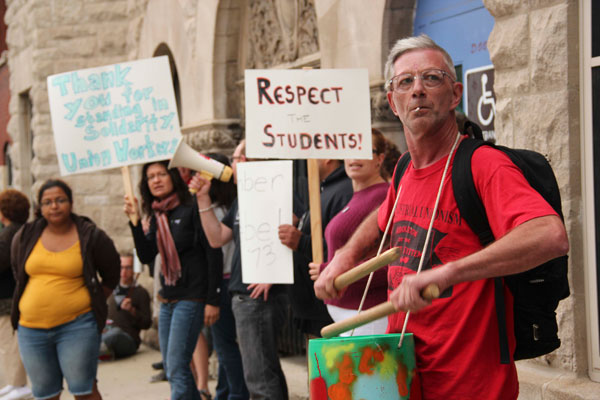 Parents stood in solidarity with union members and local residents at 5 a.m. on June 24, to meet oncoming construction crews at Whittier Elementary School in Chicago's Pilsen neighborhood. (All photos by Taylor Long)

The Struggle to Save ‘La Casita’ (SLIDESHOW)

A school occupation begins anew, as parents try to hold the Chicago Public School system to its word

Activists formed a picket line at Whittier elementary school in the early morning hours of Friday June 25, urging union crews not to cross the improvised line.

CHICAGO—The Whittier Parent Committee (WPC) has big plans for the library at the La Casita field house in Chicago’s Pilsen neighborhood. Children’s books are stacked in crates and shelves in the brightly colored space which, for now, is walled off by a curtain. There is even a social justice section–a subject parents at Whittier learned from firsthand experience.

Whittier Elementary School parents began work on the library during a successful 43-day sit-in last fall to save the field house from demolition by the Chicago Public Schools (CPS).

The occupation began anew on Wednesday, June 22, after CPS attempted to begin construction inside of the school, part of a plan to demolish a special education classroom and replace it with a small library. The parents cried foul, charging that CPS was reneging on their fall 2010 agreement to renovate the field house and misusing previously allocated funds for a costly construction project inside an already overcrowded school that would result in the displacement of special needs students.

Activists formed a picket line at the school on Friday June 24 (see slideshow), and nearly 80 people gathered in solidarity in the early morning hours, urging union crews not to cross the improvised line. Two groups guarded the main entrances to the school, while others picketed the entrance gate near the playground.

“We thought the money was going to come to us, and now that we’re here again, it was a big disappointment for me,” Whittier parent Araceli Gonzalez said. Gonzalez was at La Casita everyday last fall during the original occupation to protect the field house. She has vowed to stick it out at La Casita again, for however long it takes. “I’m waiting for the worst because I feel they’re going to come prepared knowing that everybody else is coming back,” she said.

A number of police cars showed up by 7 a.m. on Friday and blocked off the streets surrounding the school. In response, activists organized into pairs and knocked on the doors of their neighbors to build a larger presence in the demonstration. Organizers also flooded the answering machines of the Chicago Police Department’s 10th District Commander Berscott Ruiz, 25th Ward Alderman Danny Solis, State Representative Edward Acevedo and CPS offices, demanding that police leave and the scene and that CPS negotiate with the parents. The police blockade was eventually called off.

Following days of stonewalling, CPS CEO Jean-Claude Brizard finally agreed to meet with a group of 10 parents at 3 p.m. on Monday June 27 at the CPS office in downtown Chicago.

During that meeting, Brizard told the parents that CPS would apply the minimum American Disability Act (ADA) standards to Whittier by moving special needs children into a room previously used for small group interventions and construct the library in their old room. ADA standards provide a loophole for buildings built before its passage, like Whittier, meaning the plan would displace special needs students by forcing them to enroll elsewhere.

Brizard admitted to displacing students in a letter released to parents after the meeting, in which he wrote: “In the case of Whittier, there are two neighborhood elementary schools within one mile: Finkl Elementary and Orozco Community Academy. Under CPS policy, a student or parent with a disability who needs an accessible school would be eligible for transfer to one of those schools.”

As Whittier is the only dual-language school in the Pilsen community, special needs students may be forced to attend an English-only school. If CPS does displace special needs students at Whittier, parents might have to split up their kids among different schools to meet their different needs. The repercussions of the CPS plan for Whittier could be avoided, however, through the renovation of La Casita. But no official agreement was made between Whittier parents and CPS.

The budget has been a major concern for both CPS and the Whittier Parent Committee. CPS had agreed to allocate the $364,000 originally meant for the demolition of La Casita toward its renovation last fall. State Representative Acevedo was able to bring in another $200,000 for the renovation from the Board of Education. According to a financial record on CPS’ website that Whittier parent Evelin Santos said was later removed, CPS authorized a transfer of $18,840 from Citywide Capital for the interior renovation of La Casita. Where exactly the money came from is still unclear, but it’s money gone down the drain if, as the parents fear, La Casita is demolished.

CPS did not respond to In These Times’ request for comment.

Brizard told Whittier parents that construction of the library inside the school is still on the table for at least another two weeks as CPS officials continue to work with contractors on the issue.

“What do we have to do?” Gonzalez asked, wondering, “Isn’t this about democracy, about voting for what you want, about the people, about the kids?”

Gonzalez’s daughter, 10-year-old Whittier student Daniela, is going to be in 6th grade next semester. She walked the picket line on Friday, filming activists as they chanted. “I want to show everyone what is true and what is reality,” said Daniela, who wants to make a documentary about La Casita. “I want all schools to be equal.”