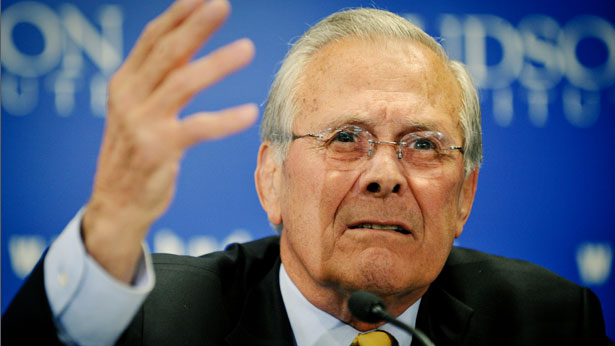 Former Defense Secretary Donald Rumsfeld speaks about his time in the Pentagon on March 29 at The Hudson Institute in Washington, D.C. (Photo by: Mandel Ngan/AFP/Getty Images)

U.S. citizens suing the former defense secretary for torture may finally get a day in court.

For the first time since the Bush administration stripped “war on terror” detainees of due process rights and redefined interrogation techniques to include torture, a federal appellate court has ruled against a high-level U.S. official in an anti-torture case. That means former Defense Secretary Donald Rumsfeld could become the first Bush-era official held liable for torture.

Donald Vance and Nathan Ertel, two Americans who worked as security contractors in Iraq in 2005, are suing Rumsfeld and other unnamed defendants for the abusive treatment they endured while detained at Camp Cropper, a U.S. Army-run prison in Baghdad.

“The defendants are arguing for a truly unprecedented degree of immunity from liability for grave constitutional wrongs committed against U.S. citizens,” Circuit Judge David Hamilton wrote in the decision. “The theory would immunize every enlisted soldier in the war zone and every officer in between … from civil liability for deliberate torture and even cold-blooded murder of civilian U.S. citizens.”

Together, Vance and Doe are the only cases out of more than a dozen brought against Bush administration cabinet-level officials for their alleged roles in war on terror transgressions to be allowed to proceed to trial. All other claims have been dismissed, often blocked by the “state secrets” defense, which maintains that U.S. national security would be compromised if information about the cases were made public.

One such case was that of Khaled el-Masri, a Lebanese-born German citizen whom the CIA mistook for an al-Qaeda operative with an identical name. In 2004, the CIA held him in a black-site prison in Afghanistan for four months, regularly beat him and then abandoned him–emaciated and penniless–in the boondocks of Albania. El-Masri sued former CIA Director George Tenet and others, only to have the Supreme Court dismiss the case in 2007.

Most recently, in May, the U.S. Supreme Court granted immunity to former Attorney General John Ashcroft, ruling that Abdullah Kidd, a U.S. citizen, could not sue Ashcroft personally for his treatment by FBI agents in 2003. Kidd was held as a suspect for two weeks without probable cause, and alleged that the FBI, under Ashcroft’s supervision, held him as a material witness for a separate trial to justify his detainment. The FBI never called him to testify.

The fact that the court was unanimous in its decision–despite the consolation from four justices that the ruling did not say the FBI’s actions were legal–may portend trouble for the future of Vance and Ertel’s claims against Rumsfeld. Chief Justice John Roberts was concerned about the chilling effect that allowing suits against officials could have on public service.

Mike Kanovitz, the attorney for Vance, Ertel and Doe, said that the Supreme Court’s ruling against Kidd shouldn’t affect the future of Vance. “In Ashcroft’s case, they were looking at ‘absolute immunity,’ a specific kind of immunity for prosecutors, which, being the former Attorney General, was available to Ashcroft.”

The “qualified immunity” that Rumsfeld sought with his defense is available to high-level officials who prove that a “reasonable person” would not have known that his actions violated the law. Because, as Vance and Doe allege, Rumsfeld crafted the guidelines for “enhanced interrogation” methods, changed them repeatedly to skirt congressional legislation limiting their use and in 2003 sent Major Geoffrey Miller with orders to “gitmotize” Camp Cropper, the courts have decided not to extend such immunity to Rumsfeld.

Rumsfeld has to decide what comes next, says Kanovitz. He could appeal Doe and ask the 7th Circuit court to take another look at Vance, before petitioning the Supreme Court to hear his case.

If Vance, Ertels and Doe win their cases and receive financial restitution, Attorney General Eric Holder might be emboldened to pursue criminal charges against Rumsfeld and other Bush administration officials who oversaw human rights abuses. But don’t count on it: Obama has publicly stated that he doesn’t want to be “looking backwards” at the issue and successfully pressured Spain–in a 2009 letter later published by WikiLeaks–to drop its war-crimes investigation of former Vice President Dick Cheney and Attorney General Alberto Gonzalez, among others. As ever, Bush administration officials remain very far from prison.