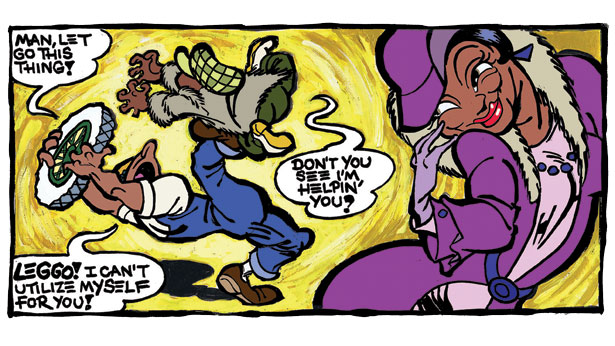 Throughout the collection, the writing and the art are good enough to deserve the attention of readers who have no special interest in black literature--or in comics.

For more than a decade, Eureka Productions has been converting 19th- and 20th-century literature – Poe, Wilde, Stevenson, Alcott – into high-quality graphic novels. The Graphic Classics series reminds us of the comic genre’s literary potential and harkens back to the popular origins of much of our most revered literature.

The twenty-second volume, African-American Classics, the first in the series to feature the work of black authors, has adapted 23 stories and poems by writers such as Langston Hughes, Zora Neale Hurston and W.E.B. Du Bois.

The stories and poems were written between 1891 and 1931, and predictably, the Harlem Renaissance predominates. More than a third of the selections included were published in 1922. The literature is old, but the art – all of it by contemporary African Americans – is new.

Race is the unifying theme of the book, it being what all the writers and artists share, and the African-American experience is present, in both large and small ways. Some of the pieces represent a kind of protest literature, exposing the cruel and absurd inequalities of American society. Others celebrate blackness in its various forms, embracing the sense of community, taking pride in the cultural heritage, or meditating on the physical beauty of black features. But nothing in the book is only about race, and it would be wrong to try to reduce any of these pieces to a single dimension. There are stories here about war, loneliness, magic, neighborhood life, morality and the foibles and flaws that so often characterize humanity.

Besides race, other kinds of inequality also receive attention. Gender discrimination and violence against women feature prominently. Poverty is an element in almost all of the stories, though usually in the background. In the story “Shalmanezer,” however, the abolitionist and suffragist Frances E.W. Harper notes the suffering of toiling workers and starving children (whom illustrator Lance Tooks portrays somewhat pityingly); and she attributes their misery to the upper class’ single-minded pursuit of riches.

The featured artists relate their images to the text in diverse ways. In some cases – John Jennings’ single, striking image for Claude McKay’s poem “America” is one example – the visuals are an artistic response to the literature, but either could stand on its own. In others, such as Keith Mallett’s art for Effie Lee Newsome’s “The Bronze Legacy,” the visuals illustrate the story, and therefore depend on the text. And in some – comics in the purest sense – the image and the text are interdependent. Leilani Hickerson’s art for Ethel M. Caution’s “Buyers of Dreams,” is perhaps the best example. In this fantastic morality tale, three young women enter the “Shop of Dreams,” and each selects the dream that she believes will bring her happiness. The plot is simple, the writing is plain, and the vivid images are literal in their approach. However, one could not get the whole story by reading the narration and dialogue, nor merely decipher the action in the pictures; the meaning exists in their interrelation. The words on the page tell us what is happening and move the action along, but the art sets the tone, showing us how ordinary, and also fabulous, the events depicted really are.

The most interesting pairing of art and lit occurs in Milton Knight’s illustration of what is the funniest story in the book, Zora Neale Hurston’s “Filling Station.” The plot is really just a series of humorous encounters in a gas station at the border of Alabama and Georgia. The point of the story is not so much what happens, but the rhythm and the texture of the presentation. Hurston’s depiction of African-American speech – “Cause dem crackers y’all got over there sho is hard on de black man” – has always been controversial, with some considering it a racist parody, and others seeing it as homage to an unique idiom. Knight’s illustrations handily reflect that tension, incorporating both exaggerated elements of caricature and the rounded edges and bright colors associated with hip-hop and graffiti art. Incidentally, the cartoon depiction of the capable, assertive, attractive female character – with her slanted, brimmed hat, wavy hair, prominent cheekbones and highly arched eyebrows – is modeled on Hurston herself.

Throughout the collection, the writing and the art are good enough to deserve the attention of readers who have no special interest in black literature as such – or in comics.

The range of material is, likewise, broad in subject and style. Poetic compositions, comedic sketches, fairy tales, political fables and pulp thrillers stand side by side. And the art is likewise diverse: Larry Poncho Brown’s images for Paul Laurence Dunbar’s poem “We Wear the Mask” are inspired by traditional African masks, while Tooks’ illustrations for “Shalmanezer” fall more in the Classical and Orientalist traditions. Trevor Von Eeden and Adrian Johnson’s art for Florence Lewis Bentley’s story “Two Americans,” and Jim Webb’s for Robert Bagnall’s “Lex Talionis,” would fit easily within the pages of the Weird War Tales or House of Mystery comics, respectively – suitable venues for stories involving mad scientists, ghosts and lynchings.

The book’s one misstep is censoring the W.E.B. Du Bois story “On Being Crazy.” The word “nigger” occurs several times in the original but has been rendered as “n*****.” The offensive, hurtful effect of the word is, in fact, part of the story’s message, as is the refusal of the dignified narrator/protagonist – depicted here as Du Bois himself – to give the word any power over him. Its obfuscation therefore seems counter to Du Bois’ aims. Publisher Tom Pomplun says that he and the volume’s editor didn’t want it excluded from the main market for Graphic Classics: schools and public libraries. But such a judgment seems somewhat odd, given that elsewhere in the book other slurs – “a damned spade,” for one – are left unaltered, and we are shown several disturbing scenes of mob violence, including explicit images of black men being burned alive.

For readers, like me, whose education offered little exposure to black art, and almost none to black literature, the experience of reading African-American Classics is enlightening, exciting and humbling. One hopes that this volume may be just the first step in an overall broadening of the Graphic Classics canon, and that the transposition of these literary works into the comics medium will help them reach a wide audience – not only a whiter audience (though that is likely), but an audience among comic book readers who don’t yet realize that their tastes also run to the literary.