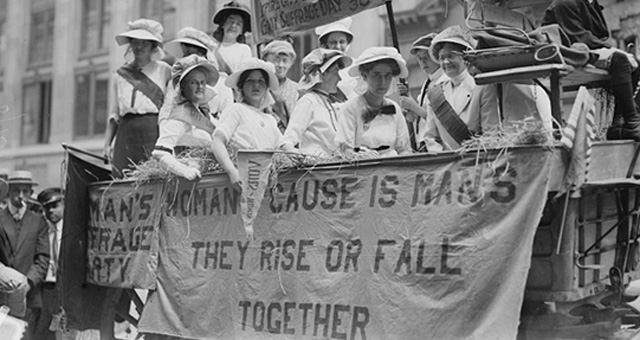 Some suffragettes in action. (Library of Congress)

Citizens United and the 19th Amendment

What campaign finance reformers can learn from America’s suffragettes.

It’s impossible to know how far a movement is from achieving its goal until that goal becomes reality.

When the Supreme Court handed down the Citizens United decision in January 2010, President Obama described it as “devastating to the public interest” and promised that he would work to “repair the damage that has been done.” It was supposed to be among his top priorities.

If working to reverse Citizens United has been one of Obama’s priorities, though, it’s been a well-kept secret. He rarely mentions it, and in February he reversed himself and decided accept funding from a Super PAC that’s raising money for his election campaign. (Citizens United allows Super PACs – or “political action committees” – to raise unlimited cash contributions from individuals, almost always on behalf of a particular candidate or cause.)

But in truth, the momentum for reversing Citizens United was never going to come from the White House, much less from Congress. Both are too deeply enmeshed in the system to invest much effort in reforming it. The energy to defeat the ruling will come, if it comes from anywhere, from old-fashioned grassroots activism. And on that front, the outlook is more promising than you might guess. There’s good news and bad news, and some more good news.

The first piece of good news is that Citizens United isn’t a partisan issue: a substantial majority of voters favor imposing limits on the influence of money and lobbyists in American politics. In a poll (PDF) released in January by the firm Greenberg Quinlan Rosner, 55 percent of respondents said that corporations should not have the constitutional rights accorded to individuals. Eighty percent favored limiting campaign contributions and spending, and 89 percent of independent voters favored “reasonable limits.” Two-thirds of the latter group said that “campaign finance reform is a very important factor in their vote.” The same was true for 69 percent of Democrats and 56 percent of Republicans.

The bad news is that reversing Citizens United is only the first step if we’re serious about addressing corruption in American politics. To believe that reversing the ruling a panacea is to believe that “our democracy was fine and Citizens United broke it. But of course, the democracy was already broken,” as Lawrence Lessig, who directs the Edmond J. Safra Center for Ethics at Harvard, has observed. In his recent book, One Way Forward, Lessig argues that the Left and the Right can agree that the influence of money is a major reason for the corruption of our politics. His manifesto calls for them to join forces and replace the current system with public financing and limited private donations.

The second piece of good news is that there is a well-marked path toward achieving both the immediate goal of overturning Citizens United and the broader goal of replacing our current system of campaign finance. It involves building on the accomplishments of campaigns at the state and local levels during the last two decades.

In 1996, Maine passed legislation that provides public financing to candidates running for all state offices. Arizona and Massachusetts did the same, both via ballot initiatives, in 1998. (The Arizona Citizens Clean Elections Act was struck down by the U.S. Supreme Court in 2011. The Massachusetts law was repealed after the state supreme court declared it unconstitutional.) Several other states have passed similar legislation or have initiated pilot programs that experiment with some level of public financing of elections: Connecticut, Hawaii, New Mexico, North Carolina, New Jersey, Vermont, West Virginia and Wisconsin, where public financing of the state’s Supreme Court elections went into effect just last year. At least two cities – Portland, Oregon, and Albuquerque, New Mexico – have also passed public-finance legislation.

And in what may become the most momentous development yet for clean elections in the United States, a coalition in New York launched a campaign this week to build support for public financing of the state’s elections. The coalition consists of several wealthy backers, including one of the founders of Facebook. But unions and MoveOn.org have also signed on. It’s the kind of ideologically diverse coalition that Lessig envisions. The members hope that New York “could become a national model for the effort to free elections from the grip of big money,” according to an article in The New York Times.

Building on state-level activism and incremental progress – with the ultimate aim of passing a constitutional amendment that addresses both Citizens United and the general corruption of our politics – has an important precedent. It was the strategy used by the woman suffrage movement a century ago, at a time when passing an amendment that guaranteed women the right to vote seemed about as likely as purging corruption from our politics seems today.

The state of Washington passed woman suffrage legislation in 1910, and several states followed suit over the next two years – Arizona, California, Kansas and Oregon. In the 1912 presidential election, woman suffrage became a plank in the Progressive Party platform. But despite this apparent momentum, there was little movement toward the goal of passing a constitutional amendment during the next four years.

In 1916, Carrie Chapman Catt – head of the National American Woman Suffrage Association – called on NAWSA’s state chapters to engage in a “red-hot, never ceasing campaign” to pressure state legislatures. That campaign – along with the agitation of a more militant faction of suffragettes, who focused primarily on passing a constitutional amendment – turned the tide in the last third of the decade. Several more states granted at least limited suffrage in 1917 and 1918, and the U.S. Senate passed the woman suffrage amendment in 1919. It was ratified by three-fourths of the states the following year.

At least two relevant morals can be drawn from this history. One is that the leaders of the political parties might be pressured into doing the right thing, but they will rarely lead the way. In 1916, a suffragist described the Democratic Party as “the chief enemy in our path,” because party leaders had “declared for Suffrage, state by state” but had done little to actually help achieve victory. Woodrow Wilson was the prototypical hedging Democrat who didn’t exactly oppose but didn’t exactly support reform. He didn’t endorse the constitutional amendment guaranteeing women the right vote until 1918, two years into his second presidential term – and a year after he had led the United States into war on the premise of making the world “safe for democracy.”

The other moral is that it’s impossible to know how far a movement is from achieving its goal until that goal becomes reality. When a wave of Western states began passing woman suffrage legislation in 1910, it had been fourteen years since the last state, Idaho, had done so. When suffrage became part of the Progressive Party’s platform in 1912, it must have seemed that victory wasn’t far off. Yet it took seven more years of struggle, including a period when the momentum of 1910-1912 seemed to fade, to reach the goal. And no one knew, at any point along the path, when or if the constitutional amendment would ever pass.

So here’s a final piece of good news: genuine reform might be closer than it seems. Even before Citizens United dramatized the need for campaign finance reform, organizations like Public Campaign and Public Citizen had been working for such reform, and Rootstrikers and Progressives United (founded by Lessig and former Sen. Russ Feingold, respectively) have now joined the cause. They offer institutional channels for activism that strikes directly – as the name of Lessig’s organization suggests – at the roots of corruption in our political system.

Will that be enough? The one certain thing is that, as Barack Obama used to say, we are the change that we seek. It’s now clear that by “we,” he meant you and me. What sounded like a promise in 2008 was actually a warning: if we don’t do it, it won’t get done. The president, even if he has the inclination, doesn’t have the power. The Congress is so corrupt that it can’t even begin to think about how to reform itself.

Yet, for all that, it’s just possible that we’re on the brink of something big. It might be ten years away. It might be a year away. No one knows.