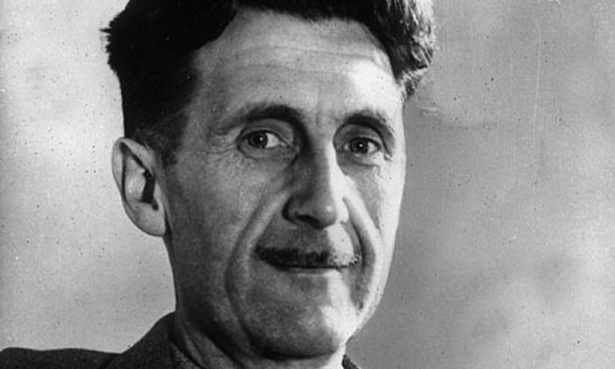 George Orwell's struggle for mental freedom at the BBC became the basis of the central conflict in "1984."

Some at the BBC fear commemorating George Orwell because he was ‘too left-wing.’ They probably shouldn’t bother anyway.

A few weeks ago, the Telegraph reported that BBC director Mark Thompson had vetoed a proposed statue of George Orwell on the grounds that the writer was “too left-wing.”

There are surely better reasons not to adorn BBC headquarters with Orwell's image.

Orwell is not, I think, a figure suited to being cast in bronze. He was naturally suspicious of “great men,” averse to hero-worship, and believed that “saints should always be judged guilty until they are proved innocent.”

Besides which, Orwell's feelings about his former employer were not always friendly. Though he publicly insisted that “in my experience the BBC is relatively truthful,” he privately described the organization as “a mixture of whoreshop and lunatic asylum.”

Orwell worked for the BBC Eastern Service from 1941 to 1943—“two wasted years”—producing cultural programming and writing commentary on the progress of the war.

The situation was deeply ironic. As he wrote to his superiors, responding to an Intelligence Officer's suggestion that they capitalize on his notoriety, “If I broadcast as George Orwell I am as it were selling my literary reputation, which so far as India is concerned probably arises chiefly from books of anti-imperialist tendency, some of which have been banned in India.” This reputation, based partly on his books being suppressed as subversive to English rule, became an asset in the propaganda effort to promote loyalty to the Empire. Therefore, Orwell reasoned, to preserve his credibility “as an independent and more or less 'agin the government' commentator,” he would have to be allowed “reasonable freedom of speech”—though he also offered to “avoid mention of subjects on which I could not conscientiously agree with current Government policy.”

Such silence was not only prudent, it was directly enforced:  Orwell's commentary was subject to a triple censorship. Before broadcast, his scripts had to be cleared by the Ministry of Information both to avoid breaches of security and to ensure congruence with official policy. Then, during the broadcast itself, an Anglican clergyman listened from the control booth, ready to kill the mic should the discussion start to stray.

Though he could not say everything he wanted, Orwell at least avoided saying things he didn't want to say. “On no occasion,” he wrote in his resignation letter, “have I been compelled to say on the air anything that I would not have said as a private individual.”

But that is not to suggest that he always told the truth. As he recorded in his diary: “one rapidly becomes propaganda-minded and develops a cunning one did not previously have.” For example: “I am regularly alleging in all my newsletters that the Japanese are plotting the attack Russia,” even though “I don't believe this to be so.” Under the circumstances, Orwell thought, perfect honesty was not merely a luxury, but an impossibility. He reasoned, in the same diary entry: “All propaganda is lies, even when one is telling the truth. I don't think this matters so long as one knows what one is doing, and why.”

Therefore, at the BBC, Orwell's standard became not public truthfulness, but a kind of private clarity. One could utter falsehoods, as long as one did so resolutely, with clear purpose and without self-deception. The point was not so much to speak the truth, but to preserve one's own outlook, the sense that there is a truth independent of any doctrine, or any party's line. One could become a liar and yet retain a sense of integrity.

That struggle for mental freedom, the notion that one might find refuge in his own private thoughts, became the basis for the central conflict of 1984. And Orwell's refusal to believe the lies, even those of his own side, constantly created friction with doctrinaires of all kinds, from Stalinists to anarchist-pacifists. As he wrote in an exchange with Alex Comfort:

All propaganda's lying, yours or mine;

It's lying even when its facts are true; …

But there are truths that smaller lies can serve,

And dirtier lies that scruples can guild over; …

It's mean enough when other men are dying,

But when you lie, it's much to know you're lying.”

Still, Orwell may not have been entirely satisfied with his own justifications.  As he made his plans to resign, he wrote to Rayner Heppenstall:

Re cynicism, you'd be cynical yourself if you were in this job. However I am definitely leaving it probably in abt 3 months. Then by some time in 1944 I might be near-human again & able to write something serious. At present I'm just an orange that's been trodden on by a very dirty boot.

If we are to memorialize Orwell with a sculpture, let's not place him on a pedestal at the BBC.  It would not serve his memory well, and the BBC does not deserve it.

Let the sculpture show him, instead, dressed as a tramp sleeping rough in Trafalgar Square, or notebook in hand, sitting with a miner next to the pit in Wigan, or pushing a stroller with his little boy near Canonbury Square, or holding an ancient rifle, shivering in a trench in Spain.

Most of all, let's be clear-sighted in our view of this great writer. A statue of Orwell should be life-sized, and no bigger.