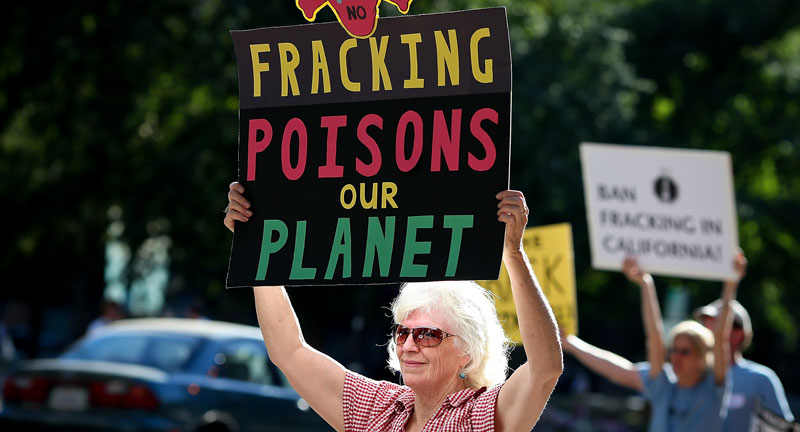 Protestors hold signs against fracking during a demonstration outside of the EPA headquarters on July 25, 2012, in Sacramento, Calif. (Justin Sullivan / Getty).

Greens are divided on whether to regulate fracking or hold out for a ban.

"I think it will be very difficult to get the cat back in the bag. ... When you pass these kinds of overarching regulations, which provide a full framework for fracking operations, that gives a green light to industry."

At the end of May, five Illinois environmental activists were arrested during a three-day sit-in at Gov. Pat Quinn’s office in an attempt to block legislation that critics say will open the floodgates to hydraulic fracturing in the state. Demonstrators denounced the governor for promoting the legislation without ever visiting a fracking site, but some grassroots activists had another bone to pick—with the Natural Resources Defense Council (NRDC), the Sierra Club and a handful of other environmental organizations that helped shape the bill.

Proponents of Illinois’ Hydraulic Fracturing Regulatory Act (SB1715), which was signed into law on June 17, say that it will provide a stopgap mea- sure in the absence of federal regulations on the controversial practice. With the prospects for fracking moratoriums looking uncertain in other states—at the end of May, the California Legislature killed three such bills—some are looking to the Illinois regulations as a state-level model. But in light of the health and environmental risks associated with fracking—and uncertainty, given the secrecy of the industry and lack of disclosure requirements, about how widely fracking is already occurring—others believe that the environmental movement should accept nothing less than an all-out ban.

What does this legislation change about the landscape for regulations in the state of Illinois?

Josh: Before this bill was signed, fracking was completely legal and available to anyone who had $100 for a permit. That is a really ugly situation.

The regulations passed were not perfect and are nowhere near stringent enough to make fracking safe. But they include some strong pieces, including an assumption of liability for frackers if contamination appears in the water near their activities, and protections that allow citizens to challenge permits and to take part in that process, and an array of other information-gathering pieces that just didn’t exist.

Kristen: This legislation is not based on a scientific determination of what is safe and isn’t safe. It is based on a political determination of what politicans were telling the environmental community would be achievable. This bill—which was a compromise bill that was hashed out by industry and a very select group of “Big Green” organizations—really provided the oil and gas industry the road map that it needed to come and use the state of Illinois as a factory plant. Before that, the industry was holding off because of uncertainty.

Illinois’ regulations are being hailed as the strongest in the nation, but in four other states, there are currently moratoriums on fracking until its health and environmental impact can be studied more completely. Which approach should environmental activists be pursuing?

Sean: We’re at a crossroads on this question. There’s an enormous amount of pressure to make all sorts of pragmatic accommodations because of the power of the industry and the enemy we’re facing. But the effectiveness of regulation would require a level of honesty from the industry that I don’t think it’s likely to ever adhere to.

Josh: The NRDC and a host of other groups from the environmental community have attempted without success to pass a moratorium on fracking in Illinois for the last two years. I wish that many of the critics who have been loud of late would have been more engaged earlier. Ultimately, when powerful interests in the state of Illinois were looking to advance regulations, the environmental community was left with a very difficult decision of whether to engage in the discussion on potential regulatory rules. The decision we made was that it would be a big mistake to move forward and allow industry to sit down at the table with politicos and basically write their own rules. The NRDC and several other environmental groups were selected to sit down and represent the community at the table.

Kristin: In New York state, the exact same discussions were had: “Should we continue to push for a moratorium that doesn’t look politically feasible?” But they decided to fight for what they knew was right, and they won [an extension to the moratorium implemented in 2010]. When the movement against fracking has been successful, it’s because groups have come together to determine their own future, instead of having some backdoor deal where the industry, politicians and a very select few green groups decide what is going to happen in the rest of the state. From our perspective, the approach to this bill was flawed not only scientifically, but democratically.

Many major national environmental organizations at one time endorsed natural gas as an alternative to coal. Is there still a gulf between these Big Green groups and grassroots ones on the question of fracking?

Josh: Frankly, I’m a little concerned about the narrative of division within the movement that’s emerged following this fight. There are differences from state to state. In Illinois, fracking is already occurring, and we simply didn’t feel as though leaving people in this state completely exposed to the known risks of fracking was a tenable position. Ultimately, we would have preferred for a moratorium to move forward, and we are very interested in working on that in future sessions.

Kristin: I think it will be very difficult to get the cat back in the bag. In Illinois, the reality was that fracking wasn’t happening. But when you pass these kinds of overarching regulations, which provide a full framework for fracking operations, that gives a green light to industry.

Josh: The fact that NRDC was able, through a Freedom of Information Act request, to find one frack job from 2012 makes it clear that that’s probably just the tip of the iceberg.

What impact are labor’s positions on this issue having on the strength of the movement against fracking? During the fight in Illinois, we saw the state AFL- CIO and other labor groups join with industry to lobby for this legislation. Elsewhere, the building trades unions have helped lobby for fracking in the Marcellus Shale basin.

Sean: Many unions have no position whatsoever on fracking, which is astonishing when you think about the amount of noise there’s been around this issue. What’s at stake in the labor movement at the moment is not just about one project, it’s the advancement of an agenda based on domestic fossil fuel development. The export and building trades, in particular, are fully on board with that agenda, and at the moment, too many big unions are avoiding this fight. Meanwhile, too many of the mainstream environmental organizations are quite happy with market mechanisms and liberalization of energy markets.

So we all have to do some learning and rethinking. The vision we put forward has to be a clear one: We’re against extreme energy. We’re for equitable, sustainable renewables built on community-based power.

Is it possible, given present divisions, to build the kind of coalition that could advance this vision?

Josh: The fight against the Keystone XL pipeline is one where everybody is on the same page and moving forward, and it has certainly achieved a lot. The fracking issue is somewhat different in that there are varying landscapes in different states. But if we’re going to win these fights, we need to be bringing folks together.

Kristin: Obviously we are always stronger together. But it is important that all groups be respected in their interests and their approach, and that  didn’t happen in Illinois. There are still a lot of opportunities for environmental groups to be working together, though. We’re excited to have that happening as we move forward with a push for a moratorium in California.

Sean: There’s a cautionary footnote to this discussion of coalitions: The danger is that they often become the lowest common denominator. What I would rather see, instead of a broad coalition that can’t make decisions or be clear on something as important as Keystone XL or fracking, is to have a group of unions who put forward a different vision and are prepared to fight those who are in alliance with the industry. Even though that’s not unity, it’s more productive to have that and have a real debate inside the movement about which side you’re on.