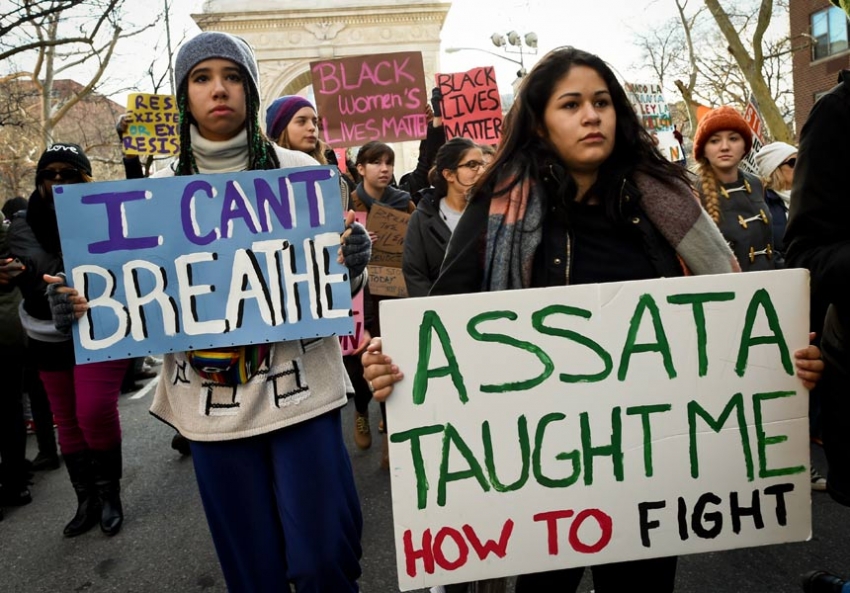 The Women Behind Black Lives Matter

The ‘leaderless’ movement is being propelled by the efforts of women of color.

What few realize, however, is that a movement often described as “‘leaderless,” and largely framed by the bodies of slain black men and boys, is being propelled by the efforts of women of color.

Last summer’s killing of Michael Brown by Ferguson, Mo. Police Officer Darren Wilson, followed by the Ferguson Police Department’s decision to allow Brown’s body to lie prone on a hot summer street for four-and-a-half sultry hours, combined with an expanding list of unarmed black people slain by police—Eric Garner, Tamir Rice, Akai Gurley—has transformed America into a country where nightly protests against police violence are all but obligatory. While white Americans on conservative news programs may rage about the criminal tendencies of those slaughtered, protests have emerged not just in Ferguson but in Washington, D.C., Oakland, Chicago, Bloomington, Minnesota, Los Angeles, New York, and internationally in London, Paris and even Tokyo. Activists in Palestine have expressed solidarity with the Ferguson protesters. Qui tacet consentire videtur, “silence implies consent,” and many people want it made clear that they do not consent.

What few realize, however, is that a movement often described as “‘leaderless,” and largely framed by the bodies of slain black men and boys, is being propelled by the efforts of women of color.

The Nov. 24, 2014 decision that Darren Wilson would not be indicted in the shooting death of Michael Brown prompted Synead Nichols, 23, and her friend Umaara Elliott, 19, to organize what would become Millions March NYC. It began as a Facebook event. “We maxed out everyone on our friends list,” says Umaara, “and they started RSVPing and resharing.” The website www. millionsmarchnyc.org debuted about a week later, and a Twitter handle, Instagram account and even a Tumblr page soon followed.

The two are quick to point out that they had support from many organizations, including Million Hoodies, Ferguson Action, Justice League NYC and Black Lives Matter. In the end, the Dec. 13, 2014 protest lasted more than five hours and, at its peak, stretched across 19 city blocks. Estimates of the turnout range as high as 50,000—more than Al Sharpton’s DC-based Justice for All March that took place on the same day—but unlike Justice for All, you could come away from the action without learning the names of the organizers. They’re not hiding, says Elliot, but “no one is intent on being a leader.”

Similarly, Carmen Perez, cofounder of Justice League NYC (and executive director of its parent organization, The Gathering for Justice, founded by Harry Belafonte), organized one of the highest-profile #BlackLivesMatter actions: a “die-in,” in which protesters lie down as if dead, in front of Brooklyn’s Barclays Center, where Prince William and Kate were attending a Brooklyn Nets game. “They came to see the pageantry and look at the beautiful things in New York City”, says Perez. “We wanted them to see that black people were dying and to feel and see our pain.” Justice League NYC had ensured that players, through Jay Z, had access to t-shirts bearing the phrase “I can’t breathe,” Eric Garner’s words as he was killed by NYPD officers. Cleveland Cavaliers players LeBron James and Kyrie Irving wore the shirts during their warm-up.

Look into the roots of other #BlackLivesMatter protests, and you’ll often find women like Nichols, Elliott and Perez. Ferguson’s Millennial Activists United, founded in the wake of Brown’s death, was created by three young women of color, Ashley Yates, Alexis Templeton and Brittany Ferrell (after meeting in Ferguson, Templeton and Ferrell married in January).

The hashtag that has become the movement’s signature, #BlackLivesMatter, was itself coined by three black queer women, in response to George Zimmerman’s acquittal in the killing of Trayvon Martin. To be sure, some of these groups are driven by black men— the Dream Defenders is led by Phillip Agnew, and Million Hoodies was launched by Daniel Maree. But why, in a movement triggered by violence against black men, are women playing such a central role?

The simple answer is that women also suffer at the hands of police. They suffer indirectly—in the loss of sons, fathers, husbands, and boyfriends— but also directly. While scant data exists on how many women are killed by law enforcement, we know that cops kill unarmed black women, too. Their names are less well known: Rekia Boyd, Aiyana Stanley-Jones, Yvette Smith. Jones was only 7.

That “black lives matter” so quickly gets mentally translated into “black men matter” is less a product of racism than one of sexism. We live in a society that frequently devalues the rights and existence of women. Issues that affect men are social issues; issues that affect women are “women’s” issues. That black men are incarcerated at six times the level of white men is a travesty. That black women are incarcerated at three times the rate of white women is all but ignored as is the fact that in school black girls, like black boys, are more likely to be the recipients of far more punitive disciplinary actions than their white peers for the same offense. Nichols points out, “We connect to images of men because of how women are portrayed in society and in the media: We are not seen. We are silent. The woman is meant to be on the sideline and hushed.”

We see this in the way that the deaths of black women often go unreported, but also in the invisibility of the women doing the behind-the-scenes organizing in a movement that the media so often describes as leaderless.

“When people say ‘leaderless,’ ” says Ashley Farmer, a postdoctoral fellow in Duke University’s history department, “they are often just not seeing the women who are spearheading it.” Women played a key role in organizing the 1963 March on Washington, for example, but none were included among the day’s keynote speakers.

It could be that what’s taken as leaderless is actually collaborative. When we’re used to a top-down organizational structure headed by a charismatic, traditionally male leader, protests that break that mold eschew easy framing. Mechanisms like Facebook, Twitter and even email allow individuals to say, “I’m going to do this, come join me.” Those who don’t define themselves as leaders can galvanize tens of thousands.

Nichols, however, bristles at the way this can erase women’s contributions. “It’s almost as if woman and leader can’t be synonymous, and that’s not true,” she says. “It’s important for women to stand up and make it known that these movements are not leaderless— although they are collaborations among many people, there are women stepping up and making advances.”