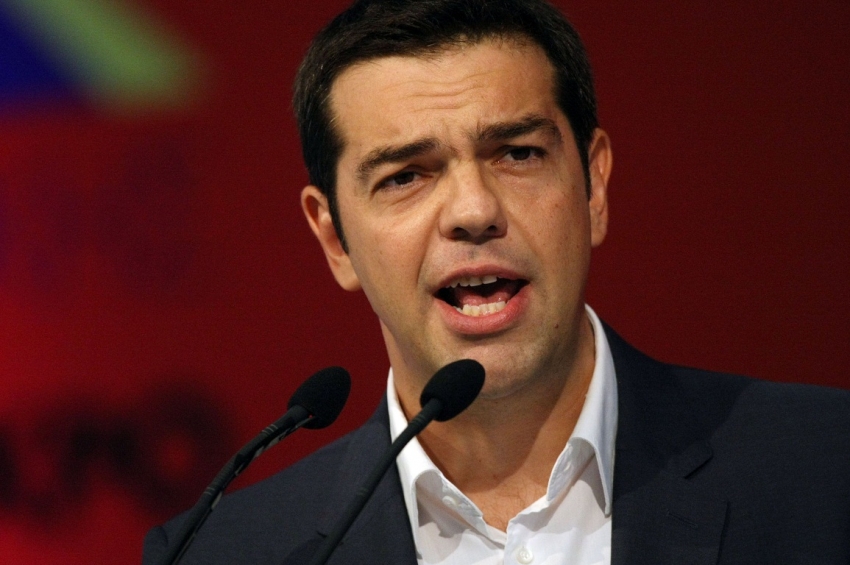 Why Syriza Hasn’t Threatened to Leave the European Union—Yet

Syriza sees a way out of the Eurozone paradox.

These are desperate times for the people of Greece.

Heading into a frenzy of meetings with Eurogroup finance ministers and heads of state this week, the Syriza government is preparing for all scenarios and developments. On Tuesday, Greek finance minister Yanis Varoufakis told the members of parliament that Greece is entering the post-bailout era. Meanwhile, his German counterpart, Federal Minister of Finance Wolfgang Schäuble, commented later in the day that no negotiation would happen. The future is still indiscernible.

With an emergency meeting of Eurogroup finance ministers this past Wednesday, a full summit yesterday, and a scheduled meeting of finance ministers on Monday that coincides with the deadline for extending the bailout, what isn’t being said by Greece’s Syriza government may be more important than what is. The outcome of the talks will determine which is realized: the will of the Greek people or the Troika.

On Sunday, Prime Minister Alexis Tsipras vowed to continue fighting for debt renegotiations while prioritizing the “humanitarian crisis” brought on by years of harsh austerity. He also signaled that frugality would be best exemplified on the governmental level by selling off half of the government’s limousines and a jet. He did not, however, mention any plans to lead Greece out of the Eurozone.

With all the talk of a “Grexit,” it’s important to note that Syriza has yet to threaten a Greek departure from either the European Union or the Eurozone. Yet European officials, and even the defrocked high priest of free markets, Alan Greenspan, have been warning of Greek exit from the European Union.

So why isn’t Syriza currently threatening to leave the Eurozone?

Well, first there is the question of public opinion. Recent opinion polls indicate that as many as 70% of Greeks hope to remain within the currency union. The undertaking of any radical steps by Syriza will require building long-term political support on the home front by sticking to the democratic will. That means a Eurozone exit while the country overwhelmingly opposes such an exit must be off the table—at least for the time being.

Syriza, leading a fragile coalition government, appears to be planning for all contingencies. The radical left coalition understands that negotiations with the Troika (the European Central Bank, the European Commission and the International Monetary Fund) have broad implications on the long-term health of the E.U. as well as global trade treaties favored by the United States.

Syriza holds two mandates. First, it must end the social catastrophe that many Greeks blame on E.U.-imposed austerity. Second, it must appear committed to keeping Greece within the European Union. In some ways the two seem antithetical, but Syriza believes they aren’t.

To achieve the first, Syriza needs debt restructuring or forgiveness, a reformed taxation scheme and continued funding for social programs. In short, it needs the European Union, as such tasks probably cannot be carried out without it. But the Troika holds that no restructuring is possible and that Greece must stick to its commitments or leave the currency union.

If the polls are to be believed, had Syriza begun negotiations with European officials by threatening to leave the E.U., it would have faced a political disaster on the home front.

That may be why last week, the government sent its economics professor-turned-finance minister Yanis Varoufakis on a multi-nation tour in hopes of winning support for his “modest proposal to save Europe.” Varoufakis’ proposal includes a bridge agreement that would hold Greece over for a few months until a new agreement can be worked out.

The night before his meeting with Schäuble, the German finance minister, the European Central Bank announced it would no longer accept Greek government bonds as collateral for loans to Greek banks. And as expected, Schäuble rejected any talk of restructuring the Greek debt.

Despite warm receptions for Syriza officials in Italy and France last week, those governments held the E.U. party line and backed the German and Troika officials’ insistence that Greece remain on the program of bailout, austerity and debt payments.

But this, too, is politically untenable in Greece, where the austerity-crippled population strongly favors ending a program that has seen suicides, homelessness and poverty skyrocket.

A Way Out By Staying In

Syriza sees a way out of this paradox.

Consider the statements by the party’s other prominent economist, Costas Lapavitsas, in the Guardian: “First, the forces of austerity currently strangling Europe should not be allowed to crush the Syriza experiment, or turn it into a moth-eaten compromise; second, Syriza should make solid and meticulous preparations for all eventualities, a point that is well understood by many within it.”

Having expected harsh resistance and an onslaught of veiled threats from the financial community, it would be naive to imagine Syriza hasn’t prepared for this exact scenario. If Varoufakis’ proposals, which are viewed as reasonable by most Greeks, are rejected by E.U. officials, more Greeks will consider leaving the European Union a necessary evil.

At that point, if a Syriza government still exists, Greece can threaten to leave the union. (It should be noted that in his book Crisis in the Eurozone, Lapavitsas has supported a Greek exit from the Eurozone and has argued that austerity throughout Europe has been counterproductive.) That’s when the German government’s mettle will be tested. Can the European Union afford a “Grexit” and its potential implications for Spain and other austerity-ravaged countries?

A Syriza government that remains in the union poses a problem for Germany and the United States on another front. Syriza has made it clear that it will veto any attempt to ratify the Trans-Atlantic Trade and Investment Partnership, an international trade agreement that both Germany and the U.S. want ratified urgently.

At that point, does the E.U. want Syriza to capitulate on a debt if it means the loss of the TTIP? Perhaps a Greek exit benefits the E.U. on that front. But can the E.U. afford to let Greece out if it means destabilizing the currency union further?

The future of Greece and that of other austerity-sacked countries in the E.U. is affixed to the democratic will of the people, the rationale of finance, and the geopolitical aims of U.S. hegemony. A way out—or a way to remain in—will rely on alternative solutions and commitment on the part of Syriza.

The ancient tragedian Euripides tells us, “I have been versed in the reasonings of men; but Fate is stronger than anything I have known.” To the ancients, fate was always a thing of mystery, unknowable to mortals, but perhaps alterable by our actions. Faced with a bleak future of austerity and debt payments, Syriza represents the will of the Greek people to take fate into their own hands.