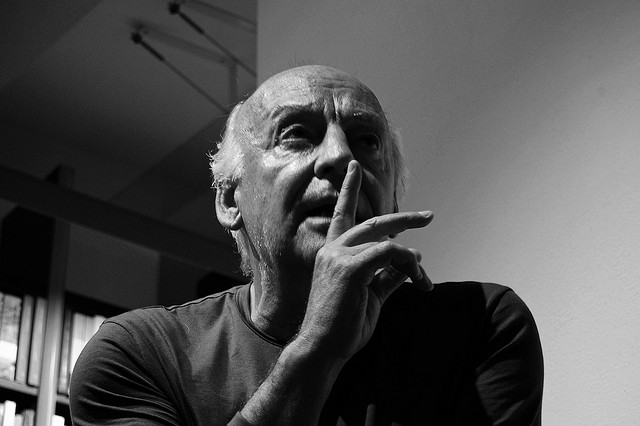 Memories of an Afternoon with the Late Eduardo Galeano

Remembering an interview between a “poetically tone-deaf leftist” and the giant of the Latin American Left.

“My guest on this week’s program is Eduardo Galeano, author of the classic Open Veins of Latin America: Five Centuries of the Pillage of a Continent…” He stopped me in my tracks and asked me to start the interview over. He explained that he hated the subtitle and wanted me to leave it out. I didn’t dare tell Galeano that I loved that subtitle.

My heart has been heavy since learning over the weekend of the death of the radical and marvelously lyrical Uruguayan writer Eduardo Galeano, whom I had the enormous pleasure of meeting some 20 years ago.

Galeano was an iconic literary and intellectual figure of the Latin American Left, but his work has a global footprint. Arguably among the most influential books of the second half of the 20th century, his landmark 1971 Open Veins of Latin America has been translated into more than a dozen languages and sold over a million copies. It stands with Fanon’s Wretched of the Earth, Albert Memmi’s The Colonizer and the Colonized, and Gillo Pontecorvo’s film The Battle of Algiers, as part of the pantheon of anti-colonialism and Third Worldism. Hamid Dabashi calls Galeano a “creative voice of an alternative historiography, a mode of subaltern thinking and writing before a number of Bengali historians made the term globally popular.”

Open Veins of Latin America was banned under the murderous military dictatorships in Chile, Argentina and Uruguay alike, and Galeano himself was driven into exile under his country’s regime during the 1970s. In 2009 the book made international headlines—and saw a major surge in sales—when Venezuelan president Hugo Chávez personally presented Barack Obama with a copy.

But while Open Veins was Galeano’s best-known work, his magnum opus was a trilogy titled Memory of Fire. My friend Scott Sherman captures it beautifully:

Unquestionably Galeano’s masterwork, Memory of Fire is a kind of secret history of the Americas, told in hundreds of kaleidoscopic vignettes that resurrected the lives of campesinos and slaves, dictators and scoundrels, poets and visionaries. Memoirs, novels, bits of poetry, folklore, forgotten travel books, ecclesiastical histories, revisionist monographs, Amnesty Inrnational reports — all of these sources constituted the raw material of Galeano’s sprawling mosaic.

Indeed, Galeano “rivals such masters of the fable as Kafka,” the literary critic Michael Dirda once wrote.

Galeano’s Book of Embraces occupies a special place in my heart, in part because it was a gift from my then-girlfriend, Debbie Bookchin. Our mutual love of Galeano was bond-forming. “A Diego Rivera mural in words,” the literary critic John Leonard felicitously called it. I read it the way I read Adorno’s Minima Moralia (another book Debbie and I bonded over), sipping from its aphorisms here and there, drawn back in by its charms over years, decades now.

The Galeano book that has always meant the most to me as a physical object is Walking Words. Illustrated by the Brazilian woodcut artist José Francisco Borges, it is work of arresting, hypnotic visual beauty. One reviewer called it an “assemblage of tales, fables and parables [full of] intense lyricism, subversive humor and spellbinding storytelling.”

I feel deeply fortunate to have spent an afternoon with Galeano almost exactly two decades ago, in the summer of 1995. I hosted a radio show in Chicago at the time. When I found out that Galeano was coming to Chicago to do a literary reading, I scrambled to get an interview with him. I contacted his US publisher, W. W. Norton. They were not encouraging. It was too late, they informed me. Galeano’s itinerary was already full and in any case he was in Seattle and out of contact (this was before cell phones and e-mail). And besides, who was I? I hosted a show on a college radio station.

I refused to take no for an answer. I asked them which hotel he was staying at in Seattle. They somewhat reluctantly told me. I called and got the hotel’s fax number. I rushed over to a nearby printing and computer shop (I didn’t own my own computer) and composed a desperate but serious letter to Galeano requesting an interview. I poured my heart into the letter, expressing my profound admiration for his books. I also mentioned how much I liked an article he had just published in the magazine NACLA: Report on the Americas (a staple of the left-wing Latin Americanist diet) on the tyranny of cars (cleverly titled“Autocracy: An Invisible Dictatorship”). I faxed the letter to the hotel and called (more than once) to make sure that the front desk had received it and gotten it into Galeano’s hands.

The next day, my roommate, Benjamin Ortiz, called me at work and said, incredulously, “Yo, there’s a message for you on our answering machine from Eduardo Galeano!” Time stopped. It was one of the coolest moments in my life. Galeano would later tell me that it was the specificity of my letter that won him over: in particular the fact that I had read his NACLA article. He was impressed by this obsessive metabolism and by my stalking techniques, he told me. It was a refreshing departure, he said, from many of the media requests he got, for example, in New York — from journalists who had never even heard of publications like NACLA, let alone read them.

I met Galeano at the hotel he was staying at in downtown Chicago and we conducted the interview in his room. I was in such awe of his presence, and so captivated by his eyes, that I can barely remember what he said. It torments me to no end that no recording of that interview has survived. (If anyone reading this happened to be listening to WLUW when it was broadcast, and recorded it, and saved the recording, please contact me!) One of the great regrets of my career is that I never transcribed that interview and published it…

The one thing I vividly recall from the interview is that when I said, by way of introduction, “My guest on this week’s program is Eduardo Galeano, author of the classic Open Veins of Latin America: Five Centuries of the Pillage of a Continent…” he stopped me in my tracks and asked me to start the interview over (I was recording it for later broadcast). He explained that he hated the subtitle and wanted me to leave it out. It was only the English edition that carried that subtitle, he told me. The original Spanish edition had no subtitle, just Open Veins of Latin America. The book’s U.S. publisher, Monthly Review Press, was a Marxist operation that specialized in political nonfiction. It was they who added Five Centuries of the Pillage of a Continent as a subtitle, which Galeano, a prose stylist of the first order, found utterly leaden.

I didn’t dare tell Galeano that I loved that subtitle. I remember the first time I held the book in my hands and took in those words on its cover. Open Veins of Latin America: Five Centuries of the Pillage of a Continent. Veins. Pillage. Centuries. A cascade of images, ideas, sensations. I knew I had to read the book and that doing so would turn my world upside down.

But I was a poetically tone-deaf leftist. Galeano was an artist. I of course obliged and started the interview over.

It’s because of that experience that I wasn’t as shocked as some were when it was reported last year that Galeano had disavowed that book, or at least distanced himself from it. “I wouldn’t be capable of reading this book again,” he remarked at a book fair in Brazil. “I’d keel over. For me, this prose of the traditional left is extremely leaden, and my physique can’t tolerate it.”

But this recoil was more than just stylistic. He went on to say in Brazil:

Reality has changed a lot, and I have changed a lot. … Reality is much more complex precisely because the human condition is diverse. Some political sectors close to me thought such diversity was a heresy. Even today, there are some survivors of this type who think that all diversity is a threat. Fortunately, it is not.

As far as I know, Galeano never wrote an essay or gave a full-blown interview elaborating on the this line of thinking. I interpret his comments not as an abandonment of leftism as such but as an affirmation of pluralism. In a brilliant talk at a recent conference at Columbia University, the Tunisia scholar Monica Marks distinguished between the politics of “purists” and “pluralists.” I read Galeano’s comments in Brazil as an expression of disdain for the former and sympathy for the latter.

Walking Words. Memory of Fire. What fitting images Galeano conjured with these titles. His words will continue to walk, to wander the earth, to inhabit our thinking, and to ignite our imaginations. Thank you, Eduardo, for the memory of your marvelous fire.​

Danny Postel is Associate Director of the Center for Middle East Studies at the University of Denver and co-hosts its series of video interviews with leading scholars. He is the author of Reading "Legitimation Crisis" in Tehran  and co-editor of The People Reloaded: The Green Movement and the Struggle for Iran's Future and The Syria Dilemma, which was named one of the best books of 2013 in The Progressive. He is a co-editor of PULSE and blogs for Truthout, Critical Inquiry and the Huffington Post. He was a member of Chicago's No War on Iran coalition, communications coordinator for Interfaith Worker Justice, and communications specialist for Stand Up! Chicago, a coalition of labor unions and grassroots community organizations.