Iranian Dissidents Explain Why They Support the Nuclear Deal

We know what politicians from the U.S. to Israel think about the Iran nuclear deal. How about asking some opponents of Iran’s regime?

The debate on the nuclear deal with Iran has revolved mainly around the geopolitics of the agreement. Is it good for the United States? Does the deal represent a defeat or a victory for the Islamic Republic? Does it make Israel more secure, or less? How will the Saudis respond? Will they pursue a nuclear program of their own? What will Washington do to placate its nervous allies in Riyadh (and other Gulf capitals) and Tel Aviv? What broader implications might the nuclear deal portend for US-Iranian relations, and for the regional politics of the Middle East?

These are hugely important questions, to be sure. But what does the nuclear agreement mean for internal Iranian politics? There’s been some excellent reporting on Iranian foreign minister Javad Zarif’s diplomatic craftsmanship, which has inspired comparisons—arguably exalted — to Mohammad Mosaddeq, and speculation about whether Hassan Rouhani can parlay the nuclear deal into a domestic agenda, pursuing the kinds of reforms that the Iranians who voted for him in 2013 desperately crave and eagerly await.

But how does this historic development look from the perspective of Iran’s grassroots? We saw the jubilation in Iran’s streets, the euphoric popular reaction to the news of the deal. But these scenes lacked context. What do Iranian dissidents and civil society activists actually think of the nuclear deal? An in-depth report issued by the International Campaign for Human Rights in Iran provides a refreshingly vivid sense of what such Iranians have to say, in their own words.

The report, High Hopes, Tempered Expectations: Views from Iran on the Nuclear Negotiations, features interviews with an array of Iranians — former political prisoners, filmmakers, political scientists, civil rights lawyers, playwrights, journalists, actors, economists, novelists, publishers, theater directors (some of them belonging to two or more of these categories, former political prisoner being the most common). In other words, these are not big fans of the Iranian government. Indeed, for personal security reasons some agreed to participate in the report only on condition of anonymity.

And the International Campaign for Human Rights in Iran itself is anything but enthusiastic about the Islamic Republic: the vast majority of its reports, videos and activity document the régime’s brutal repression and condemn its systematic rights violations in unflinching terms.

This report thus provides a vital perspective, one that’s been largely absent in the global debate about the nuclear deal — and in some cases misrepresented (for example, by neoconservative pundits who claim the deal is a gift to the régime and sells the Iranian opposition short). This report reveals what the régime’s critics, opponents, and victims, inside the country, actually think about this critical issue.

Take a Breath and Demand our Rights

“All of the individuals interviewed felt sanctions and Iran’s international isolation have profoundly hurt Iranian society,” the report’s authors note, ​“negatively affecting all spheres of economic, political, and cultural life, with especially dire consequences for the lower socioeconomic strata.”

“We hope an agreement is reached and that it is signed, so that our nation can take a breath after all this prolonged pressure.”
—Shahla Lahiji (Publisher, Roshangaran and Women Studies Publishers)

“Problems caused by the sanctions are palpable in every home right now.”
—Ahmad Shirzad (university professor and former member of Parliament)

“[M]any of our patients have problems obtaining their medication and medications are expensive. … [M]any of our passenger airplanes have … no repair facilities … and we can’t [get] spare parts.”
—Abbas Ghaffari (film director)

“[An agreement] will have its first impact on society’s collective mental state. While many predict this might be short-lived … the psychological impact of this victory in the different sectors of the society will definitely not be short-lived. Such a positive impact can even move people to take action to improve their conditions.”
—a journalist in Tehran and former political prisoner (anonymous)

“If we reach an agreement, good opportunities in every area will definitely develop, and we can demand our rights as human beings.”
—Mahmoud Dolatabadi (author)

“[Failed negotiations] would cause terrible damage to the people and to social, cultural, political, and economic activities. The highest cost imposed by the sanctions is paid by the people, particularly the low-income and vulnerable groups.”
—Fakhrossadat Mohtashamipour (civil society activist and wife of a political prisoner)

“[Failure to reach a deal will result in] an intensification of anti-West political tendencies in Iran [which] will help the overall anti-Western currents in the region, even if indirectly.”
—a civil rights lawyer in Tehran (anonymous)

“Social hopelessness would increase drastically [if the agreement fell through]. People would once again lose their motivation for reforms. … The failure of the negotiations would equal the failure of moderates and the strengthening of the radical camp. … The atmosphere for cultural activities and journalism would become tremendously more difficult. … [A] continuation of sanctions would place the country in a defensive mode … [and] the domestic security organs would increasingly pressure the media and journalists in order to silence any voices of dissent.”
—a journalist in Tehran and former political prisoner (anonymous)

This last comment echoes the sentiments of Akbar Ganji, one of Iran’s leading democratic dissidents who almost died on a hunger strike behind bars. ​“As a former Iranian political prisoner who spent six years in the Islamic Republic’s jails and whose writings have been banned in Iran, I support the [nuclear] agreement,” he has written. Reaching a nuclear deal, he argued, would ​“gradually remove the warlike and securitized environment from Iran.” The Iranian political scientist Sadegh Zibakalam recently made a similar point. 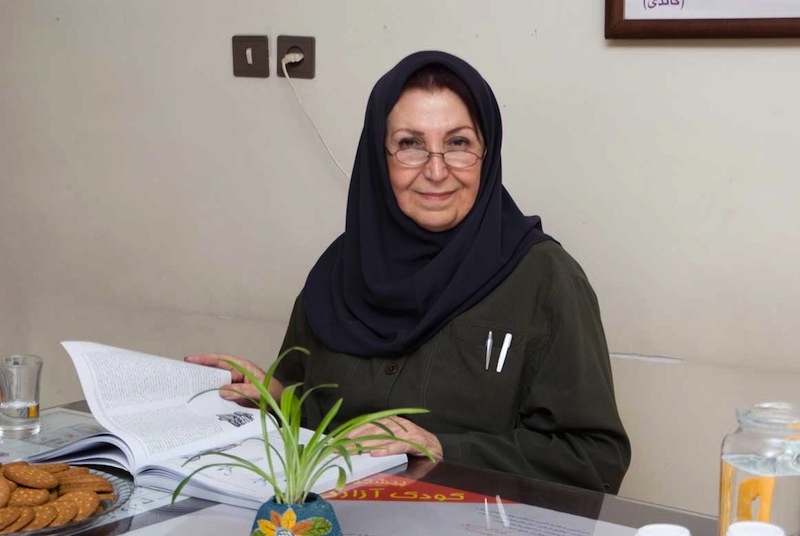 “We hope an agreement is reached and that it is signed, so that our nation can take a breath after all this prolonged pressure” said tranlator and publisher Shahla Lahiji. (International Campaign for Human Rights in Iran)

61 percent of the respondents believe that reaching a deal on the nuclear issue ​“should facilitate progress toward greater rights and liberties” and that ​“the nation’s attention, previously monopolized by the negotiations, could now turn to critical domestic issues, among them, the state of basic freedoms in Iran,” according to the International Campaign for Human Rights in Iran.

That is, on the real issues in Iran. Or, to use an old-fashioned phrase, removing the nuclear issue — and the concomitant economic sanctions and threats of external military action — could ​“heighten the contradictions” within the Islamic Republic. To wit:

“There are a lot of things that have all been on a waiting list in the hope that first the nuclear issue would be settled.”
—Ahmad Shirzad (physics professor and former member of Parliament)

“After the topic of nuclear negotiations dims, [Rouhani] will have to focus on human rights and civil rights, which were parts of [his] initial programs. … Cultural and political issues must be addressed side by side with economic issues.”
—Issa Saharkhiz (journalist and former political prisoner)

“Following the nuclear and economic issues, the Rouhani administration will have to tackle the issue of political freedom. Political parties, universities, and the media will be serious demands Mr. Rouhani will have to face, and he will have to take visible steps and present them to public opinion. … [Priorities must include] the serious pursuit of citizenship rights.”
—a journalist in Iran (anonymous)

‘Necessary Even if Not Sufficient’

The respondents interviewed for the report harbor no illusion that the nuclear agreement is a panacea that will magically end the régime’s human rights violations or produce democratic pluralism in Iran overnight. But they do believe, as the report’s authors note, that a resolution to the nuclear issue is ​“a necessary even if not sufficient requirement for any progress toward greater rights and liberties.”

“As a defense lawyer for individuals who are pursued or imprisoned for political reasons, my work will be positively impacted … and society will enjoy more freedom as a result. … Unlike those who believe that a decrease in foreign pressure would increase pressure inside the country, I don’t believe this.”
—Mohammad Saleh Nikbakht (lawyer)

“If the sanctions are lifted … another impact … I believe would [be] a big opening in the human rights discourse. … the human rights issue, God willing, will find more flexibility after this agreement … if the nuclear issue is resolved, [many other] issues will be influenced.”
—Massoud Shafiee (lawyer)

“Whether lame or legitimate, I hope that after a nuclear agreement there are no more excuses … and that it would be possible to expect, to demand things.”
—Hamid Amjad (playwright, theater director, and publisher in Tehran)

The report’s respondents voiced an array of perspectives on the likelihood of these demands actually materializing — some expressed deep skepticism, given the structure of power in the Islamic Republic, while others were more hopeful. Yet “[s]trong support for the nuclear negotiations and hope for an agreement was unanimous and unequivocal among all of the respondents, and was held regardless of the respondent’s expectations regarding the actual benefits of an accord,” the report’s authors note.

“It is incumbent upon the international community,” the report’s authors conclude, ​“to reinforce these voices of reason, patience, and hope, by similarly supporting the peaceful resolution of conflict with the Islamic Republic — and by doing everything it can in a post-deal environment to stand by the people of Iran in their efforts to achieve the most basic rights and freedoms.”

Indeed it is. Thanks to the International Campaign for Human Rights in Iran, we have a much clearer sense of what some of these voices sound like.

Danny Postel is Associate Director of the Center for Middle East Studies at the University of Denver and co-hosts its series of video interviews with leading scholars. He is the author of Reading ​“Legitimation Crisis” in Tehran and co-editor of The People Reloaded: The Green Movement and the Struggle for Iran’s Future and The Syria Dilemma, which was named one of the best books of 2013 in The Progressive. He is a co-editor of PULSE and blogs for Truthout, Critical Inquiry and the Huffington Post. He was a member of Chicago’s No War on Iran coalition, communications coordinator for Interfaith Worker Justice, and communications specialist for Stand Up! Chicago, a coalition of labor unions and grassroots community organizations.
Have thoughts or reactions to this or any other piece that you'd like to share? Send us a note with the Letter to the Editor form.
More articles by Danny Postel
Feature
Memories of an Afternoon with the Late Eduardo Galeano
Remembering an interview between a "poetically tone-deaf leftist" and the giant of the Latin American Left.
Feature
It Wasn’t About Oil, and It Wasn’t About the Free Market: Why We Invaded Iraq
Muhammad Idrees Ahmad's new book not only interrogates the motivations behind the 2003 invasion of Iraq, but also reveals a cautionary tale for the present.
Dispatch
Should We Oppose the Intervention Against ISIS?
Most U.S. leftists say yes. But voices we rarely hear—Kurds and members of the Syrian opposition—have more ambiguous views.
Similar articles
Feature
Welcome To The Next Incarnation of the Bernie Sanders Campaign
Our Revolution has big ambitions, but is still figuring out its role within the movement.
Kate Aronoff and Ethan Corey
Feature
Why Trump Puts the Utah Senate Race in Play for Progressives. Yes, Utah.
Misty K. Snow believes a storm is gathering that will shatter the status quo.
Theo Anderson
Feature
Many Pro-Bernie Groups Don’t Want Trump But Still Don’t Trust Clinton. Here’s Their Plan.
Sanders may have endorsed Clinton, but the groups supporting him are plotting a fight for progressive policies far beyond the 2016 election
Ethan Corey
Join our newsletter
Fearless journalism, emailed straight to you.
Subscribe and Save 66%