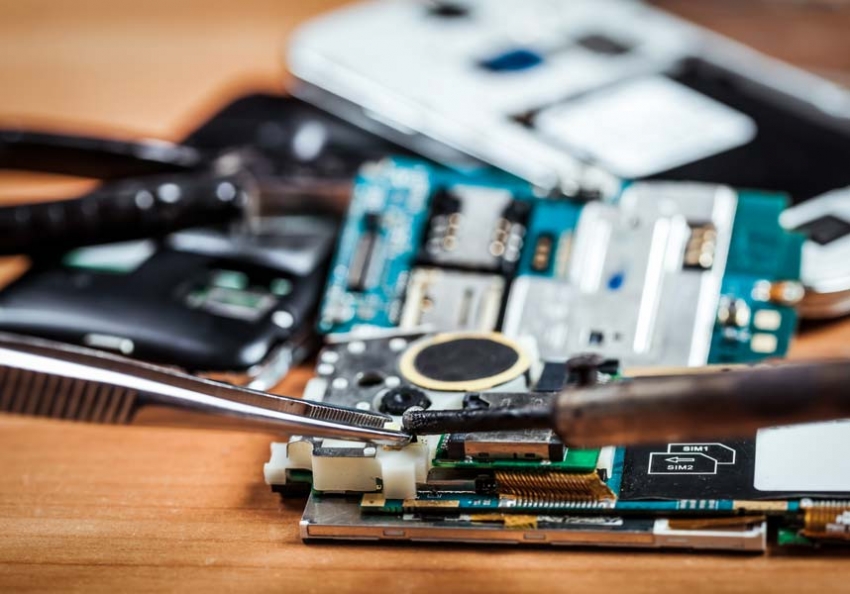 The cure for planned Apple-escence

“It’s not just Apple,” says Gordon-Byrne. “Any manufacturer that doesn’t want to provide parts and tools can instantly, without any difficulty, refuse to repair equipment and say that your only choice is to buy a new product.”

Twenty-five years ago, my family’s television, a sturdy mass of wood and tubes, went on the fritz. The curved glass screen had taken to displaying everything from the Smurfs to Peter Jennings in shades of green. Shipping the massive box to the manufacturer was out of the question. Instead, a call to a local, independent repairperson was placed. For a fraction of the cost of replacement, he restored our set to its Technicolor glory.

Just 20 years later, when an errant elbow cracked my family’s three-year-old flat-screen, no repair calls were made. What was the point? Replacing it would be cheaper, so that TV joined the 41.8 million tons of e-waste discarded around the world in 2014— much of it toxic.

A generation ago, the idea of tossing out a broken television would have seemed wasteful, or just plain stupid. Conventional wisdom suggests that rapid advances in technology—your average smartphone, after all, has more computing power than NASA used for the original Apollo missions—combined with the declining costs of offshore labor, means the culture of repair is losing the free-market battle against cheap replacement costs. Right?

Wrong, says Gay Gordon-Byrne, executive director of the Digital Right to Repair Coalition. The coalition of tinkerers, used-equipment sellers, e-waste reduction groups and concerned individuals came together in 2013 to serve as the public voice on issues of the digital aftermarket: what we’re allowed— and increasingly not allowed—to do with our products.

“The lack of repairability is deliberate on the part of manufacturers,” says Gordon-Byrne. It takes proper construction to create devices that can be repaired, as well as basic support to allow those repairs to happen. Many items are unfixable by design, like Apple’s 2015 Retina Macbook, which uses proprietary screws, and solders and glues components in place. But many items could be repaired, with the right parts and knowledge. The local repairperson of my childhood was aided by manufacturers’ providing manuals and selling parts. Those are two things that, for the most part, no longer happen.

“Their business model now,” says Gordon-Byrne, “is: You ship the TV back to them. They fix it, but they charge you whatever they want. They don’t allow Mr. Bob’s TV repair to buy the parts, the tools, or to get the manuals.”

Companies often simply urge customers to purchase a new device. “I heard this story recently,” says Gordon-Byrne. “A teenager’s headphone jack on his iPhone didn’t work, so he took it to the Apple Store for repair. The store told him that his phone was off warranty and, regardless, they don’t repair headphone jacks.” Instead, he was given the option to trade in for a new phone at a hefty cost of $275. In this case he was lucky: The headphone jack is a common component across smartphones and can be purchased in bulk for as little as 10 cents. A tinkerer was able to fix the supposedly irreparable phone for $25. In 2014, however, new manufacturer guidelines released by Apple prompted rumors that the company may phase out this standard connector for its own proprietary “lightning” port. (Apple did not respond to a request for comment.)

“It’s not just Apple,” says Gordon-Byrne. “Any manufacturer that doesn’t want to provide parts and tools can instantly, without any difficulty, refuse to repair equipment and say that your only choice is to buy a new product.”

That doesn’t mean repair is impossible—just difficult. For parts, one must typically turn to Asian suppliers that skirt intellectual property laws and often lack quality control. For information, one must depend on individuals who dissect devices on YouTube and websites like iFixit, a crowdsourced part of the Right to Repair Coalition that provides instruction manuals and ranks products by ease of repair.

Increasingly, companies create barriers in the form of proprietary black box software. Gordon-Byrne tells the story of a woman with a broken refrigerator who was able to identify which part had broken, procure the digital part, and successfully replace it—despite a lack of official documentation—only to be stymied by the need for a reset code. The only way to get the code? Paying for a technician to come out and enter it. Gordon-Byrne calls such practices “abusive.”

The tractor company John Deere has said that owning its products is little more than a license to use them. It argues that any modification of their software—say, to fix a broken harvester in a rural place where a technician may not arrive for days, but crops can spoil in hours—would violate copyright law.

Such policies mean that the next generation of engineers won’t be able to tinker as children without risking a lawsuit. Imagine if the Wright Brothers had been prevented from reengineering the bike.

In addition, the net result of such restrictions is higher repair costs, fewer jobs and more toxic waste. As of 2011, Americans were generating 3.4 million tons of electronic waste annually, 75 percent of which wound up in incinerators, according to the EPA. Electronic waste is a toxic stew of more than 1,000 materials. A typical tube television includes up to 8 pounds of lead, according to the Electronics TakeBack Coalition. Newer flat screens have less lead, but more mercury. These chemicals contaminate soil and drinking water. If burned, they foul the air.

Recycling is not the answer, either. We ship about 40 percent of electronics earmarked for recycling to countries like China, India, Ghana and Nigeria. Because so many electronics are not designed to be repaired, taking apart these products is hazardous. It frequently involves burning them or using corrosive acids to melt away the plastic and extract the gold, silver, copper and other precious metals that, combined with low wages, make electronics recycling profitable. In Xiejia, China, with more than 3,000 registered recycling businesses, the money comes at a cost: Lead levels in children’s bloodstreams have been high enough to cause irreversible brain damage.

In New York and Minnesota, the coalition has gotten legislation introduced—though not yet passed—that would require manufacturers to provide service information, security updates and replacement parts. It’s based on a Massachusetts auto repair bill, passed in 2012, that requires auto companies to standardize their diagnostic codes and repair data by 2018. The bills in New York and Minnesota, however, are more expansive, encompassing anything that contains a microchip, from medical equipment to tractors to cellphones.

“We’re losing jobs in the state of New York because these large corporations are mandating repair work be done by their own companies,” says Republican state Sen. Phil Boyle, who introduced the bill in New York. “The more vertical integration there is, the less free market there is. The small repair shop down the street needs to stay in business.”

Warren and Sanders Say We Need a “Right To Repair” Tractors. Here’s Why That’s Important.