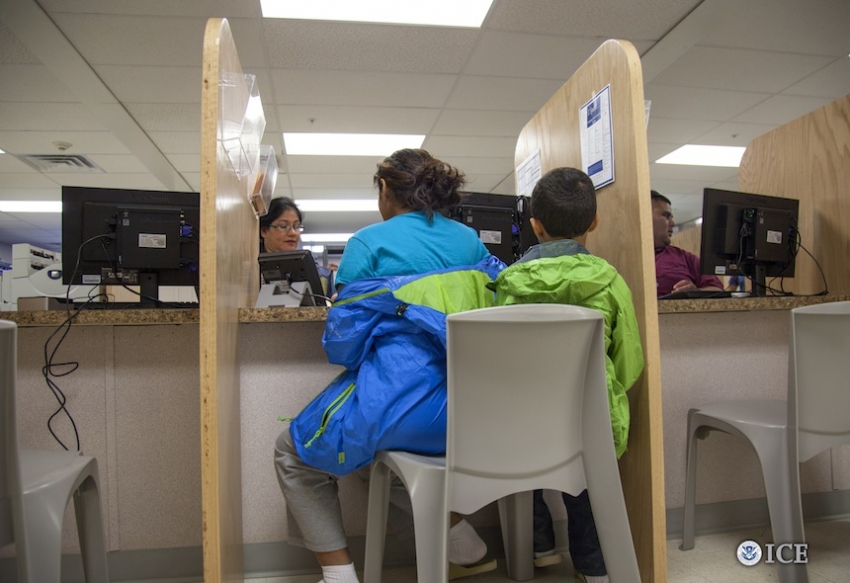 A mother and son participate in the intake process at the South Texas Family Residential Center in Dilley, Texas. (Charles Reed / DVIDS)

When Detained Immigrant Children Got Adult Dose of Hep A Vaccine, Mothers Objected, To No Avail

250 children at the Dilley, Texas, detention center were improperly vaccinated, even when mothers showed proof of prior vaccinations

'I asked what the papers said but they would not tell me,' Lorenzano says. 'But I signed them.'

In late June and early July, Central American children detained at the “Family Residential Center” in Dilley, Texas were injected with as many as six vaccines. In many cases, mothers at the center say, their children were vaccinated over their objections, sometimes even after proof of prior vaccination had been shown.

In addition, about 250 children were mistakenly injected with an adult dose of Hepatitis A vaccine, which is about twice a child’s dose. Immigration and Customs Enforcement (ICE) has said it is investigating the incident and “no significant adverse reactions” to the adult dosage had been observed.

The Dilley detention center opened late last year in response to the large number of Central American women and children crossing into the United States. It, and other family detention centers, came under fire almost immediately. Attorneys and advocates argue that, according to a 1997 judicial ruling known as Flores, children may not be held in detention. A federal court sided with advocates last week, and the Department of Homeland Security must respond by August 6.

According to affidavits, as well as interviews with several women and attorneys who are part of the CARA Pro Bono legal project at the center, women were awakened by guards, some as early as 4:00 a.m., over the course of a week beginning in late June. They were told to bring their children to the chapel for a medical appointment, where some then waited as long as four hours.

Susana Santiago says she waited an hour before her 13-year-old daughter was vaccinated, and during that time received no information or request for consent. Her daughter had already been vaccinated, she says, but, “I never had an opportunity to say anything,” and, worse, “I have no idea what was injected.”

“I was told it was for chickenpox,” says Briana Armandoza, a 27-year-old refugee from El Salvador with a 2-year-old son. She says she informed officials that her son had already been vaccinated and was told that didn’t matter; he had to be vaccinated. When she expressed fear about a second dose, “They told me, ‘Do not worry.’ ”

Some mothers say they were given papers with information in Spanish on the vaccines their children were going to receive. Sonia Lorenzano says she was given papers to sign in English, a language she neither speaks nor reads. “I asked what the papers said but they would not tell me,” she says. “But I signed them.”

Even when the papers were in Spanish, women still weren’t always sure what they were signing. “The woman I met with [said] she was told to sign a document,” says Aseem Mehta, an Immigrant Justice Corps fellow working with the CARA Pro Bono Project. “The officials would not speak to them or answer their questions… I do not know if they had time to read the document but … their questions were not being answered. It is also important to note that there are varying degrees of literacy among the women and many women who do not even speak Spanish.”

The papers listed five of the vaccines given to the children, including Hepatitis B, but, according to Mehta, omitted Hepatitis A, which the children also received. “On some of the papers we’ve seen,” he says, “a check-off box for Hepatitis A vaccine was written in by hand.”

Within a short time—in some cases, hours, and in others, days—at least ten of the children became severely ill, says Mehta. “My son was sick for a week,” says Armandoza. “He had a fever and was vomiting. He could not walk for two days.” Armandoza was told by ICE officials that her son had received the adult dose of Hepatitis A vaccine. Other mothers reported the same symptoms.

In These Times cannot confirm whether the children’s symptoms were due to the vaccines, and Dr. Deborah Wexler (among others), executive director of the Immunization Action Coalition, has written that an adult dosage of the Hepatitis A vaccine is “unlikely” to cause “untoward side effects.” According to the CDC, fever and soreness are common side effects from some of the vaccines the children were given, including the Hepatitis B, HiB, DTaP and PCV13 vaccines. Vomiting is more rare but can still occur.

The CDC’s website does not link vomiting and fever specifically to the Hepatitis A vaccine. “Getting hepatitis A vaccine,” writes the CDC, “is much safer than getting the disease,” a sentiment they repeat about DTaP and other vaccines.

According to the US Department of Health and Human Services, Hepatitis A vaccine is given as two injections, six months apart and Hepatitis B vaccine is usually given as three to four injections over a six-month period. According to Richard Rocha, Communications Advisor at ICE, the women would be responsible for seeing that their children received the full vaccination. “The families are able to take vaccination records when they leave … [and] receive the appropriate follow-up immunizations as necessary.”

Mohammad Abdollahi, Advocacy Director at RAICES, an organization providing legal assistance to detainees, doesn’t see this as a viable option. Follow-up is “not reasonable since women are not being explained their rights,” he wrote in an email. “We all thought one vaccine [injection] was enough, we didn’t even know you needed follow-up and it is doubtful the women will either. No one is telling them anything.”

It’s difficult to know how many mothers believe their children had side effects from the vaccinations, says Mehta. In part, this is because women and children are being released from the detention centers and advocates have lost contact with them. Another reason is fear.

“Many women are not talking because they are afraid they will be deported,” says Santiago. “Many have similar stories, but they will not talk.”

All names of the detainees have been changed at their request.