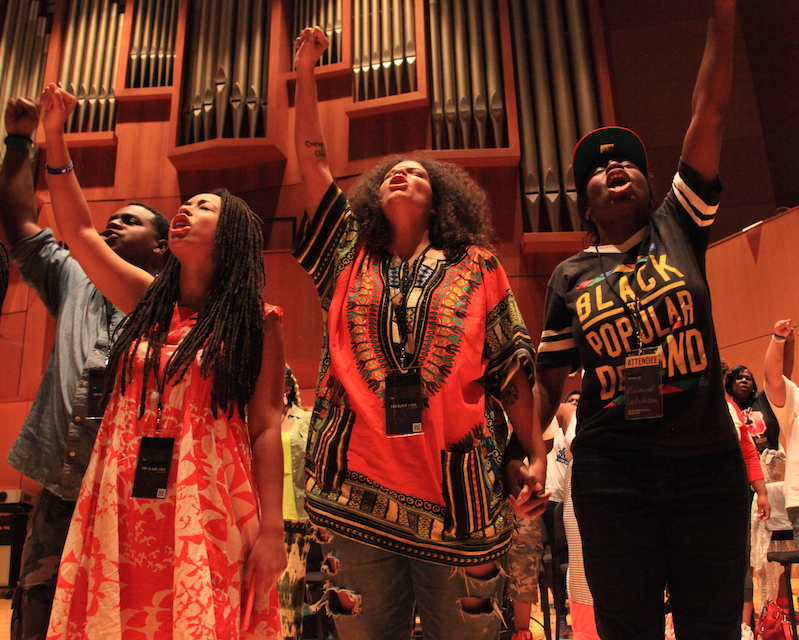 A Year Post-Ferguson, the Nation’s Youngest and Boldest Movement Debates Reform vs. Revolution

A firsthand report from Cleveland at the first-ever Movement for Black Lives national strategy session.

Elzie is 25. A quarter of a century of experience with the history of this country and she’s ready to completely overhaul the system. It’s a pretty common stance among millennial activists.

In the first conference of its kind—and the first conference of any kind for me, a 19-year-old journalism student—hundreds of activists converged at Cleveland State University from July 24 to 26 for the inaugural Movement for Black Lives Convening (M4BL). The gathering of “freedom fighters” aimed to continue the conversation about police brutality and other issues facing the black community in America.

On the last day, attendees witnessed a 14-year-old black boy being arrested for intoxication. What happened next is disputed, as most altercations between black people and the police are. I was not on the scene, but I believe the activists’ account: Unarmed activists were pepper-sprayed, including a 12-year-old girl.

The clash itself, between nearly 2,000 black activists and one of the most unjustifiably violent police forces in the country, was almost inevitable. What was extraordinary was that the protesters persevered through the pepper-spray—in a city in which Tamir Rice was killed to prevent a teenager from entering a police station—and the teenager was released into the custody of his mother instead of taken to jail, in what activist Cherrell Brown called a “community de-arrest.”

If anything can sum up the overall vibe of the M4BL, including the spirit that carried protesters through the de-arrest, it’s the two unofficial anthems of the conference: Kendrick Lamar’s “Alright,”, released in 2015 on the rapper’s critically acclaimed To Pimp a Butterfly and Assata Shakur’s chant from her 1973 open letter, “To My People”,

“It is our duty to fight for our freedom.

It is our duty to win.

We have nothing to lose but our chains.”

Played or chanted at the opening and closing ceremonies, the end of sessions and the altercation with the police, both the song and the chant are messages of black love and resistance. Written more than 40 years apart, they emphasize the sometimes uneasy coexistence between the current generation of activists and those who came before them. The question that seemed to be on all minds was how to incorporate the victories of past movements for racial justice—but not their mistakes.

In attendance were DeRay Mckesson, named by the Los Angeles Times as one of the “new civil rights leaders” of the 21st century; Miss Major Griffin-Gracy, a trans woman activist and community leader who participated in the Stonewall riots of 1969; children young as 5; Black Panther political prisoners who had served as many as 44 years in jail; millennial-headed organizations like the Dream Defenders and the Black Youth Project; and the family members of Rekia Boyd, Emmett Till, Michael Brown and dozens of other black people murdered by police or vigilantes.

When I saw the age makeup of the conference I expected there to be tension, eye-rolling on the part of younger activists and contempt from the older generation. It was nowhere to be found. Lamont Lilly of Worker’s World described the intergenerational moment as “humbling.” He says, “Here I was …sitting at the feet of giants, a new generation taking notes from the old field generals.” There seemed to be an understanding that a new movement could not operate in a vacuum, without the support and knowledge of a generation that’s already been tested.

It had the feeling of a giant family reunion—a lot of love and a lot of history. Ever-present were the unfinished legacy of the Civil Rights Movement, the sabotaged end of the Black Panthers and the current moment of Black Lives Matter—a yet-to-be-defined, movement attempting to combine the best of Malcolm X and Martin Luther King, Jr.

Session topics ranged from AIDS activism to combating transphobia to workshops on self-care to black workers in the labor movement, but running beneath the surface of every conversation was the question of whether to reform and engage in existing institutions or just dismantle the entire system. It is a question that was never definitively answered in past racial justice movements and formed a divide between everyone from Malcolm X and Martin Luther King, Jr. to differing segments of the Black Panther Party.

“I think I was slightly leaning towards reform on August 9, 2014 [the day Michael Brown was shot],” said Netta Elzie in a session on mapping police violence. Elzie is a St. Louis resident who, along with DeRay Mckesson, has been documenting the movement since the death of Brown (both were profiled in May by the New York Times Magazine). “Knowing what I know [now],” she says, “I just had to imagine a world where the police don’t even exist. Why fix a system that was never for us?”

Elzie is 25. A quarter of a century of experience with the history of this country and she’s ready to completely overhaul the system. It’s a pretty common stance among millennial activists. Search through the Twitter feeds of any young black activist and you are likely to find an element of revolution. For the youngest people in the movement, the ones raised in a world where the term “post-racial society” was starting to become acceptable, where Martin Luther King, Jr. has his own holiday, and hey, there’s even a black president—for these twenty-somethings to be convinced that the whole system is rotten, for them to have given up any hope of lasting reform without a complete dismantling of existing structures, is disheartening to say the least. It speaks of a movement completely severed from the ones that came before it, a movement that won’t be stopped at voting rights laws or affirmative action.

The history of racist policing in America backs up Elzie’s point that the system “was never for us.” As The Atlantic’s Ta-Nehisi Coates writes in his new book, Between the World and Me—an angry, blistering critique that acknowledges the hopelessness of achieving racial justice while still demanding we struggle for it—“In America, it is traditional to destroy the black body.”

Police were never meant to protect and serve black people. Quite the reverse: The first formal policing units in the South were slave patrols. Following the Civil War, these vigilante groups evolved into modern police departments primarily as a way to control freed slaves and enforce Jim Crow. It’s easy to conclude that if the root of the tree is rotten, one should cut it down and start over. But where to start that process when it’s not one tree but a jungle?

Many at the conference espoused a “both/and” approach. “You need people that are going to reform the systems and you need people who are going to try to shut those systems down at the same time,” said Samuel Sinyangwe, a data scientist and program coordinator at PolicyLink. He helped Mckesson and Elzie to create the first comprehensive database of police shootings in the United States.

And while Sinyangwe’s specialty is policy reform, he and other activists acknowledge there are limits to the viability of either reform or revolution, without addressing the root of it all: the racism deeply embedded in Americans.  “There’s a part, though, that goes beyond policy reform, it comes down to people and their thoughts about black people.”

That’s where it gets messy. How do we continue to try to prove our humanity to those who don’t believe it exists? There are two strains of thought. One of them, embodied by black celebrities from Don Lemon to Charles Barkley, is what’s known as “respectability politics.” Used to shout down activists who aren’t marching in three-piece suits or aren’t heteronormative or just don’t fit neatly into the sanitized legacy of MLK, respectability politics seek to validate black people’s humanity by fitting them into a “respectable” mold—one defined by white, middle-class norms. Vehemently rejected by Black Lives Matter activists, this model ignores systemic issues that especially affect low-income black people, like the prison industrial complex, housing discrimination and cyclical poverty.

The other strain of thought is that our lives have to first and foremost to matter to ourselves. It is the message implicit in Kendrick Lamar’s “Alright” and Assata’s chant. It is the message behind #carefreeblackgirls, the hashtag-based movement to celebrate and take joy in black women not in spite of their skin color, but because of it. This radical self-love was expressed time and time again throughout the conference, in the de-arrest and in the simple hugs and countless queries of “hey sis, you okay?” I received over the weekend.

“As difficult as it may be to face the reality that for centuries, constitutions and politics have suggested that a black life matters substantially less than a white one, we owe it to ourselves to breathe love into the language we use with and amongst each other,” said Florence Adibu at a Breathe-In, Teach-In I attended earlier this year at Northwestern University. The program was similar to the M4BL conference, a night that grappled with “the policing of Blackness” through speakers and panels. Adibu's words could have been the unofficial creed of M4BL: “The act of anointing the words we use with the love that has sustained us in the midst of anti-black violence, to me is a revolutionary act.”

Rachelle Hampton is a Summer 2015 editorial intern at In These Times. She's a sophomore studying journalism at Northwestern University and is involved with the black student life magazine, Pulse, and the Northwestern alumni magazine.