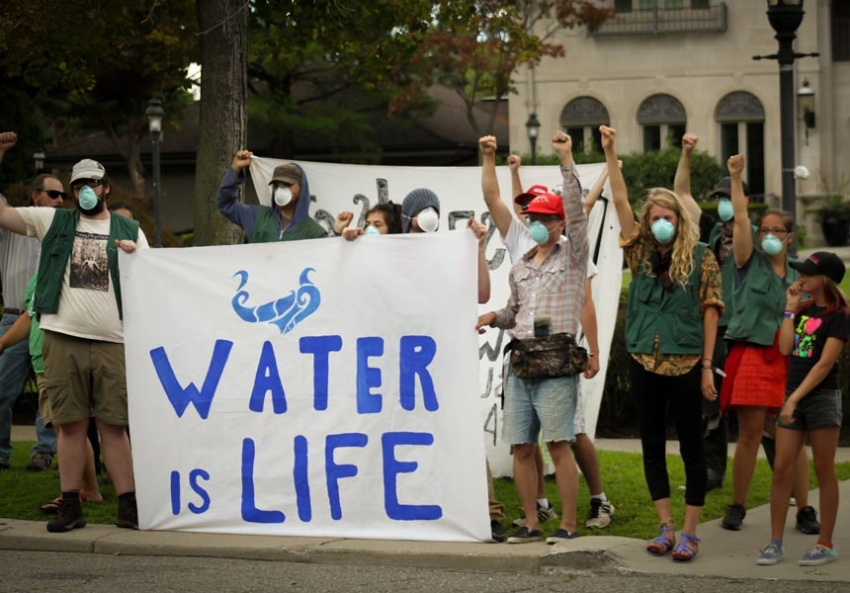 The City of Detroit Withheld Water From 40,000 People–So Activists Tapped the Mayor’s Mansion

'[City officials] are selling this narrative that Detroiters are sitting in their homes with big screen TVs and refusing to pay their water bills. This is just not true. ... These people are living in complete poverty.'

On the morning of August 3, volunteers from the Michigan and Detroit Coalitions Against Tar Sands (MICATS/DCATS) gathered at Detroit’s Manoogian Mansion, wearing shirts that read “Water Is Life” and carrying large, empty jugs.

The 4,000-square-foot residence on the Detroit River is the home of Mayor Mike Duggan. The volunteers were there with a simple goal: Force the mayor to share his water with the some 40,000 Detroit residents whose water has been shut off in the past year because they can’t pay their bills.

Because the mansion is city-owned, they reasoned, Detroiters lacking access to water in their own homes should be able to share in its resources. So activists attached hoses to the water taps on the side of the mansion and began to fill up their jugs, taking about 12 gallons in what they hoped would be a wake-up call to the city.

“Denying tens of thousands of people the right to water ought to be criminal; doing it while living in a city-owned mansion is just despicable,” said organizer Valerie Jean Blakely.

Detroit’s water wars are connected to the larger fight over controversial reforms implemented in the wake of the city’s 2013 bankruptcy. In addition to slashing pensions and privatizing several key municipal services, the city’s bankruptcy plan handed control of the Detroit Water and Sewerage Department (DWSD) to a new regional authority run by unelected officials. As part of this reorganization, DWSD has intensified efforts to collect debts, announcing in March 2014 that it would shut off water services to 1,500 to 3,000 customers each week if their bills remained unpaid.

Corruption, bad investments and a shrinking customer base have contributed to DWSD’s growing deficit, which stands at $22 million, according to officials. The department has repeatedly raised rates in an attempt to pay off its debts, hitting residents with an 8.7 percent rate increase for water and sewage in June 2014, followed one year later by a 7.5 percent rate hike. Prior to these hikes, the average monthly water bill in Detroit for a family of four was already nearly double the national average.

Environmental organizers say that while Detroit’s citizens suffer through a manmade drought, public resources are flowing freely to corporations. Detroit businesses such as the Chrysler Group collectively owe more than $20 million in back payments to the water department, but their taps have not been turned off. And Detroit’s Marathon Refinery received $175 million in tax breaks from the city for an expansion of its operations, including the water-intensive process of refining Canadian tar sands oil.

MICATS and DCATS are among dozens of other groups that have sprung up to protest the wave of water shutoffs threatening Detroit’s most vulnerable residents.

DeMeeko Williams, co-founder of the Detroit Water Brigade (DWB), a nonprofit dedicated to providing water access, says the shutoffs are having another devastating effect: They’re exacerbating the city’s foreclosure crisis. Many residents have racked up thousands of dollars in back payments they must meet in order to get their water turned back on. Some take that money out of their rent or mortgage payments. That, in turn, makes them vulnerable to losing their homes to foreclosure, or if they can’t afford upkeep, to condemnation.

So volunteers are taking matters into their own hands. “We couldn’t let the city go without water,” says Williams. The DWB has helped thousands of residents access water through a number of innovative schemes. In addition to the relief stations, it has solicited water donations for those in need, distributed barrels to collect rainwater, and helped create a water affordability fund, which covers 10 percent of residents’ past-due bills using private donations.

Blakely narrowly escaped having her own water turned off. During a tough winter, her family fell more than $1,000 behind on utility bills. At 7 a.m. on July 14, 2014, a truck operated by Homrich—a private contractor that has been paid as much as $6 million by the city to conduct water shutoffs—drove through her neighborhood and turned off water access in most of the area’s homes. Fortunately, Blakely was awake, and stood on the water access point on her lawn until the truck driver gave up and continued on.

That morning, Blakely got friends and volunteers together to provide water, food and sanitation kits to people in need. After the first week of providing these goods to her neighbors, Blakely says, she felt empowered. After the second week, she felt despair. “Even if you gave someone two gallons of water, they would be making serious life decisions with what to do with the water,” Blakely says. “They have to decide if they want to cook, bathe their kids or wash their hands.”

Blakely and other activists see their work as a stopgap measure until the city begins taking care of its poor. She’s scornful of rhetoric from Mayor Duggan such as, “When some Detroit residents don’t pay their bills, those bills have to be paid by other Detroiters.”

She adds that city officials “are selling this narrative that Detroiters are sitting in their homes with big screen TVs and refusing to pay their water bills. This is just not true,” she says. “I can tell you that these people are living in complete poverty.”

The shutoffs have drawn a rebuke from the United Nations, which says that they are a violation of the basic human right: access to clean drinking water.

In October 2014, Leilani Farha, UN Special Rapporteur on the right to adequate housing, made a statement urging Detroit’s elected officials to take action: “Every effort should be made by all levels of government to ensure that the most vulnerable are not evicted from or lose their housing as a result of water shutoffs or water bill arrears.”

Thus far, the city hasn’t budged. Though it has thrice implemented brief moratoriums and taken measures such as increasing staffing at the DWSD call center, improving customer notifications of impending shutoffs and creating payment plans intended to help customers stay current on the bills, activists say these amount to little more than a Band-Aid. City Council President Brenda Jones did not respond to In These Times’s request for comment.

So MICATS and DCATS are using direct action to raise a ruckus.

Blakely says of tapping the mayor’s mansion, “It really was a liberation. It might not have been a lot of water but it was in your face. We made a statement.”