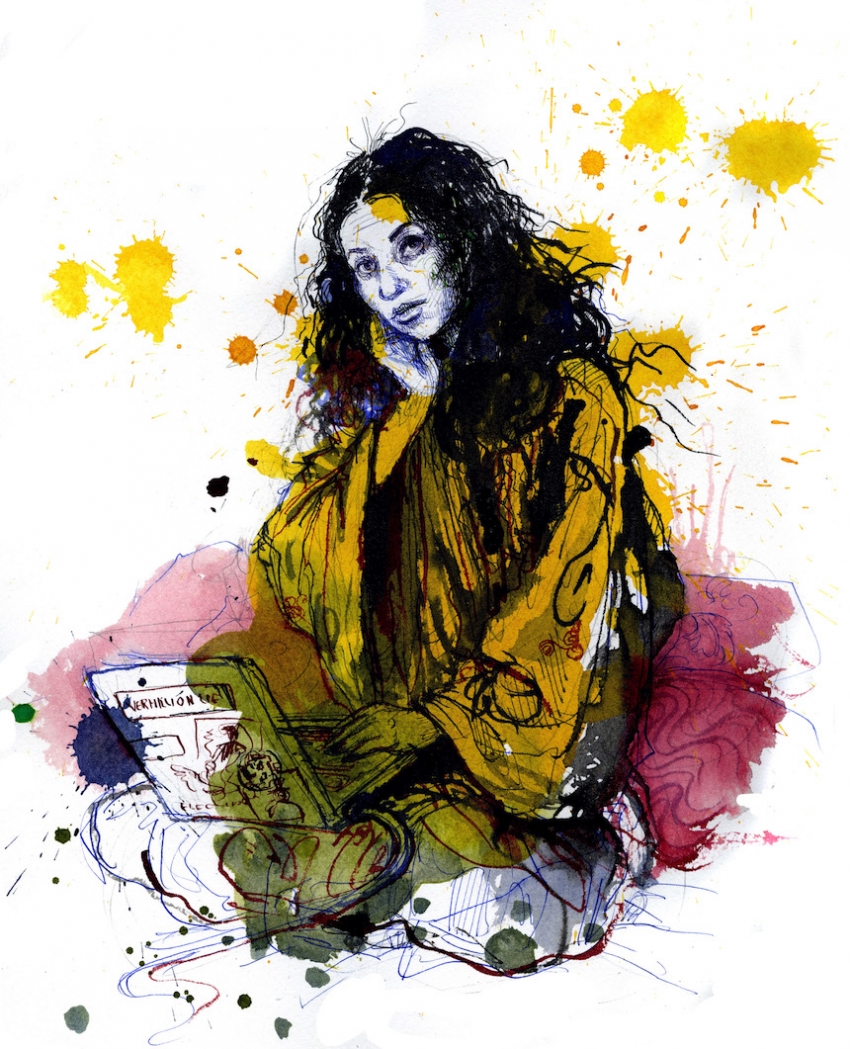 Molly Crabapple's art is often intense, lurid and playful-looking, yet her illustrations encompass all–as if Pynchon were a graphic novelist. (Self-portrait by Molly Crabapple)

Molly Crabapple tells In These Times about her new memoir—and true to form, the interview is no-bullshit in tone and global in scope.

I might look at the Thomas Friedmans and the Nicholas Kristofs of the world and think, 'My god, I might not be a genius, but I’m better than them.'

Molly Crabapple has gone from “Occupy’s greatest artist” to a powerhouse journalist. In her art, writing and animations, which have appeared everywhere from Vanity Fair to the Paris Review to her column for VICE, she shines light into the darkest corners of injustice: immigrant detention centers and solitary confinement units, Abu Dhabi’s labor camps and Guantánamo’s Camp X-Ray. She has drawn life under ISIS and Greece in crisis. She personally confronted Donald Trump before it was cool.

In her new illustrated memoir, Drawing Blood, she recounts her personal, artistic and political coming-of-age. At 18, she started working as what she calls a “professional naked girl” to fund her art. Nude modeling and burlesque dancing introduced her to New York’s underworld, where artists and sex workers rubbed shoulders with—and waged “class war” against—the rich who were often their patrons.

Then Occupy politicized her art. She drafted protest posters, hosted activists and reporters at her apartment near Zuccotti Park, and got arrested at the Occupy anniversary. Since then, she has taken her anti-establishment ethic all over the world, adding written reporting to her repertoire and commanding mainstream attention.

Crabapple spoke with In These Times about her memoir, art and politics.

In the book, you come across both as someone who’s Zelig-like, everywhere with everyone at all times, and an outsider, working in the underground economy and trying to break into the art world. Was there a moment when you stopped feeling like an outsider? If so, did any sense of loss come with that?

When you’re an outsider, you don’t have loyalties to anyone, so you can be cruelly honest if need be. The more you get inside, the more you are involved in polite networks of professional coercion that make people less honest.

When you live in New York and are an artist and are interested in people, you meet a lot of people. A lot of these people I met before they were well-known. Then later, people like Laura Poitras break the Edward Snowden story, and they were getting drunk in your apartment the previous year.

Isn’t this always the tragedy of bohemia? Either you come inside and become a well-fed, boring person with tenure, or else you stay outside and die of syphilis. Capitalism co-opts things in that way. But obviously, I’m not a broke kid with cockroaches in my hair anymore. And thank God for that.

Are there ever times when your allegiances to outsiders might interfere with your ability to be honest?

Recently, Lena Dunham signed a really fucked-up petition against Amnesty International when they voted to support the decriminalization of sex work.  A lot of important people signed it, but Dunham’s signature was particularly important because she’s an influential young feminist.

Around that time, her people asked me to work for her new feminist newsletter. I said “no” and wrote an open letter about it. I felt like: Okay, I have this access, I’m respectable enough that they asked me to illustrate for this—maybe I can persuade her to listen to sex workers and not sign a frankly dangerous petition. Unfortunately, it didn’t work out. Lena stuck to her position, despite the many people in the industry pointing her towards work that supported Amnesty’s decision. I wish she had listened to sex workers.

You write frankly about your abortion. Your experience wasn’t wonderful. Did you worry it might be used as fodder for abortion opponents?

No one has a fun experience with surgeries—any surgery. You could go to someone and be like, “Are you happy you had a root canal? Do you love it?” No one loves their fucking root canal. Abortion is a medical procedure, and medical procedures are shitty. They’re not fun.

I wrote about my abortion honestly, because if you write propaganda that everyone knows is lies, you do more harm to your cause than anything else.

You write in the book about working as a “professional naked girl.” There’s a moment where you and a friend are talking about what plastic surgery you would need to get to be “perfect.” Do you feel any ambivalence about how capitalizing on your looks might affect you personally?

But you do know that if you get breast implants, you can make $300 more a night. That’s just a capacity to earn money. If you’re going to view your looks as a way to get something, that’s much healthier, because it has nothing to do with being loved or your soul. It’s the same thing as saying, “If I got a master’s degree, I would earn more money.”

Occupy looms large in your story, but you don’t seem to reach a resolution about it. Did Occupy ultimately disappoint you?

I think Occupy succeeded in politicizing a generation of people. I don’t know if that’s just my hopefulness; perhaps when you’re involved in these things that fundamentally transform you, it’s hard to get an objective historical view. I know it changed me and my friends.

You say you’re more devoted to your sketchbook than to any social movement. Still, you seem very drawn to movements, from Occupy to Greek anti-austerity. Do you have some kind of vision for what social movements should be going forward?

No, I’m an artist. Artists suck. I look at people I admire like anti-prison activist Mariame Kaba and I’m like, “You do that and I will support you.” There are people way smarter than me who can organize shit. I will just draw the posters.

You write about how you can draw in places where you can’t photograph. Do you feel like there’s something fundamentally less objectifying about drawing people?

When you take a photo, people can’t really see what you’re doing. You have this electronic box and it’s all happening in the box. But if I have a sketch book and I’m drawing, someone could look over and say, “Your drawing looks like shit.” You’re demonstrating your own skills in a vulnerable way when you draw.

Objectifying is kind of a funny thing. Art is objectification, all art, because you’re taking someone and making them into an object. But people can also talk back more to you when you’re sketching them. They can look at you and say, “Oh man, you got me wrong.”

How does writing about something versus drawing change the way you relate to people?

When you write about someone, you’re objectifying them on a much more intimate level. When I’m drawing someone, I’m just drawing their surface. If I was drawing you, I’d be like, “Oh, that’s where her nostrils are and that’s where her eyes are, and her hair does this little curve.” Whereas when you’re writing about someone, you’re asking, “How does she laugh? What’s her relationship like with her roommate?” It’s all these other things that you’re taking away from them and making your own.

In several moments in the book, you write about acting more daring than you felt. But you’re doing things like covering huge stories like the anti-austerity movement in Spain without having much writing experience. How did you muster the confidence to do that?

Most people covering stories, doing most other things, are shitty. I wrote about my friend Jen Dziura in the book. She says what inspires her isn’t greatness but mediocrity, because she looks at the massive morass of idiots who feel so self-righteous. In keeping with her idea, I might look at the Thomas Friedmans and the Nicholas Kristofs of the world and think, “My god, I might not be a genius, but I’m better than them.”

You wrote about a hunger striking prisoner and drew Khalid Sheikh Mohammed in Guantánamo. Is it intimidating to just pick a topic like Guantánamo and entirely educate yourself?

Totally. Every single time I feel like I’m going to screw up and betray everyone. I felt the worst when I was writing about Israel’s military incursions in Gaza, because the stakes are so high for people. But yes, every single time, I’m afraid. Every time.