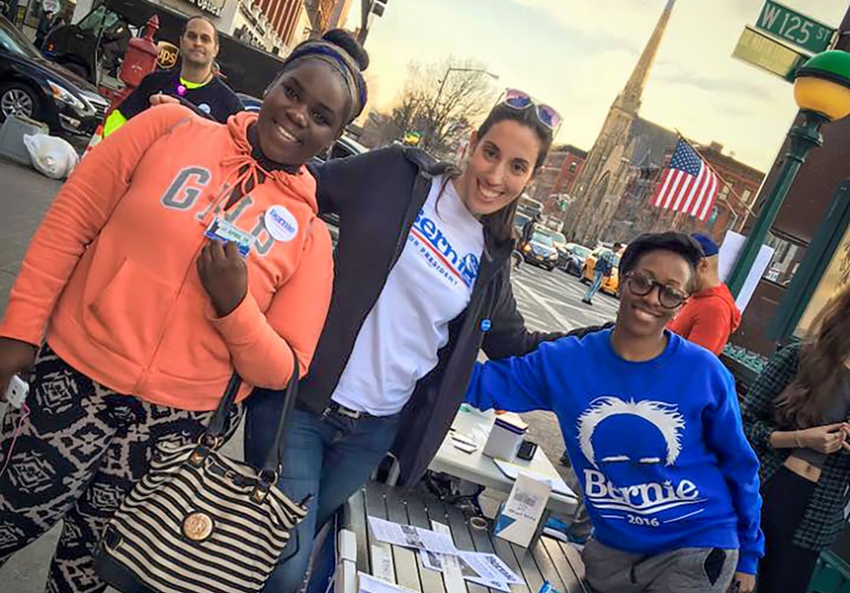 Harlemites are feeling the Bern and registering voters.

The Bernie Sanders Campaign Is Electrifying New York Politics. Will It Be Enough to Win the Primary?

Inspired by Sanders, independent groups like “Team Bernie NYC” and “Harlem for Bernie” have been hitting the streets to engage voters

While every candidate depends on volunteers, Sanders’ operation is unusual in the degree to which supporters are encouraged to organize independently.

Mariano Laboy, 71, had never volunteered for a presidential campaign before he decided to join Bernie Sanders’ “political revolution.” Sanders’ push for free higher education resonates deeply with the Puerto Rico native, who completed his bachelor’s degree in January after years of working to put his siblings through college ﬁrst. Laboy plans to start a master’s degree in community organizing in the fall. In the meantime, he has put his skills to work mobilizing low-income students and other new voters in hopes of giving Sanders a boost in tomorrow's critical New York primary.

From the get-go, Sanders has emphasized that his revolution depends on mobilizing “millions and millions” of Americans disaffected by the political process. So far, the results have been mixed. The number of registered Democrats has decreased or remained stagnant in many states and Democratic turnout overall in this year’s primaries has fallen relative to 2008 (a record year).

New York is an unlikely place to buck this trend. The state is one of 11 that holds closed primaries in which only registered party members can participate—a fact that many have cited as a weakness for Sanders, who often draws support from independent voters. Anyone wishing to switch their party affiliation had to do so by last October. The state does not offer early voting or same-day registration.

Still, Sanders supporters hoped to overcome these odds by staging registration drives at nearly all of the city's colleges and universities in addition to concerts, public housing sites, subway stations, churches and parks in advance of the state's March 25 deadline to register new voters. The grassroots organization Team Bernie NY signed up at least 10,500 such voters in New York City alone, according to Sean Patrick Murphy, a volunteer who helped coordinate the efforts.

With all eyes on New York, the organizers are holding their breath to see whether this work will pay off. Early signs were good: Governor Andrew Cuomo's office reported an “unprecedented surge” in first-time voters registering online in the days leading up to the March 25 deadline. However, overall voter growth was modest; as of April 1, the number of registered Democrats in New York increased by about 14,000 (out of about 6 million total statewide) since November 2015, according to official figures from the state Board of Elections. The board did not respond by deadline to a request for the total number of new voter registrations this figure represents.

While Sanders has narrowed Clinton's lead, he still trails her 43 - 53 in New York, according to a Sunday CBS News poll. For Sanders to have a shot, volunteers like Laboy will have to dramatically increase turnout among young and first-time voters.

In the Democratic contests so far, ﬁrst-time primary voters have chosen Sanders over Clinton by an average margin of about 20 percent, according to available CNN exit polling. The youth vote in particular has helped him pull oﬀ a series of upsets against Hillary Clinton in states such Michigan, where 85 percent of voters under 25 gave him their support in the March 8 primary.

“Sanders was able to win in Michigan because, proportionally, there were just as many young voters as there were older voters, which is unusual,” notes Andra Gillespie, associate professor of political science at Emory University. “Younger voters might be really enthusiastic for him, but it only matters if they go out and vote.” In New York’s 2008 Democratic primary, voters over 60 made up 30 percent of the electorate, while voters under 30 made up just 15 percent, even though the two groups are roughly equal in size in the state’s population. New York’s contest, which awards 291 delegates to the national convention, could prove decisive in the race for the nomination.

Yet Sanders has emphasized that his campaign is about more than winning elections. “I hope we accomplish that, but that isn’t the most important thing,” he told the Washington Post in July 2015. “The most important thing is building a political movement in which millions of people who have given up on the political process, including a lot of young people, get involved.” That month, Sanders announced what he called “the largest digital organizing event in the history of this country,” bringing together more than 82,000 volunteers at 3,000 house parties nationwide to learn organizing skills and meet other Sanders supporters in their area.

Part of what excites progressives about Sanders’ campaign is the possibility that it will build infrastructure that can be channeled into state and local races, as well as politics beyond the ballot box. While every candidate depends on volunteers, Sanders’ operation is unusual in the degree to which supporters are encouraged to organize independently. They coordinate via the “Organizing Hub” on Sanders’ website, a platform that allows supporters to host events independent from the ofﬁcial campaign.

While campaigns with greater resources may not put as much energy into independent volunteer infrastructure, “for Bernie Sanders, mobilizing the grassroots has been a matter of survival,” says Murphy, who trains other volunteers for Team Bernie NY. In New York City, the majority of the 175 pro-Bernie events listed on the campaign’s website at press time—including voter registration drives, phone banks, and discussion groups for undecided voters—have originated with volunteers themselves. (While Clinton’s website oﬀers a similar platform, at press time the campaign’s event page listed about 75 events in New York City ahead of the state primary, most of which were oﬃcially sponsored by the campaign.)

Murphy says these tools have provided the foundation for “a groundswell of grassroots support” that surpasses what he saw as an assistant campus campaign director for Obama in 2008. “It’s been a kind of ‘if you build it, they will come’ moment for us,” he says.

Since becoming involved over the summer, Murphy has held about a dozen trainings for Sanders volunteers, teaching them the basics of phone-banking, canvassing and voter registration. His trainees have then gone on to host their own events.

This model has made it easy for volunteers to plug in on their own time. “I couldn’t ﬁnd any events when I was available, so I just started making my own,” says Nicole Press, a freelance stage manager and teacher who has organized ﬁve voter registration drives in Harlem. “I’ve never been involved in an election before. I’ve always voted, but I’ve never truly been able to vote for somebody that I actually wanted to be in office. It was always the lesser of two evils. Bernie is different.”

In the course of this organizing, Press met so many other Harlem supporters of Sanders that she co-founded a volunteer group, Harlem for Bernie, that now has dozens of members. Laboy met his co-host for a community college voter registration drive, Rachel Bernstein, during an event hosted by the Bernie Light Brigade (a national group of activists unaffiliated with the campaign) in January. “We saw each other’s signs and started talking, and we’ve been running events ever since,” Bernstein says. “Sometimes people will join us right on the spot.”

Win or lose, Laboy thinks that helping new voters take part in the political process is its own kind of revolution. “We registered a woman, 80 years old, who said she had never been registered before in her life,” he says. “People are getting involved for the ﬁrst time. That is Bernie Sanders’ revolution.”

Editor's note: This article has been updated to clarify New York's respective registration deadlines for new voters and voters wishing to switch their party affiliation.