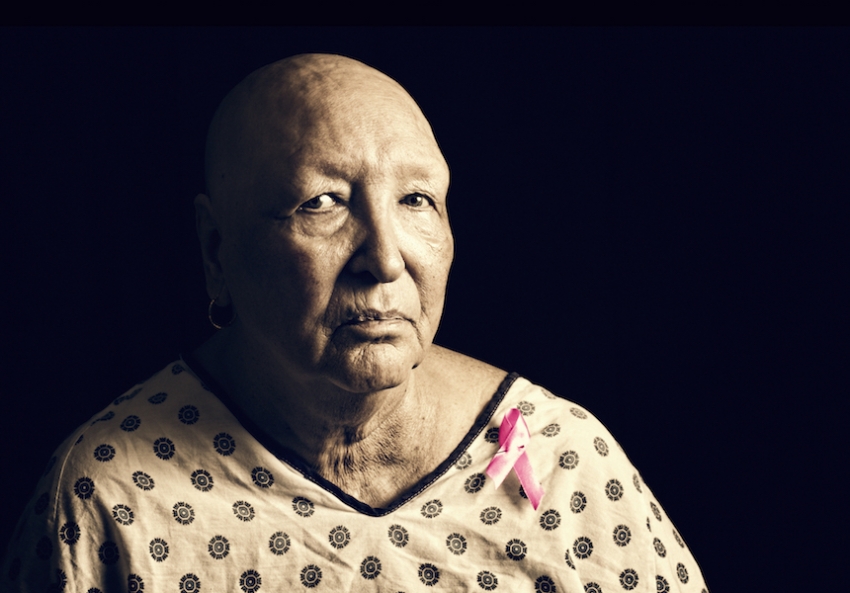 Marginalized people are more likely to get cancer and less likely to survive it. (Casey Hill Photo/Getty images)

The Problem With Cancer Memoirs

Popular accounts ignore the underlying race and class dynamics that determine vulnerability to the disease.

My frustration with Kalanithi’s memoir may lie with the genre itself. Memoir, by its nature, highlights the uniqueness of the writer’s experiences.

I have spent many hours in a cancer ward. It’s a spotless, fluorescent-lit expanse divided into “pods,” a space-age terminology that is reassuringly high-tech. Inside each pod are rows of people sitting in Barcaloungers next to metal IV frames dangling bags of fluids, like squishy Calder mobiles suspended above the patients’ shoulders.

I usually read a novel as the chemotherapy drugs are infused. Most people are absorbed by their phones. Some sleep, some stare straight ahead, some chat with the chemo-buddies that social workers say can cheer you through several hours of treatment. I have been in pods where one Barcalounger resident begins a conversation with another—usually the opening line is “how long was your drive,” and then “what do you got,” meaning which cancer— and then draws in the rest of the pod. There was the day two women, discussing their pancreatic cancer, lifted their shirts to show us their sternum-to-pelvis scars.

In the past few months, people in the cancer ward have been carrying Paul Kalanithi’s highly acclaimed and beautifully written memoir, When Breath Becomes Air, which was published posthumously in January and still sits atop best-seller lists. It has become a talisman for cancer sufferers and survivors. Kalanithi was a 36-year-old neurosurgeon training at Stanford when he was diagnosed with stage 4 lung cancer. He was the father of a toddler when he died in March 2015. Kalanithi had earned a master’s in English literature (with a thesis on Walt Whitman); it was literature that sustained him during his most wretched days. With patients, and later himself, Kalanithi shies away from prognosis—a two-month or five-year survival rate—noting that statistics say a lot about groups, but no one knows where an individual sits in a fog of numbers.

Indeed, my fellow sufferers like to say that cancer does not discriminate—its sufferers come in all shapes and sizes, races, classes and inclinations. Cancer, at its simplest, is a group of diseases characterized by the uncontrolled growth of abnormal cells. The problem is that the disease lives in society. Some groups are more likely to be exposed to carcinogens, some are more likely to be killed by cancer. According to the American Cancer Society, your chances of getting cancer are greater if you live in Kentucky, Pennsylvania, New York, New Jersey, Connecticut or New Hampshire. But you are more likely to die of cancer if you live in West Virginia, Kentucky, Tennessee, Alabama, Mississippi, Louisiana, Arkansas or Oklahoma—all in the top-ten poorest states by median household income. African Americans have the highest death rate and shortest survival rate from cancer. In 2012, black American men were 24 percent more likely than white men to die of cancer; the death rate for black women was 14 percent higher than for white women. Racial disparities for some cancers, particularly breast cancer, are increasing. According to the American Cancer Society, “Social and economic disparities more than biological differences” might explain the differing death rates. Cancer—like jobs, education, housing and the criminal justice system—does discriminate.

Even before his cancer diagnosis, Kalanithi was a young man in search of meaning. He chose a career in medicine to make a concrete contribution to humanity. He chose brain surgery because the brain is where science and the spiritual collide, where the ineffable stuff that makes each human an individual is formed. Life’s virtue, he writes, “had something to do with the depth of the relationships we form.” He lived his philosophy while practicing medicine. “Here we are together,” he tells his patients. “I promise to guide you, as best I can, to the other side.”

Kalanithi’s courage in facing death is remarkable. For someone afflicted with cancer, or anyone struggling with life, Kalanithi’s search and solution—the finding of life’s meaning in everyday relationships—is a soothing balm.

Yet, the memoir’s broad appeal lies in its ability to skirt a big chunk of cancer’s story. Kalanithi’s laser-like focus on each individual life leaves unexamined the sources of the American Cancer Society statistics. It is comforting to think of cancer as a bundle of misbehaving cells and of healthcare as an almost-friendship. But people, and healthcare systems, are social products; we do not spring into being, cancer-afflicted or not, in the purified air of a hospital room. Cancer has been linked to pesticides in food, tainted urban water systems and chemicals in workplaces, all undergirded by the structural forces of poverty and racism. Where and when you were born, your race, your nationality and your household income influence your predisposition to cancer.

My frustration with Kalanithi’s memoir may lie with the genre itself. Memoir, by its nature, highlights the uniqueness of the writer’s experiences. (Barbara Ehrenreich’s brilliant breast cancer memoir, which eviscerated the medical establishment and self-help culture, is an exception.) Individualism is a particular attraction of the cancer memoir. We cancer-afflicted like to believe our suffering is unique, that we sit somewhere just beyond the bell curve for prognosis, and at the same time, that we have entered an egalitarian pod, shooting for the stars.

But that is the kind of self-deception that allows us to ignore the environmental causes of cancer, the barriers posed by poverty and a costly healthcare system, and the simple fact that politics and society determine that some people are more likely to die of the illness than others.

Margaret Garb is the author of Freedom’s Ballot: African American Political Struggles in Chicago from Abolition to the Great Migration.. She is working on a history of poverty and work in the U.S. from the Civil War to the Reagan era.