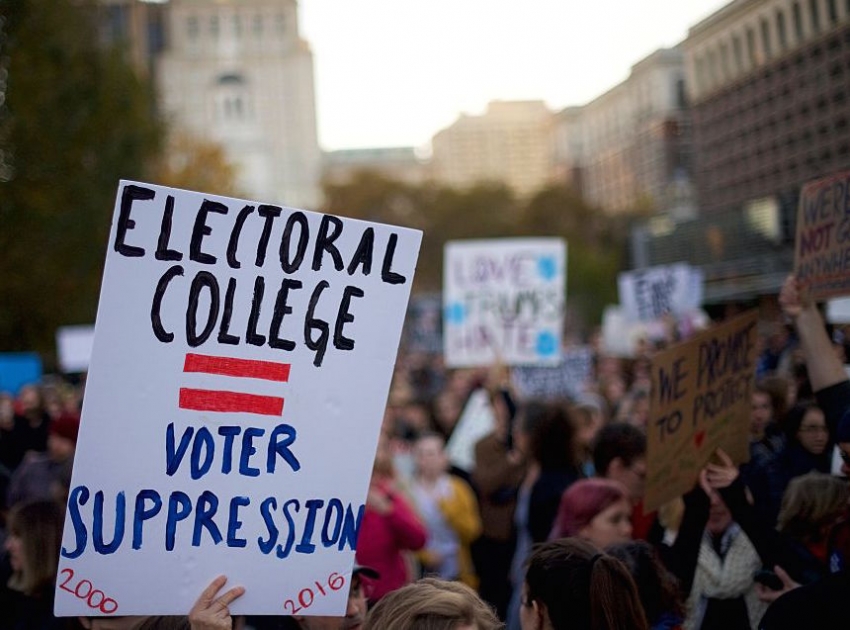 Protestors demonstrate against President-elect Donald Trump outside Independence Hall in Philadelphia, Pa, on Nov. 13, 2016, after the Republican candidate lost the popular vote by more than a million votes, but won the electoral college. (Photo by Mark Makela/Getty Images)

Tom Geoghegan: 4 Things We the People Can Do About Our Unjust Voting System and a President Trump

A case for a house divided.

Compulsory voting is an existential threat to the Electoral College. It will become too difficult to install a future Bush, or a Trump, who loses not just by one or two million but by 10 or more million votes.

Through the relic of the Electoral College, it is our shame to have elected, once again, the runner-up as president of the United States. By doing so, “We the People” have disgraced ourselves in front of the whole world. Consider all the forms of rigging in which the electorate is now entangled.

First, the election to the presidency is rigged. Hillary Clinton won the popular vote by at least 2.6 million ballots.

Second, the U.S. Senate is rigged—even worse than the Electoral College. Half a million or so people in Wyoming having the same representation as nearly 40 million people in California. Throw in more tiny red states like North and South Dakota, and that alone explains why the Senate is still controlled by the GOP.

Third, the House is rigged. Thanks to gerrymandering, the largely Republican state legislatures decide who goes to Congress. “We the people” have lost our say.

Finally, appointments to the Supreme Court are rigged. Since there are no term limits, we have had a right-of-center Court for almost 50 years. And that right-of-center Court has upheld voter ID laws and other ways to suppress the vote, which benefits Republicans, allowing the Court go on being right of center. Did I mention the 5-to-4 vote in Bush v. Gore?  Bush repaid that favor by naming two new justices to keep the Court rigged, 5 to 4.

So what is to be done?

The first thing—above all, and as futile as it may seem—is to do everything we can to delegitimatize the system. The Democratic Party, as a party, has to commit to this project.

Let’s start with the Electoral College. We should have a boycott. In the coming weeks, in the 20 states (plus D.C.) that Clinton won, the electors should refuse to send in their ballots for a ceremonial counting by the Senate and the House. Federal law—I refer to 3 U.S.C. 1 et seq.—requires that on the second Wednesday in December, the electors send in the ballots to be recorded before a joint session of Congress. Electors also send copies of their ballots to the secretary of state and federal judge in their home states (among others). If the electors fails to send the ballots to Congress, the president of the Senate and the speaker of the House can direct that the ballots be forwarded from the sets kept by the secretary of state or the federal judge. But this time, let the Clinton electors notify the Congress that they will not participate in this sham. They will not send any ballots. Then let the House speaker and the Senate president send their emissaries to the secretary of state or federal judge. When they receive and start counting them, as they must do, these ballots can be blanks.

The point is not to stop Trump from taking office, but to protest it, which is different from the appeal to Trump electors to be “faithless,” that is, to change their votes from Trump to Clinton. As Abraham Lincoln said of the Dred Scott case: The point is not to resist the literal result—to return Dred Scott back then or keep Trump out of office now—but to do all that we can to discredit a law that allows an unconscionable result.

And if states impose $1,000 statutory fines on the electors for this expressive act, notwithstanding the First Amendment, well, the law is the law: Send in the checks.

Second, at the same joint session, House and Senate Democrats should object to the counting of votes from states that sought to suppress the vote. Wisconsin, for example, has a voter ID law that serves no purpose except to hold down the popular vote. Members should move to deny the count from Wisconsin, Arizona, and any other pro-Trump state where the outcome was close and there was a voter ID law in place that, at least arguably, violated Section 2 of the Voting Rights Act.

Even better, members should “lay on petitions,” to use an archaic legal phrase, from people in these states to verify that there was an effort that might have kept some from the polls. The intent is to question the integrity of the votes cast in the Electoral College, and the model is the aftermath of the 1876 election. The dispute over one electoral vote led to the Compromise of 1877, in which the Republican, Rutherford Hayes, got the White House, while Democrats, who supported Samuel Tilden, got an end to Reconstruction. How wonderful if Democrats let Trump take the White House in return for Merrick Garland getting on the Supreme Court. This is unlikely: It is the kind of hardball that the Left, unlike the Right and alt-Right, never has the nerve to engage in. Still, the Democrats should use the joint session this December to put these states on trial for suppression of the vote.

3. Make the gap too big to ignore

Third, Democrats must institute compulsory voting in California and New York, in particular, and in as many of the other 15 states that Clinton carried as possible. Indeed, universal voting—which states have the authority to require—is the only tool that Democrats have to dismantle not just the Electoral College but the other ways that the GOP is now able to rig the vote.

One big state—California or New York—might be enough to set off a constitutional chain reaction. With compulsory voting in place in several states in the next presidential election, it is very likely that the Democrats would pile up a popular majority so immense that, under the weight of these new votes, the Electoral College, even as a half-credible institution, would simply collapse.

How big might the variation be? According to the latest figures from the Cook Political Report, Clinton leads Trump in the popular vote by a margin of more than 2.6 million, or 2 percent of the national vote. In California, voters preferred Clinton by a whopping margin of 30 percent. Let’s assume that split remained the same but all eligible voters in California cast ballots. That would adds another 3.2 million to her national margin over Trump, bringing it up to 5.8 million, or 4 percent of the popular vote. Then conduct the same calculation with New York. Then add in New Jersey, Illinois, Colorado and others.

Indeed, the lower overall turnout in this last election came in the Clinton states, where the outcome was assured. The focus on “battleground” states has a tendency—among Democrats especially—to hold down the votes in the “safe” states, as the safe GOP states can compensate for lower turnout among their voters by scaring off the Democrats.

Why would this growing disparity lead to an end to the Electoral College? It might not. But, to quote Lincoln again, it would create a house divided. With a right-of-center Supreme Court, the GOP will have license to go on scaring off minority race and low-income voters. The best way to fight this, since legal challenges will be less effective, is to do the opposite in Democratic states: rather than shrink the electorate, massively expand it.

Instead of trying to bridge the divide in our country, in other words, the Democrats should now widen it. Rather than trying to overcome our differences, we should accentuate them. Lincoln’s main point in the 1859 “house divided” speech was that the house could not stay divided. Only one version of America would survive.

With compulsory voting, the American “house” would be even more divided in the midterms, in which voter turnouts are now so low. In one half of the country, 95 percent or more of the electorate would vote, and in the other, the rate would continue on at 37 percent, or even lower. How long could the republic survive with such two different systems?

Some claim that compulsory voting would violate the First Amendment. But if that is true, then it would be unlawful to require jury duty. Yet we compel people serve on juries, and to render life-and-death verdicts.

Who are the non-voters? Overwhelmingly, they are young people, the poor and Hispanics. As the country becomes younger and more diverse, the GOP has every incentive to hold down the vote, while the Democrats have every reason to expand it, and to back the GOP into a corner.

Compulsory voting in some states—but not in others—is an existential threat to the Electoral College. It will become too difficult to install a future Bush, or a Trump, who loses not just by one or two million but by 10 or more million votes.

There is, finally, an even bolder way to commit to a “house divided.” To accentuate the divide, all or some of the Democratic states could enter an “interstate compact,” much as states now do for sharing of resources. This interstate compact, though, would be a quasi-constitution—a model for what the whole country should have. The Clinton states should elect delegates to do this compact-making. Aside from compulsory voting, here are just a few possible clauses that the states might agree to enforce against each other.

1.  A ban on partisan redistricting of U.S. House and state legislature positions.

3.  A commitment to carry out their share of what the U.S. committed to in the Paris global warming accords.

4.  A bill of rights for employees, including a right not to be terminated except for just cause.

5.  A formula for a just level of funding for public education.

6.  A comprehensive system of background checks for gun purchases.

Since each of the above is an act that the state itself would be free to take, an interstate compact would not infringe on federal sovereignty —or require approval of Congress under Article I, section 10.

Let one part of America, at least, be a city on a hill.  It is time to press for a country that operates under two different kinds of constitutions, and see which of them prevails.