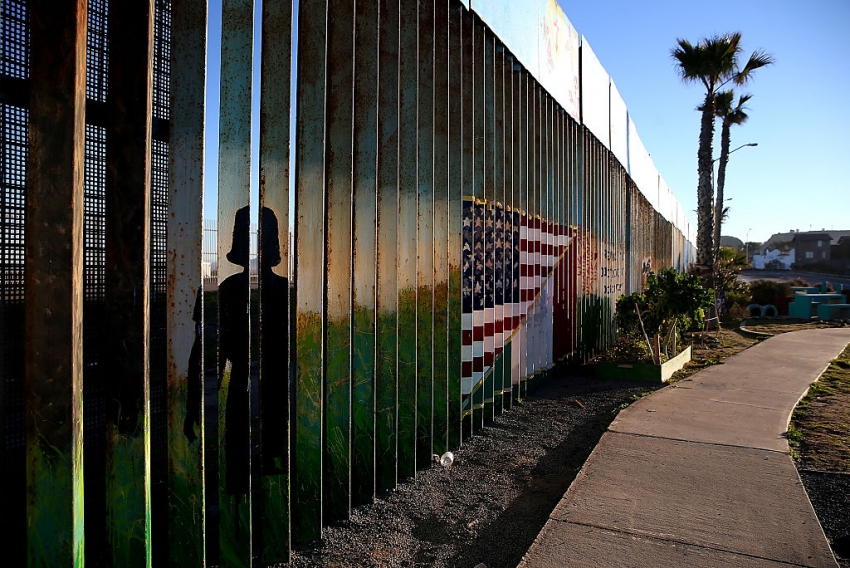 Though the executive orders are just a first step, GOP lawmakers have already signaled that they will authorize between $12 and $15 billion dollars for wall construction. Though concerted efforts of resistance could scare Trump and his administration into backpedaling, protection and advocacy networks are digging in for a protracted fight. (Photo by Justin Sullivan/Getty Images)

The president wasted no time to start targeting immigrants.

'People and the environment will pay the ultimate price.'

President Donald Trump took his first steps last week toward fulfilling his anti-immigrant campaign promises to build a border wall, deport undocumented immigrants and effectively terrorize immigrant communities. Even before the refugee ban order he signed, sparking confusion and protests across the country, he signed two executive orders Wednesday, which were widely condemned by critics decrying the potential deportation of millions of immigrants, the environmental destruction of borderlands and the disintegration of historic American values. In sum, Trump’s first week in office was a scourge on immigrants, refugees, asylum seekers and their communities.

Among the many controversial items in the Wednesday orders is a call for the further construction of immigrant detention facilities. New or expanded facilities would likely be built and managed by private prison companies contracted by the federal government, despite the fact that many private prisons and detention centers have been accused of heinous, and sometimes deadly, abuse.

The orders also pull funding from so-called sanctuary cities, which, according to the orders, cause “immeasurable harm to American people and to the very fabric of our Republic.” Yet, as a new study published by the Center for American Progress concludes: “Crime is statistically significantly lower in sanctuary counties compared to non-sanctuary counties. Moreover, economies are stronger in sanctuary counties.” Mayors in major cities across the country responded promptly, pledging to defy Trump’s immigration orders.

Another worrisome implication, according to Jeanne Atkinson, executive director of Catholic Legal Immigration Network (CLINIC), is “the massive expansion of deportation and detention practices.” Despite Trump’s hiring freeze of federal workers, his executive orders call for the hiring of 5,000 new Border Patrol agents and 10,000 new Immigration and Customs Enforcement (ICE) agents. Atkinson notes that there is nothing in the orders, however, about hiring new immigration judges, which, along with the orders’ directive to terminate the practice of catch-and-release—under which immigrants awaiting court hearings are released—could result in “migrants languishing for years in detention centers.”

“We know well,” Atkinson said, “how dehumanizing detention is, how re-traumatizing it is.”

The orders also authorize state and local enforcement officials to do the work of immigration officers. Critics have long argued that such a setup undermines trust between communities and police and leads to less safe cities, with some residents hesitant to report crimes for fear of interacting with police. John Sandweg, a former ICE director, told Politico that Trump’s order to deputize police as immigration officers is “going to sweep up a lot of families, a lot of folks who have children, a lot of folks who have been here a long time.”

But it is the orders’ directive about the wall that has garnered the most attention and criticism (until it was superseded by outrage over the refugee and Muslim-focused ban). The orders, which prompted Mexican President Enrique Peña Nieto to cancel a planned trip to the White House, direct Secretary of Homeland Security John Kelly to “immediately plan, design, and construct a physical wall along the southern border.”

The language of Trump’s presidency, as evoked by his executive orders, is much in line with the bluster and venom of his campaign, except now there are actual—and devastating—consequences. The preamble to one of the orders states “Illegal immigration presents a clear and present danger to the interests of the United States.” “Clear and present danger” is a legal term used by the Supreme Court to determine when it is permissible to limit free speech, and is not used to describe a kinetic threat (especially when there is none) or a rise in immigration.

The Sierra Club was among the many organizations to oppose Trump’s executive orders, stating: “Like a hotel with his name in gold above the door, Trump’s Mexican border wall would be an ugly monument to his ego. It will cost billions in U.S. taxpayer dollars, while causing flooding, and harm to border communities and wildlife.”

“[The] same walls that are funneling people to their deaths are the walls that are impacting wildlife and protected landscapes,” said Dan Millis, borderlands program coordinator with the Sierra Club’s Grand Canyon Chapter.

Though the executive orders are just a first step, GOP lawmakers have already signaled that they will authorize between $12 and $15 billion dollars for wall construction. Though concerted efforts of resistance could scare Trump and his administration into backpedaling, protection and advocacy networks are digging in for a protracted fight.

“People and the environment,” Millis said, “will pay the ultimate price.”