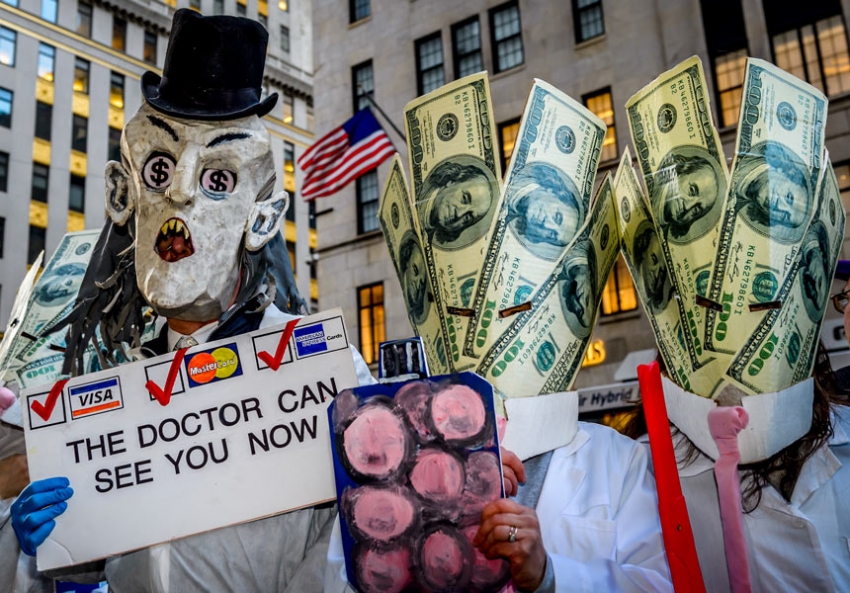 Healthcare advocates rally at Trump Tower in New York City on January 13 in support of Medicare for all. (Erik McGregor/Pacific Press/Lightrocket via Getty Images)

Where Trump voters and socialists agree.

“It’s not difficult to talk about healthcare with people from across the spectrum. People want to pit rural Trump voters against the educated, progressive people in the cities, and that’s not where the tension is."

In early April, a public radio program in the Rust Belt city of Rochester, N.Y., spent an hour discussing healthcare—but not, as you might expect, the GOP’s attempt to repeal and replace Obamacare. It focused instead on the brightening prospects for a single-payer healthcare system. The guests included a Trump voter and small-business owner, Tim Schiefen, and the co-chair of the Rochester chapter of the Democratic Socialists of America (DSA), Karen Vitale. What was remarkable was how little they disagreed.

Asked his opinion of single-payer, Schiefen responded that it was worth exploring. “The problem is putting the foxes in charge of the henhouse,” he said. “Why are we allowing these gross, overspending health insurance companies … to administer this stuff?”

Increasingly, the single-payer solution is generating that sort of consensus across ideological and party affiliations. In early April, an Economist/ YouGov poll showed that 60 percent of respondents supported a “Medicare for all” system, including 43 percent of people who identified as conservative and 40 percent of Trump voters.

The energy behind single payer is partly a result of the GOP’s success in pointing out the flaws in Obamacare, then failing to offer a workable alternative. Vitale believes that, in a paradoxical way, it’s also driven by Trump.

“I think Trump broke open a lot of things,” says Vitale, who grew up in a rural small town an hour south of Rochester. She says that the Trump voters she knows trusted his populist pitch— and “now they’re activated, and they’re acting from a place of self-interest. You can’t put them back in the box.” When Trump breaks campaign promises, she predicts, “They’re going to notice really quickly. They noticed with Trumpcare.”

That doesn’t mean they’re ready to abandon Trump. On the radio program, Schiefen said he appreciates Trump’s “moxie” and has no regrets. But he also said he would be willing to vote for Democrats with better ideas. “The whole system is built too much on us [versus] them,” he said. “Let’s put aside the differences. Let’s get to the root of the concern.”

Vitale and other members of the Rochester DSA are part of a coalition pushing for single-payer reform in New York State. In early April, they traveled to Albany to lobby state legislators. They also regularly canvass the city, educating people about single payer and urging them to call their representatives.

“It’s not difficult to talk about healthcare with people from across the spectrum,” Vitale says. “People want to pit rural Trump voters against the educated, progressive people in the cities, and that’s not where the tension is. The tension is with suburban Trump voters who are wealthy and doing very well in our current healthcare system, and have no interest in reform.”

The power of single payer as an organizing tool seems to hold true across the nation. As with many DSA chapters, the East Bay DSA has seen a spike in membership since the election, and much of the new energy is being channeled into the push for single payer. The chapter sends hundreds of volunteers each month to canvass on behalf of the Healthy California Act, which would create a state single-payer system.

“It’s strategic because it’s something that’s going to profoundly benefit the vast majority of people,” says Ari Marcantonio, East Bay DSA’s lead organizer for the campaign. “So this is an issue we can mobilize tens of millions around. But single mothers, people of color, poor people and immigrants will benefit the most. ”

Among some conservatives, the shift in thinking on healthcare is being driven by the idea that, as Schiefen said, the insurance companies are profiting at the expense of people’s health. That critique allows them to pin the problems on Obamacare while embracing the idea of universal healthcare.

Consider Christopher Ruddy, a Trump supporter and CEO of the influential conservative website Newsmax. In a recent editorial, he urged Trump to “reject the phony private health insurance market as the panacea” and lamented that Paul Ryan’s second plan “accepts key parts of the Obamacare law that benefit the insurance industry, but it ends the Medicaid expansion program that benefits the poor and keeps costs down.”

Ruddy didn’t embrace a full single-payer system. But he did argue that Trump should honor his campaign pledge to provide universal healthcare. It could be achieved, he wrote, by expanding the Medicaid system “to become the country’s blanket insurer for the uninsured.”

When a dramatic expansion of the Medicaid program is a prominent conservative’s solution to our healthcare crisis, we’ve entered uncharted waters.

As recently as last year, the push for a single-payer system seemed virtually dead among the Democratic establishment. Hillary Clinton ran on the promise of tweaking Obamacare. The liberal economist Paul Krugman wrote that Bernie Sanders’ “Medicare for all” proposal was “just not going to happen anytime soon.”

Now, the goal seems a lot closer. In January, Rep. John Conyers (D-Mich.) reintroduced a bill—originally put forth in 2003—that would create a publicly financed universal healthcare system funded largely by a payroll tax, tax hikes on the rich and a financial transactions tax. Conyers’ bill, The Expanded and Improved Medicare for All Act, has widespread backing from unions, medical organizations and progressive groups, and had 104 co-sponsors as of late April.

Bernie Sanders has promised to introduce a single-payer bill in the Senate, leading CNN to predict that “Democrats eyeing the 2020 presidential contest could soon face a ‘Medicare-for-all’ litmus test from the party’s progressive base.” At a rally in March, Sanders said, “Every major country on earth guarantees healthcare to all people … don’t tell me that in the United States of America, we cannot do that.”

This abrupt turnabout is partly a result of the Republican failure to replace Obamacare. The GOP’s flailing has energized and focused the resistance to Trumpism while undermining the party’s legitimacy on the issue. The videos and headlines from raucous town halls have been particularly devastating. A Pew Research poll released in mid-April found a 19-point gap regarding which party is trustworthy on healthcare, with 54 percent saying that Democrats would do a better job.

At the same time, progressive energy has expanded the horizon of possibilities. Groups devoted to pushing the Democratic Party in a progressive direction—like Justice Democrats, Brand New Congress and Progressive Change Campaign Committee (PCCC)—are making healthcare reform central to their work, and they’ve moved well beyond Obamacare. Brand New Congress, which recruits and supports progressive candidates for office, cites “making Medicare available to anyone who wants it” among its highest priorities. PCCC has collected more than 40,000 signatures on a petition that asserts, “All Democrats running for office in 2018 should publicly support and run on passing Medicare for All.” The goal is “to create a push for Democrats to go bold,” says Kaitlin Sweeney of PCCC.

These federal reform initiatives are working in synergy with state-level proposals. In Minnesota, state Sen. John Marty introduced legislation in January to create a single-payer system with universal coverage. More than 250,000 Minnesotans are currently uninsured.

“The Affordable Care Act was a half-baked solution,” says Marty, a member of the Democratic Farmer Labor Party. “I don’t want to minimize for a minute the difference it makes. It covered many millions more people. But … the system is dysfunctional, and it’s getting worse.”

Marty compares the healthcare fight with the struggle for marriage equality, in which state laws created a domino effect. In 2008, he introduced a marriage equality bill in the Minnesota Senate and said it could pass in five years—which it did, in 2013. “This is doable stuff,” he says. “Times are changing and [single payer] could happen.”

None of the state-level campaigns are a sure thing. The November election turned the Minnesota legislature considerably “redder,” meaning Marty’s bill has no chance in the near term. The Healthy California Act, introduced in February, appears to have broad support in the legislature, but Democratic Gov. Jerry Brown has been skeptical. In New York, single-payer legislation is stuck in the GOP-controlled Senate.

But if and when one state adopts a single-payer system, it could quickly alter the national political landscape, with implications far beyond the fight for healthcare reform. For DSA, the fight for single payer is intended to be the first stage of a revolutionary program.

“The single-payer campaign is really about training hundreds of young people who have never been involved in activism or politics to get brass tacks organizing skills, which are door-todoor outreach,” says Ari Marcantonio of East Bay DSA. “We’re using it to build a mass socialist organization, city by city, and the power and the infrastructure we need to win all kinds of things—like a living wage for all workers and housing as a human right.”

Fundamentally, he says, the aim is to “challenge the very deeply ingrained notion that markets are our friend.”