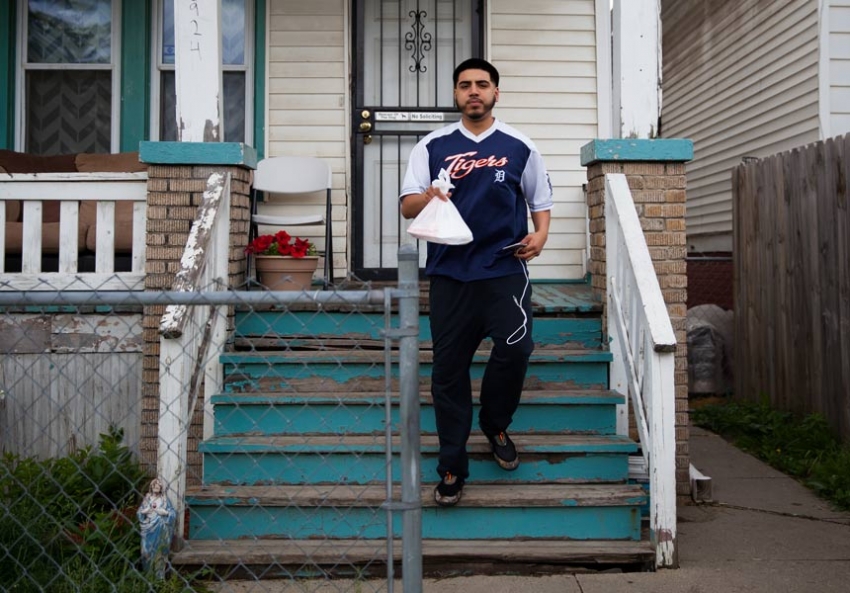 “Some people might not have nothing to eat, so I tell them to come over,” says Luis Bustos, pictured on his way to deliver food to a neighbor. (Photo credit Erik Howard)

Over decades of poverty, Detroiters have fostered a resilient informal economy based on trust.

“That’s how these little circles of community are marked—by what you share,” says Graeber.

You might have heard about the Detroit comeback. It’s a popular narrative in media silos these days, a tale of investment and revitalization. Young people look romantically to the city as a “blank canvas”—property is cheap, they gush, and the city is coming back.

The problem is this comeback is a myth. The poverty rate is nearly 40 percent, and despite the influx of young whites lured by promises of a Detroit Renaissance, the population continues to decline, from a peak of 1.8 million in 1950 to 670,000 today. Approximately 70,000 households have had their water turned off for lack of payment since 2014, and about 17,000 occupied homes are at risk of foreclosure this year.

The city’s so-called renaissance has reached only small portions of its 139 square miles, leaving much of the population—which is more than 80 percent African-American—behind.

But over decades of poverty, Detroiters have learned to get by without access to traditional cash or credit. There’s a resilient informal economy rooted in neighborhoods and communities: Barter, gifts, time trading and underground businesses are ubiquitous.

Take the vibrant network of off-the-books enterprises such as beauty salons in basements, auto repair shops in back alleys and garages, and, as in Luis Bustos’ case, restaurants in people’s homes.

Bustos, 21, fell off a ladder in 2016, putting him in a wheelchair for three months. With house payments plus a car insurance payment of $270 per month (Detroit’s auto insurance rate is the nation’s highest), he needed money—but after the accident, he didn’t want to go back to the roofing jobs he’d previously relied on. So he started selling tortas (Mexican sandwiches) like his mom used to make, with fresh bread, sauce, milanesa, chorizo and chicken.

He now runs a restaurant out of his kitchen, delivering food around the neighborhood or serving it up in his living room. Although he wants to get a license when he can afford it, he’s candid that he lacks one currently. “I didn’t have money to pay for a license, and I didn’t have time to wait months for permission,” he says. “No one was gonna give me a job, so I had to make a job myself. I woulda lost the house.”

While he does advertise over social media, he’s also become word-of-mouth famous for his food, which matters in an area where smartphones and internet access can be relatively sparse. He’s able to make a bit of money, too, but also realizes the importance of helping others. “Some people might not have nothing to eat, so I tell them to come over. There’s food here.”

Throughout much of the city, there’s an understanding that with no jobs to be had, fellow community members are struggling, too. It’s a necessity, then, to engage in a currency of community.

Traditionally, economists have viewed barter exchange as a primitive precursor to modern money systems. But anthropologist David Graeber argues in his 2011 book, Debt: The First 5,000 Years, that it’s just the opposite: Barter emerges when money and economies fail.

And Detroit’s economy has failed. Spectacularly. It is no surprise, then, that barter, gift, trade and underground businesses have become as essential as cash and credit are elsewhere.

Without formal record keeping or ways of tracking private exchanges, it is difficult to measure just how prevalent this survival economy has become. But by all accounts, it’s pervasive.

The style of exchange differs based on the relationship. Barter, Graeber said in a phone interview, is generally used when people don’t know each other well.

But “people who have long-term relationships with each other share according to their ability and need”—unlike barter, these gifts aren’t one-for-one. “It’s very close to communism,” Graeber says.“You know it’ll even out in the end. You can do that with people you [know] will always be there.”

To some extent, gift economies exist within every tight-knit group. “That’s how these little circles of community are marked—by what you share,” says Graeber. But “in situations with lack of money, that expands to be much more important.”

Perhaps the physical embodiment of the idea is a small storefront, Detroiters Helping Each Other, in southwest Detroit. The space resembles a Goodwill outlet, except—due to lack of funds for electricity—the only light that comes in is through the open front door.

Appliances, furniture, kitchenware, clothing—a little of everything seems to be here, available free of charge to those who need it. People give what they can, when they can (and many donors also take from the shop when they need to). Some items are donated from people in other parts of Michigan who want to help Detroiters out directly. People know not to take what they don’t need, and to give whenever and whatever they can. It’s a crucial community support network for those in crisis—and over the last four years, it’s become deeply integrated into many Detroiters’ lives.

The city’s residents don’t just give or barter goods and services. Like many communities around the world, they also trade time. Southwest Detroit’s time bank is particularly active, and includes individuals as well as local businesses, such as an elder care facility and a garden supply store. For every hour spent giving a service, participants earn an hour of receiving a service. For example, Mary Clare Duran, 65, frequently provides sewing and alterations through the Southwest Detroit Timebank. She then requests yard work from other members. The person who does the yard work might then spend their hours on, for example, auto repair or childcare. It’s a way, says Duran, to save money.

One of the biggest challenges to time banking—which is primarily facilitated online—is the digital divide. But Detroiters have found creative ways around that in other sectors of the informal economy, managing to set up ride shares, for instance, without an app. Nyasia Valdez, 22, received her driver’s license in 2015, and began sharing her car with neighbors and coworkers. Together, they’ve formed their own ride-share network, giving rides, asking one another for a lift, sharing cars and keys. Valdez says their circumstance fosters trust. There’s an understanding, she says, when “I’m struggling too, we can help each other.”

These relationship-based, non-monetary economies are easy to fetishize—just look at the Burning Man festival, where people spend thousands of dollars to celebrate being cash-free and community-oriented. But in Detroit, this method of getting by is born of human instinct in a time of need.

“We’ve been sold an idea that a modern, convenient solution is the key to happiness and success,” but people aren’t happy, says Halima Cassells, founder of Free Market of Detroit, a swap meet where everyone brings at least one item to give away and everything is free to take. “People like being trusted and being in an environment where they are trusted. You can’t buy that.”