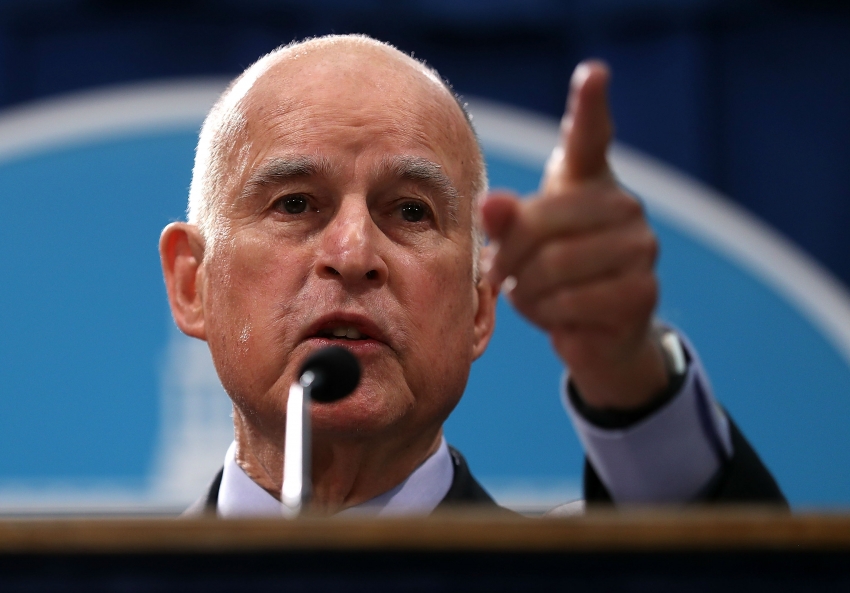 California Gov. Jerry Brown speaks to reporters during a news conference on May 11, 2017 in Sacramento, California. (Photo by Justin Sullivan/Getty Images)

The chair of the California Democratic Party’s progressive caucus explains how it went down.

We're always constantly amazed how it is that California seems to have such a liberal and progressive reputation around the rest of the country.

Last week, the speaker of the California State Assembly, Anthony Rendon, shelved a bill that would have created a single-payer healthcare system. Progressives have looked to New York and California as the best hope for creating a single-payer, universal healthcare system at the state level, and potentially transforming the national debate. Rendon’s decision dealt a serious blow to that hope. It is a particularly painful setback because Democrats, with a supermajority in the legislature, can pass any bill they choose to.

The push for single-payer healthcare dominated the race for California Democratic Party state chair in May. Supporters of Kimberly Ellis were strongly behind it. The winner of that race, Eric Bauman, has also said he supports a single-payer system. But Bauman has been an adviser to Rendon, and a consulting firm he owns has accepted money from pharmaceutical companies to defeat a bill that would have capped drug prices in the state. The Ellis camp is now challenging the results of the election

The single-payer bill’s most influential opponent has been California’s governor Jerry Brown. Rendon derided the proposed legislation as “woefully incomplete.” Brown, Rendon and another member of the California Democratic establishment, Senate leader Kevin De León, have received $3.4 million in campaign contributions from the health insurance industry since 2010.

Karen Bernal, chair of the progressive caucus of the California Democratic Party, recently talked with In These Times about the fate of single payer in California—and the path forward. The interview has been edited for length and clarity.

Theo Anderson: What is the holdup? I mean, I know it's money from the insurance industry.

Karen Bernal: People need to understand that the governor has not supported single-payer for a long time. And everyone has known in advance that that this bill was doomed to fail—that the governor would never sign it. And the only decision about this was where, and in what committee, it was going to die. That's it. I know I'm sounding very cynical right now, but they never had the intention of passing this.

Theo: But everyone in the party supports it except the governor? I mean, in word.

Karen: Yeah, in word, but certainly not in action. The problem we have in politics here in California is that so much of it turns on money. And, you know, I'm sure that the carrot from the governor's office was money going to the election committees of the various legislators to sweeten the pot. And in other places, threatening to block their own pieces of legislation that they would like to see advanced. And that's the stick. They can come in and say, “We'll make sure that won't live to see the light of day. That it'll be killed in committee.”

So those are the kinds of tactics being used here: threats and money. We knew months ago that the governor was lobbying legislators against it. So that's not a huge surprise. Brown said from the beginning that he was against it. We have to understand that, in a system where money determines the structure and the leadership, that's what turns things.

Theo: It's not a secret that money plays a big role in our politics and shapes things. But even so, this level of corruption seems pretty brazen.

Karen: Oh, it's terrible! It's terrible. It's the open secret that everyone here knows about, especially those of us in progressive politics. And we're always constantly amazed how it is that California seems to have such a liberal and progressive reputation around the rest of the country. Because, I mean, we know so many dirty open secrets like that. We have fracking. We do drilling. We can't get single-payer passed even though there’s a supermajority.

Theo: For a lot of progressives, this kind of corruption makes them want to wash their hands of the Democratic Party and say, you know, “Electoral politics is hopeless.” What is your perspective is on that, especially after this really disappointing result with the single-payer fight?

Karen: I think you're right on that. This has a profoundly negative impact on the electorate and the base that the Democrats should count on as the future of their party. The only thing that affected it was the infusion of energy from the Bernie Sanders campaign. It’s going to have a really bad effect on that. Unfortunately, they're caught up in what I would call a downward death spiral here, where they can't seem to do politics without this massive influence of corporate money in the party.

And it’s not as though these politicians, by the way, go out seeking it. It’s that, especially in poor districts, for instance, these interests come to them, and say, “Well, here’s how we can help fix your problems. We have what it takes to fix those problems and provide funding and so on.” Even people who mean well, when they first come in, end up finding themselves trapped in a system where, if they want to get anything done, they have to raise all this money for the Democratic caucus. You know, the speaker of the assembly isn’t the speaker of the assembly just because he’s a great guy. It’s because he can bring in a lot of money. And the same with the committee: They bring in money. It's a terrible situation. So, I can understand how people would feel that way.

We know these were the things that pushed people like Bernie Sanders to the brink of victory. It was because of those outside pressures. But then you're seeing on the inside, this is what happens. It kind of sends a message to people that there's nothing for them in the party. And they're going to stay on the outside.

Theo: Could it also have the effect of galvanizing more pushback, though? I know it's disappointing, but since the corruption is so obvious, it could also inspire people to fight against it?

Karen: Oh yeah, it is definitely doing that. And it has to happen from the grassroots and the base, which is way more progressive than the leadership. We have to send a message, especially to the governor. And this is an important thing to happen, because there will be a governor's race coming up, you know, in the next election cycle. It’s important that we send the message to any new governor that this is not going to be tolerated—that we've got their number and we know where the power the power resides.

Theo: I wonder whether the convention fight set the stage for some of the pushback you've talked about. Single-payer was such a central issue in the convention campaign—in Kimberly's campaign for chair. It got people galvanized.

Karen: To be fair about this, there are many people who supported Bauman who support single payer. And Bauman himself has said that he supports single-payer. And he did put out a message saying that he was, as he said, “unambiguously disappointed.” I find that a curious choice of words. He had to, uh, reassure us somehow?

I think the proof is going to be what he does next as a follow up, in terms of action. Certainly, on the Kimberly side, there is complete unity. We have to galvanize forces, and I think that you're going to see [that energy translated] into action.