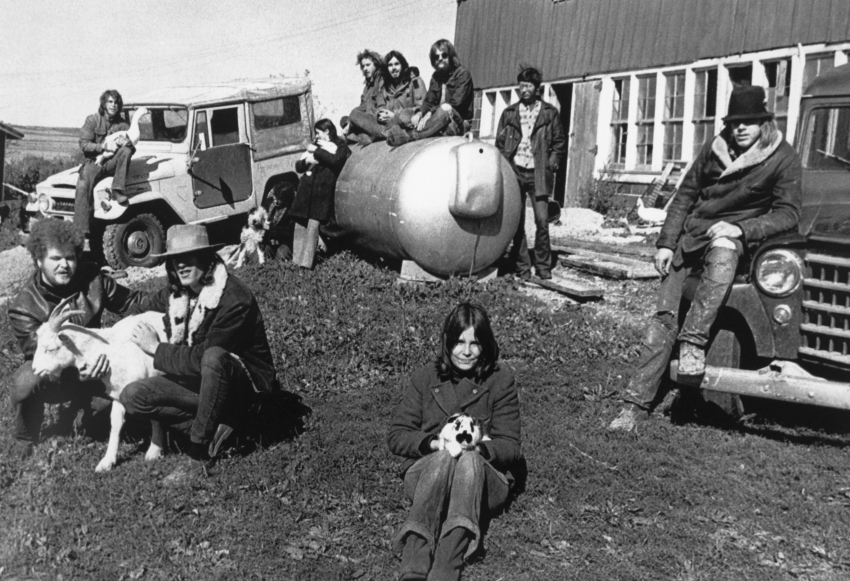 Members of a commune located about 20 miles from Madison, pose for a 'family' portrait outside the barn where they conduct a flourishing candle business 10/23/1969-Cross Plains, Wisconsin. (Getty Images)

Where Have All the Communes Gone?

Dusting off the dirty hippie.

The Left mostly defines itself by what it is against—white supremacy, misogyny, capitalism—but is vague on what it is for.

In the early winter of 1967, Kommune 1 was born in the West Berlin apartment of author and poet Hans Magnus Enzensberger. (He was out of town at the time.)

It was an era of great upheaval, and the Kommune’s founders glommed onto some of the ideas floating around. From Wilhelm Reich, they took the idea that fascism was born of the nuclear family—as he wrote, “The authoritarian state has a representative in every family, the father; in this way he becomes the state’s most valuable tool”—and declared they wanted to abolish marriage, monogamy and the single-family home. From the pre-war Dada movement, they learned that absurdity can be a form of protest, and so while their revolutionary brothers and sisters were taking up guns and bombs, they shat on government buildings and planned an “assassination” attempt on U.S. Vice President Hubert Humphrey by pelting him with pudding, flour and yogurt.

When Enzensberger returned from his trip and found his home taken over by the group, which included his estranged wife and his brother, he kicked them out and they relocated to writer Uwe Johnson’s empty apartment. In Enzensberger’s hodgepodge memoir, Tumult, made up of longform contemporaneous accounts from the 1960s and 1970s and a 2014 postscript, he calls them a “bunch of morons” and “more Marx Brothers than Marx.”

Enzensberger, born in 1929 in Germany, believed in change but was suspicious of revolutionary talk, having seen firsthand what often follows. The Kommune was one of many attempts to reckon with the bloody first half of the century by trying to imagine and build a different future, one less founded on an apocalyptic death wish. We tend to think of 1960s and 1970s radicalism and turmoil as an American phenomenon, with a slight nod to the students in France, but the action was worldwide. From Cuba to Israel to Cambodia, people were experimenting with communal housing, socialism and communism, new ideas about education, and new forms of romantic, sexual and familial relationships while fighting for their civil rights. But, one might say, the revolution stalled. The world took a hard right turn, and today many on the Left look at the hippies and the free-love advocates, the star children and peaceniks and, like Enzensberger, think, “what a bunch of morons.”

Once again, the world is looking a lot like the 1960s and 1970s, with a renewed Black freedom struggle (and the return of white nationalists carrying the Confederate flag down American streets), and the spread of political violence and terrorist groups. The methods and the motivations are different, but the challenges are similar, as is the shift to political extremes. Worldwide, people recognize the need for real, dramatic political and cultural change. But what’s missing today are the weirdos of the counterculture, willing to dramatically change their lives and dream up new ways of being on the planet.

Since the end of the 20th century, leftists haven’t been coming up with new ideas about how the world could be different. The Left defines itself mostly by what it is against—white supremacy, misogyny, capitalism—but is vague on what it is for. While the recent rise of interest in socialism offers a glimmer of direction, neither of its popular leaders, Jeremy Corbyn and Bernie Sanders, has presented clear ideas of how it would be implemented or what it would even look like. It seems we’ve resigned ourselves to neoliberalism, rapacious capitalism and endless war. The most radical suggestion anyone ever comes up with to deal with the housing shortages in every major city around the world is maybe to build some more rent-controlled housing. Where are the champions of socialized housing, communal living with private quarters but shared domestic spaces (co-housing), single-sex communities, or even large-scale occupation of the increasing amount of vacant real estate bought only as investment? Our relentlessly profit-driven healthcare system is one of the most expensive and ineffective in the world, but the dominant progressive fix is to expand private insurance coverage. What about nationalizing the pharmaceutical industry, forbidding religious orders from running hospitals, and revamping the mental health system to prioritize holistic treatment over drugging patients into stupors? Marriage remains a support system for the patriarchy, but no one even talks about abolishing marriage anymore (except for maybe me, inappropriately, at parties, after a couple martinis). It’s as though we've decided this world is inevitable and we must adjust ourselves to it, rather than adjust the world to better suit us.

As Czech political dissident-turned-president Václav Havel noted, politics follows culture, so there will be no revolution or improvement in our condition coming down through the legislature. To believe otherwise, to legislate cultural issues through politics and ignore the will of the people, is to support tyranny. Using the government as the central mode of reform does the Left no favors. When Roe v. Wade was upheld, for example, neither the mainstream nor the Left was prepared for such a shift. The Right immediately went about grinding down abortion rights with both a cultural and legislative assault.

The “culture” Havel refers to does not mean progressive television shows or social media campaigns, by the way. It means people’s attitudes and how they live their lives. If we want marriage to be abolished (I want marriage to be abolished), that means people must both stop participating in that institution and create structural alternatives for what marriage gives its participants: a role within the community, parenting rights, housing arrangements. The governmental part of marriage—health insurance, tax breaks, estate rights—can only be broken down when the institution itself is weakened by indifference. This is the same for nearly every other issue we face, and we face many.

If we believe in radical change, why aren’t we living radical lives? It is this resignation Enzo Traverso examines in Left-Wing Melancholia: Marxism, History, and Memory, published in 2016. In part, he says, it’s because the memory of radicalism’s failures is too fresh in our minds. How we remember our past determines how we envision our future, and we tend to remember armed rebellion and violent action over the cultural experimentation that happened simultaneously. Hope for a better world, Traverso notes, could thus be blamed for fascism in Spain, a bloody coup in Nicaragua, and Soviet totalitarianism in Romania, Poland and Bulgaria. Even the left-wing experiments could be labeled failures: Kommune 1, like many, disbanded after a couple of years and never picked up more than a handful of members. After all these failed revolutions, how does one recover and try again?

Traverso argues that we allow the failures to eclipse the importance of the attempts, and that we let the truly radical be tarred by association with the merely fashionable. He distinguishes between the bohemian, who is a negator of bourgeois society, and the dandy, who “has withdrawn into the cult of the self.” Where feminism and queer culture used to champion bohemianism, envisioning a world “in which kinship, sexual division of labor, and the relationship between public and private were completely reconfigured,” they now retreat into self-empowerment-oriented identity politics. There, the particular self is studied without being emancipated, and experimentation is for personal gratification rather than for the purposes of societal disruption. But the choice of bohemianism, of consciously rejecting the material comforts of our capitalist society, was the starting point of Marxism—both Marx’s and Trotsky’s self-imposed marginalization were catalysts of their philosophies—as well as artistic revolutions such as surrealism and cubism.

Even Enzensberger, after thoroughly denigrating the Kommune, admits in a postscript, “The tumult had not been in vain.” To call these social movements failures says a lot about our cynicism and how little we understand historical change. “It depends on what it produced in the long run. Not just for me but also for the vast majority, even for those who had nothing to do with it,” he writes. “For to my surprise—very gradually, almost behind our backs—our desolate country was becoming more and more a land that was fit to live in.” All of those social deviants of the 1960s and 1970s counterculture, by taking a nonviolent, extreme position, managed to pull the culture closer to them. The once-conservative German society now has very low marriage rates, a blasé attitude toward single parenting, and an innovative and successful educational system—all areas the Kommune and similar groups were experimenting with.

But not only that; Enzensberger also reports that after this period of social experimentation, society felt different, less authoritarian and formal. The job of the Kommune’s founders and those like them was not to create long-lasting institutions, but to show the world that many of the institutions we take for granted are not necessary. It was to show us that a radical future is possible. We need weirdos like this more than ever before.

Jessa Crispin is the founder and editor of the magazines Bookslut.com and Spoliamag.com. She is the author of The Dead Ladies Project, published by The University of Chicago Press, and The Creative Tarot, published by Touchstone. She has lived in Kansas, Texas, Chicago, Ireland, Berlin, among other places. She currently lives in Baltimore and Berlin.