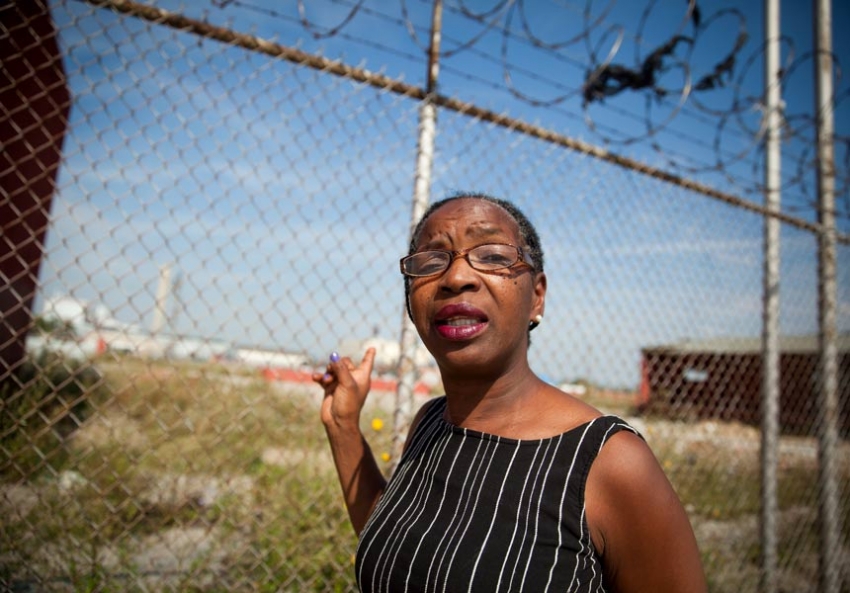 The incinerator, owned by Detroit Renewable Energy, violates several air quality standards, including but not limited to odor.

DETROIT— One morning in Detroit’s Midtown neighborhood, I saw the air turn a heavy yellowish-green, like a thick fog. It stunk so badly, it hurt to breathe. Those who braved traveling through it risked nausea and even vomiting.

Kim Schroeder remembers countless days in recent summers when her children haven’t been able to go outside because of the odor. “The smell was stomach-churning,” she says.

Some from the ’burbs might just tell you it’s the “smell of Detroit,” but it’s more than that. Schroeder calls it the “sickly sweet smell of rotting garbage,” and it comes from one of the largest garbage incinerators in the United States, two miles away.

“It’s been a health nuisance since it was built,” says Sandra Turner-Handy, community engagement director for the Michigan Environmental Council and, with Schroeder, a member of the Zero Waste Detroit coalition.

The incinerator burns trash from across the region. Schroeder is planning an educational campaign in counties across Michigan that ship garbage to Detroit, including affluent Oakland, Washtenaw and Kent counties, and as far away as Canada and Ohio. She encourages people to find out where their garbage is going and to “lobby their reps to deal with their garbage, rather than dump it on a poor city.”

Turner-Handy works to increase curbside recycling in Detroit in order to reduce the amount of local waste going to the incinerator. The program is growing, but less than 15 percent of city households participate.

Nearly 90 percent of those living within a mile of the incinerator are people of color. African Americans are twice as likely to be hospitalized for asthma in Detroit than whites, and the hospitalization rate due to asthma in some ZIP codes is six times the state average. Of America’s largest cities, Detroit has the highest asthma rate among young children, according to a study conducted by Johns Hopkins Bloomberg School of Public Health.

“Low-income people and people of color are statistically so much more likely to live next to a polluted site,” says Nicholas Schroeck, director of the Transnational Environmental Law Clinic at Wayne State University. Detroit, he says, has “the most polluted ZIP codes in the state of Michigan. When you take high rates of asthma next to sources of industrial pollution, you see patterns.”

Schroeder’s stepdaughter has asthma, and Schroeder herself recently had breast cancer. She wants to know if it’s related to the incinerator, since she has no genetic indicator for the disease. Yet, as the necessary studies have not been done, there is no hard evidence that the incinerator—or any other industry, such as the Marathon gas refinery or the U.S. Steel plant—is responsible. Schroeder wants the issue to be studied further.

Thanks to pressure from community groups, lawsuits, bad press and a 1-800 number to report odor, the Michigan Department of Environmental Quality (the same folks who said Flint’s water was safe to drink) and the state attorney general’s office have issued new pollution controls on the incinerator in recent years. But, says Schroeder, this has “not sufficiently improved our quality of life. The smell still hovers in many neighborhoods.”

Even with these controls, the incinerator, owned by Detroit Renewable Energy, violates several air quality standards, including but not limited to odor. Violations of particulate matter, sulfur dioxide and carbon dioxide—all three known to cause respiratory issues and other ailments, with the potential to cause death— continue. As bad as the smell is, says Turner-Handy, “It’s what you can’t see and smell that’s gonna hurt us the most.”

But shutting down the incinerator—or any industrial plant in Detroit—is extremely difficult once a permit is issued, says Schroeck. He believes it’s crucial to stop these kinds of facilities before they start.

Meanwhile, Detroit’s population continues to decline. “I’m hoping the city will realize, if you’re expecting a new population to move in, it’s not agreeable if there’s an incinerator,” says Turner-Handy.

“I want to know if I have to move,” Schroeder says. “I love Detroit. The sense of community here is fantastic. … But if there’s health issues we’re introducing to our families by living here, we need to know that.”