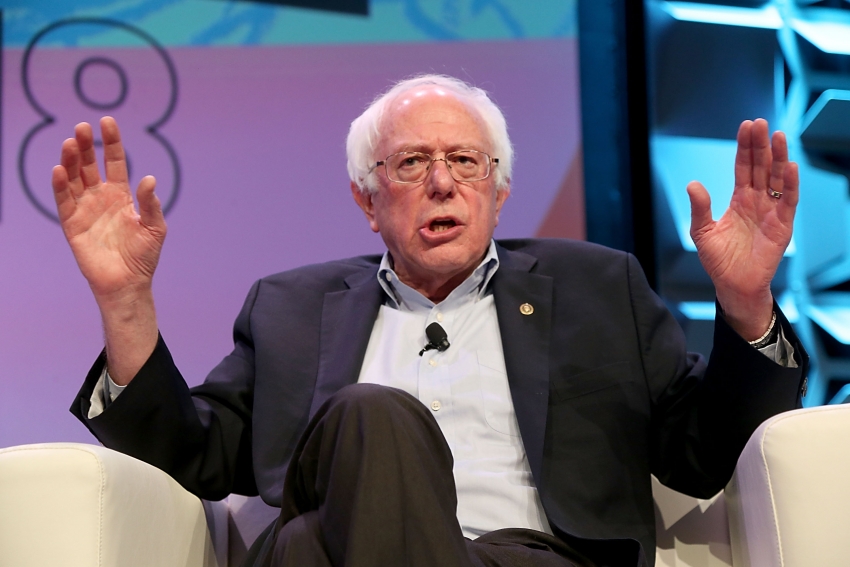 Hamilton pointed out the immorality of putting the interests of corporate shareholders above the needs and well-being of everyday Americans. “Somebody's dignity should not be based on the profitability of a firm,” he said.

In the ongoing political war between Right and Left—between demagoguery and egalitarianism—clear and open lines of communication are critical. Donald Trump has his Twitter account. Bernie Sanders has his live-streamed town halls.

Trump and his populist pose have inspired plenty of bogus comparisons with Sanders, but the two men do share a gift for getting around establishment media and taking their message straight to the public. Sanders did it again on Monday night, following up on his January Medicare-for-all town hall—which reached an estimated 1.6 million viewers—with an event titled “Inequality in America: The rise of oligarchy and the collapse of the middle class.” Along with Sanders, the town hall featured Sen. Elizabeth Warren (D-Mass.), filmmaker Michael Moore and economist Darrick Hamilton, along with other guests.

As with the healthcare town hall, the event was live streamed by independent and non-traditional media outlets, including the Guardian, Now This, The Young Turks Network and Act.tv, as well as on the Facebook pages of Sanders, Warren and In These Times. In total, the town hall reached an estimated 1.7 million viewers, eclipsing Sanders’ previous town hall audience.

Beyond their rogue media strategies, Trump and Sanders are also both deft at helping to expand the “Overton window,” which is a wonky but useful shorthand for the range of ideas and policies that people take seriously, and seem possible, at any given moment. The concept is named after its originator, Joseph P. Overton, a former senior vice president of the Mackinac Center for Public Policy.

Take the $15 minimum wage. It fell outside the Overton window five years ago. It’s now well within it. Ditto with same-sex marriage in the decade spanning the early 2000s to the early 2010s. Right-wing pundit Glenn Beck has been especially enamored of the Overton window concept. In 2010, he published a novel with that title. The theme is that progressives are plotting to destroy traditional American values through a program of subtly subverting liberty and indoctrinating the youth.

There’s nothing subtle about what is happening now, though. This moment seems surreal and volatile because the window is expanding rapidly on both ends of the ideological spectrum. Trump and Sanders aren’t the only forces behind the shift, but they’re the most visible and influential ones.

On the Right, white nationalists are empowered by Trump to march in the streets, and the immigration rhetoric has moved from pushing to deport undocumented people to questioning whether we should welcome immigrants into the country at all.

On the Left, a cluster of ideas that were marginal to the political mainstream debate a few short years ago are now right there in the thick of it—not only a $15 minimum wage and universal, single-payer healthcare but free public college, free child care, paid family leave, pot legalization, fundamental criminal justice reform, a federal jobs guarantee and much more. Such policies, which were highlighted at various points throughout the town hall, have been brought into the mainstream thanks in large part to Sanders’ 2016 presidential campaign as well as the dedicated work of grassroots activists and social movements over recent years. And they are likely to form the policy planks of a potential 2020 presidential run for Sanders or another left-wing torchbearer.

Sanders devoted the final segment of his 90-minute town hall to the question of why, despite broad public support for these types of progressive policies, they are seeing little to no movement at the federal level. Gordon Lafer, an economist at the University of Oregon and the author of a book about the American Legislative Exchange Council (ALEC), explained that laws are rigged by the corporations that fund the politicians who do their bidding, in a vicious cycle of deepening corruption.

The first segment of the town hall documented the dystopian realities of a rural black community in Lowndes County, Alabama that has no sewage infrastructure. It also focused on the soul-crushing poverty of the millions of people across the country who live under the constant threat (or reality) of homelessness.

Hamilton pointed out the immorality of putting the interests of corporate shareholders above the needs and well-being of everyday Americans. “Somebody's dignity should not be based on the profitability of a firm,” he said.

Sanders says often that his town halls are necessary because he’s covering issues that the corporate media won’t touch. “It is fair to say that in the last hour and a half,” he said in concluding the event, “that we have discussed more issues that are of vital importance to the American people than have ever been seen on a television screen in the history of this country.”

And it’s true that while mainstream outlets remain focused on Stormy Daniels and Russian interference in our elections, they largely ignore the critical economic issues facing the majority of Americans. As Sanders put it in a recent Guardian op-ed: “We need to hear from struggling Americans whose stories are rarely told in newspapers or television. Unless we understand the reality of life in America for working families, we’re never going to change that reality.”

Yet despite corporate media’s obsession with scandal and intrigue, bread-and-butter economic issues are still what most concern Americans. Last summer, for example, Bloomberg News released the results of a poll that asked people their opinion about “the most important issue facing the country.” A substantial plurality—35 percent—said healthcare. It scored higher than immigration, taxes, terrorism and the U.S. relationship with Russia—all of the topics that have dominated the news cycle in the corporate media for the past year—combined.

What we are witnessing is an immovable object vs. unstoppable force situation. On one hand, the corruption by special interests of our political system makes it incapable of passing laws that serve the public good and benefit the people. On the other hand, the people, who may not know in detail how wealthy donors and corporations buy off politicians, can see what’s right in front of their noses: This political system is rotten and broken. Or, more accurately, it’s working exactly as intended—to enrich the rich, buttress the oligarchy and drive inequality off the charts.

Such corruption generally has the effect of encouraging cynicism, disengagement and passivity among the public. If we are facing an unmovable object, why bother? Why vote? Why anything.

The remarkable thing about this moment is that—partly driven by the shock of Trump, partly by progressives’ success in expanding the window of what seems doable—cynicism is being channeled into resistance, and the pursuit of a bold progressive economic vision.

One live-streamed town hall focused on inequality may not seem like much, given the scope and depth of the challenges we face. Similarly, one vote rarely makes a difference in the big picture. But one by one, they add up to everything.