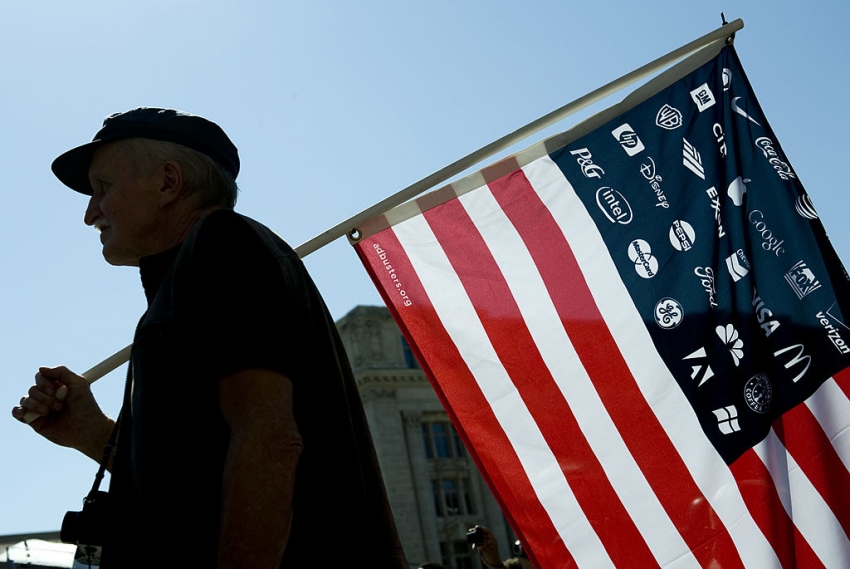 Gordon Lafer began working on his book soon after the 2010 election, which was a crushing defeat for Democrats. (Photo by Linda Davidson / The Washington Post via Getty Images)

How Corporations Rig the Rules and Crush Dissent

A new book by Gordon Lafer shines a spotlight on the super-rich.

'If there’s an alternative to old-fashioned, face-to-face organizing around issues, I don’t know it. I think that’s what we have to do.'

Gordon Lafer began working on his forthcoming book—The One Percent Solution: How Corporations are Remaking America One State at a Time—soon after the 2010 election, which was a crushing defeat for Democrats at both the state and federal levels. Republicans gained control over both chambers in 25 state legislatures, and they won control of 55 legislative chambers overall—19 more than they controlled going into the election.

That landslide allowed Republicans to launch a state-level attack on progressive policies and institutions. The American Legislative Exchange Council (ALEC), which promotes and coordinates right-wing legislation in statehouses, played a key role. With the election of Donald Trump, Lafer says, “we’ll see a lot of the corporate agenda that was pushed by ALEC and enacted in the states moving to Congress. You’ll see a lot of it being pushed by the administration.” That agenda is particularly hostile to unions and the rights of workers.

Lafer is an associate professor at the University of Oregon’s Labor Education and Research Center. He served as senior labor policy advisor for the U.S. House of Representatives’ Committee on Education and Labor in 2009 and 2010 and has worked as a union organizer and researcher.

In These Times recently spoke with Lafer about The One Percent Solution, which will be published in April by Cornell University Press.

What were the origins of the book?

At the start of 2011, there was this huge wave of anti-union and anti-worker legislation. I was asked to do research on a so-called “right-to-work” law in Indiana, and then got asked to do more research on the same subject. And I saw that a lot of people—academics, reporters and political people—were dealing with these as one-off pieces of legislation. Here’s this bill in Indiana, in Michigan, in North Carolina, as if they were isolated events that came out of the minds of the politicians who had introduced them. But there was obviously a pattern to it and you saw the same interests—the same corporate lobbies—introducing a whole series of similar bills. And that got me to thinking about who’s really behind this, and what’s the connection between trying to cut unemployment insurance here, and trying do away with unions over here, and cutting the budget for health care over here.

What were other key factors in the state-level strategy, in addition to ALEC’s work?

2010 was the first election after the Citizens United decision, which came in January 2010. And within months of that, a bunch of new initiatives were launched to take advantage of it. And one of the other things that was launched was the Redistricting Majority Project—they called it REDMAP. And it was a project that was hatched for Republicans to take control of state legislatures in 2010, partly because they knew that the legislatures elected that year would be the ones to redraw the district maps for both state and federal districts. That was made possible by Citizens United. They worked with the Chamber of Commerce and a ton of money came into that project, which was quite successful. Eleven state legislatures went from being either split between the parties, or controlled by Democrats, to being controlled entirely by Republicans. And among the states that were targeted and came under Republican control were the string of states across the Midwest that were traditionally labor strongholds and political battleground states—Pennsylvania, Indiana, Ohio, Michigan and Wisconsin. And when they took over there, the politicians and, even more so, the corporate lobbyists, thought, “we don’t know how long this will last.” And there was a rush to push things through, even if they had to win ugly. And I think we’re going to see something similar in the federal government.

What did they do with their power?

What is the problem that the 1% needs to solve? Politically, their single biggest problem is: How can they advance policies that continue to make the economy more unequal while avoiding a populist backlash? And there are different solutions and strategies. But one of them is to lower everyone’s expectations. That happens in a number of different ways, but the legislative work is definitely part of it. Some of it is privatizing public services, which means that you get used to doing with less—less health care, fewer libraries, crappy schools. But also, when a service is completely privatized, there’s no one that I can complain to. And that’s one of the things they’re trying to accomplish—to make it harder to protest, and to take away the institutional and legal channels for people to protest corporate prerogatives. All of it is part of a strategy of lowering expectations and conditioning people to accept less and less and less.

Has Trump’s election shaped your thinking about the book’s themes?

There’s going to be a lot of attention paid to what’s happening in D.C. And one of the things that I think is potentially hopeful is that a lot of the corporate agenda, on an issue-by-issue basis, is broadly unpopular. A lot of the states that elect conservative legislatures, they vote for minimum wage increases or vote for Citizens United to be overturned—all kinds of things. Arizona, last fall, voted for Trump and also voted to raise its minimum wage. So, I think there’s much more consensus in the country around progressive ideas than around which party to vote for, and I think that does give some grounds for hope for organizing around specific issues. People on the Left need to look at those parts of the Trump voters that it’s possible to make a coalition with.

Do you have suggestions for doing that?

If there’s an alternative to old-fashioned, face-to-face organizing around issues, I don’t know it. I think that’s what we have to do. I don’t think this is winnable just by social media, and I think we’re much more likely to excite and energize people around issues than around Democrats, or around a particular candidate.

Did anything surprise you in the research?

One thing that surprised me is the extent to which the super-rich are already plotting an exit strategy in case the American empire falls apart. High, high level Wall Street people are talking about how they and their friends are buying private islands and private landing strips. I found three companies that are converting old nuclear missile silos—one of them is called Luxury Survival Condo. Some of it is a fear of terrorism, but some of it is that the economy could fall apart and there would be total anarchy. People at the very top, who presumably have a pretty good view of the economy, think that things might crash. And even the fear that things might crash doesn’t move them to say, “oh, we better share the wealth a little more.”

You mean they fear a crash because of rising inequality?

Some of it is purely based on inequality. Some think there’s going to be another French Revolution. So you would think if you’re afraid of another French Revolution, the solution is to say, “maybe we have enough and should share the wealth a little.” Instead, they have an apartment in Shanghai, or wherever their escape hatch is. And that’s a part of globalization that’s not well understood. We’re in a situation where some of the most powerful political actors in America are “American” companies, in the sense that their headquarters are here, but to whom America is less important than it ever was before, either as a workforce or as a consumer base. And we’re seeing a decoupling of the countries that are most influential in American politics, versus how much the fate of America actually matters to their bottom line.