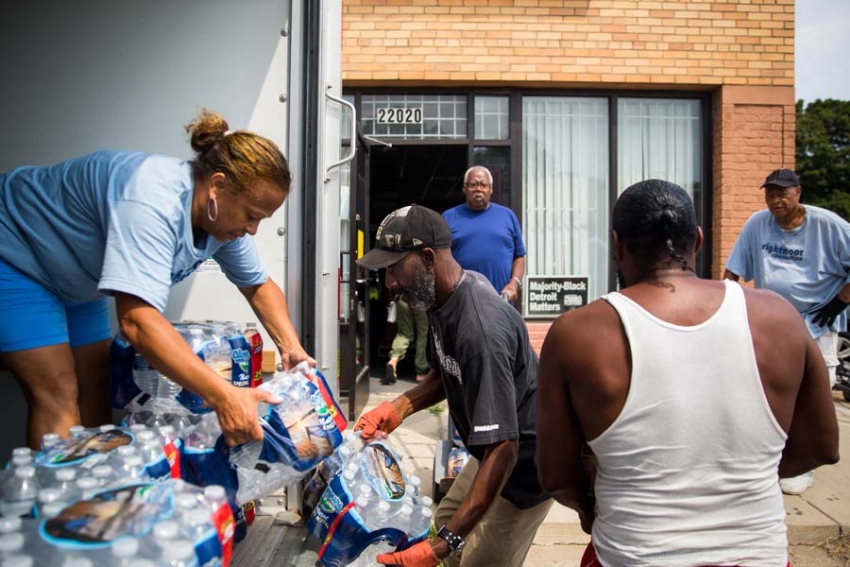 As thousands of Detroiters have their water shut off over debt, neighbors are helping each other to access water without alerting Child and Family Services.

According to a recent University of Michigan study, water bills in the Detroit metro area average $100 a month, about twice what federal affordability standards dictate.

DETROIT—It’s north of 90 degrees and humid, and Rev. Roslyn Murray Bouier is sweating bullets at the Brightmoor Connection Food Pantry in Detroit as she directs more than a dozen volunteers unloading 84 cases of water from a U-Haul. It’s for Detroiters without running water.

People stand by, waiting for their turn. A mother with two young children picks up 10 cases. One woman who lives with her five grandchildren has a rash on her arms—perhaps from stress, perhaps from not having running water, perhaps both. The mother and the grandmother are terrified to talk with In These Times. They have reason: According to activists, Child Protective Services (CPS) often removes children from homes that don’t have water (although CPS, maintains that a water shutoff is never the sole reason for removal). Valerie Jean Blakely, an activist who helped organize her neighbors against a mass water shutoff, says that some parents keep their children home from school for fear they’ll let slip to teachers that they have no water and CPS will be called.

Bankrupt, Detroit implemented the shut-off policy in 2014. Since then, according to the nonprofit We the People of Detroit Community Research Collective, more than 100,000 households have had their water turned off. The shutoffs can begin fast, when a bill of just $150 is 30 days past due.

Detroit has both the highest poverty rate of any major U.S. city, at 36 percent, and among the highest water rates. According to a recent University of Michigan study, water bills in the Detroit metro area average $100 a month, about twice what federal affordability standards dictate.

The city offers a payment plan for those with past due bills to get their water back on, but many residents see it as a scam. Bouier says it requires payments as high as $200 a month, which may amount to half the paycheck of those on fixed incomes or who can only work part-time.

The city, meanwhile, has found the money to pay subcontractor Homrich—a wrecking company—$7.8 million to turn off Detroiters’ water over the next three years. Seventeen thousand homes were at risk shutoff this summer.

Lack of water, combined with the hot weather, poses health risks, especially for old people, children, the disabled and those who are pregnant, since dehydration contributes to miscarriage and birth defects. A study by the Icahn School of Medicine found that water-borne diseases, such as Hepatitis A, were more likely to occur on Detroit blocks that had experienced a water shutoff. The Detroit area is experiencing the worst Hepatitis A outbreak in the nation, which began in 2016.

The shutoffs have inspired massive local mobilization: Four emergency water stations like the one in Brightmoor have sprung up around the city. The stations take monetary and bottled water donations and annually distribute 130–150 tons of water. Volunteers even drop off water directly to the homes of those who are unable to pick it up. The drop-offs often happen at night, so nosy neighbors will be less likely to call CPS.

Detroiters are also helping each other informally. Those who have water can run foodgrade hoses to supply neighbors who don’t. Some without water simply do their own plumbing to bypass the water meter. A special tool can be used to (illegally) turn the water valve back on. Those with the tool lend it freely to neighbors.

The Michigan National Lawyers Guild reports that some people with illegal water hook-ups have been prosecuted for “malicious destruction of utility property,” a felony. Monica LewisPatrick, president and CEO of We The People of Detroit, calls for the “decriminalization of people’s access to water.” Water isn’t meant to be “named and claimed,” she says. “Every living thing has a right to water.”

The water shutoffs are traumatic, says Blakely, but it has also brought people together. “You don’t just think about yourself, you think about everyone,” she says. “It’s awful beautiful. We come together through love and mutual aid, and make sure everyone has what they need.”