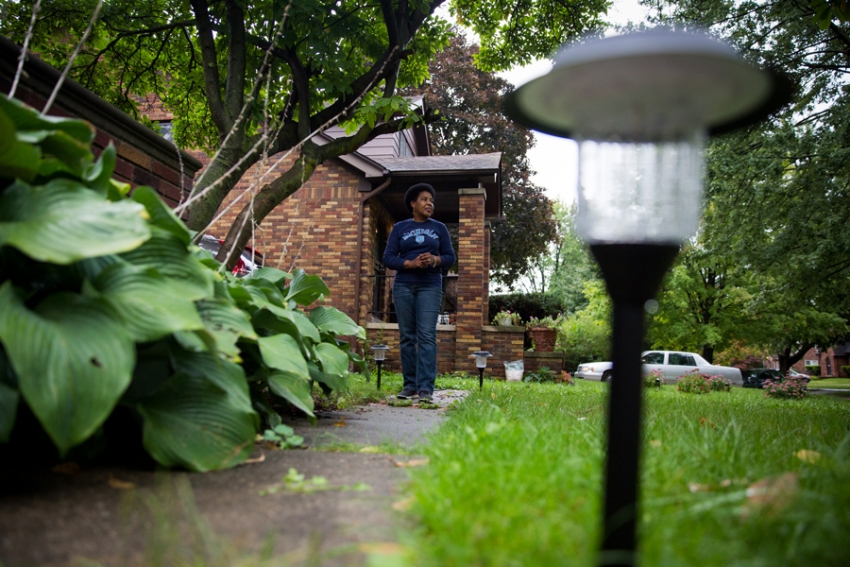 In the Shadow of Detroit, a Michigan City Is Taking the Solar Transition Into Its Own Hands

Amid poverty and frequent power blackouts, a cutting-edge renewable energy program is underway in Highland Park.

'It’s fueled by the God-given sun. The lights at our house are on. Because of that, I’m on the bandwagon.'

DETROIT—Linda Huff’s street is often dark because of frequent neighborhood blackouts, but her house always shines bright. New outdoor solar-powered lighting makes her home look and feel safer than the others on her block.

Huff participates in a bulk solar-buying club with the Highland Park-based nonprofit Soulardarity, one of the most forward-thinking solar programs in the country. Soulardarity launched in 2012 after power company DTE Energy shut off 1,400 streetlights in a deal to save the municipality $4 million. The group put forward a plan for citywide solar streetlights.

Highland Park is a small city inside Detroit, one of two communities that incorporated before a rapidly expanding Motor City could annex them. This is where Henry Ford built the Model T. Once booming, Highland Park now has a poverty rate of 46 percent. Blight, arson and deep potholes are ubiquitous. The electric grid is old and poorly maintained, resulting in frequent blackouts.

Worse, DTE plans to raise residential rates by 9 to 12 percent as early as June 2019. “If we don’t change this dynamic, utility costs will contribute to displacement,” says Jackson Koeppel, 26, executive director of Soulardarity.

To create energy resilience, Soulardarity launched a program in 2016 that lets residents purchase solar infrastructure for their homes or businesses at bulk rates. The program has 75 participants in Highland Park and neighboring Detroit. Each purchases and installs enough solar panels to power exterior lighting, a lamp, laptop or cell phone charger. No one has been able to take their homes entirely off-grid—yet.

Huff has bought solar for both the Shekinah Tabernacle Gospel Church, where her husband ministers, as well as their home. She never before saw herself as an environmentalist: “I’m not gonna sit here and tell you I was all solar this and clean water that,” she tells In These Times. But now she’s a convert. The outdoor solar lights have lowered her electric bills and don’t come with the hazards of regular electric power, such as the frequent blackouts in her neighborhood or the downed, live power line in her backyard.

Soulardarity is also supporting Parker Village, an area of Highland Park being developed into one of Michigan’s first “smart neighborhoods”—one built around sustainable energy and green design. It started because lifelong Highland Park resident Juan Shannon wanted to build an aquaponic fish farm and raised garden. He needed power to pump captured rainwater, and wanted to do it in a way that was eco-friendly and save money. Solar was the answer.

Soulardarity brought together multiple groups to help Shannon build a solar station, including the Ann Arbor-based Appropriate Technology Collaborative, which specializes in teaching how to install solar around the world. The Black Caucus Foundation of Detroit brought in high school seniors to learn how to install a solar panel.

The finished solar station is only about the size of a small garden shed, but it can power Shannon’s water pumps with energy left over to charge cell phones and power tools needed for construction on the project’s next phase. A shuttered elementary school will be transformed into the Parker Village Community Resource Center, from which Shannon plans to work with the community to build out a whole new infrastructure for the surrounding block: LED lighting, solar power and blue infrastructure to manage wastewater and storm water runoff.

While Shannon works on that, Huff is looking forward to purchasing more solar infrastructure through the bulk program and further educating her community about the benefits of solar. “It’s fueled by the God-given sun,” she says. “The lights at our house are on. Because of that, I’m on the bandwagon.”