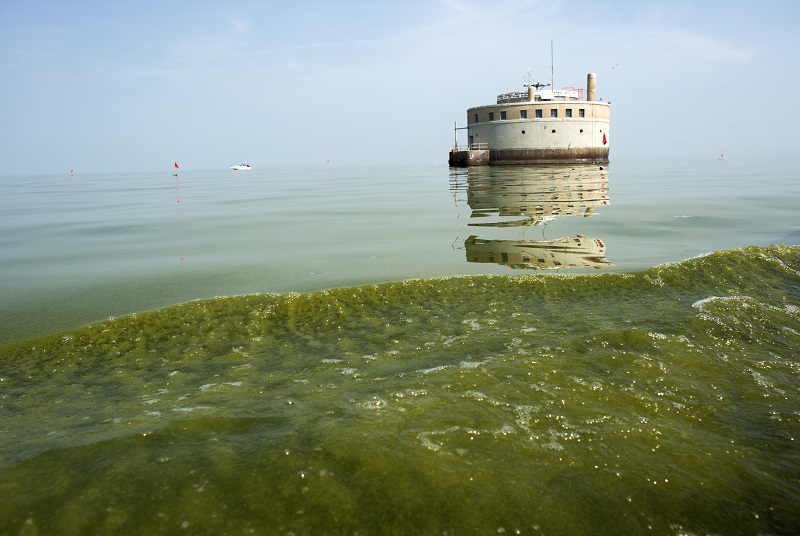 A tow boat kicks up green algae a few hundred feet from the city of Toledo's Water Intake on Lake Erie. Such algae blooms, a result of runoff from farms, threaten the drinking water of nearby residents. (Photo by Ty Wright/For The Washington Post via Getty Images)

Our Freshwater Emergency Is Worse Than You Think

Blue state governors can lead the way with a visionary water policy that focuses on prevention.

The seven Democratic governors who ousted Republican incumbents in November 2018 have another challenge ahead: Each of them faces a freshwater emergency. We use billions of gallons of fresh water each day for drinking, washing, cleaning, mining, manufacturing, construction, farming, moving waste, making electricity and cooling power plants. Most of it comes from rivers, lakes and underground aquifers. The federal government has not moved fast enough to keep up with a cascade of new chemical threats to drinking water, dwindling volumes of fresh water in the Southwest, and the degradation to water quality caused by the droughts and deluges amplified by climate change. This did not start with Trump, but it has gotten worse with climate deniers in charge and appointees, like acting EPA head Andrew Wheeler, who have outright sabotaged regulations.

Blue states can take the lead on protecting water where it counts most: at the source. They can articulate an urgently needed national water vision.

Why start with the source? Because even the best, most technologically advanced water treatment technologies cannot address the volume and variety of chemical toxicants in America's water. A full accounting of the quantity and kinds of chemicals used and discarded or leached from products is unknown. Trade secrets and ossified federal regulations are largely to blame for this. Concern about a class of manmade chemicals, PFAS, in drinking water was a factor in the Michigan gubernatorial race, where there’s public alarm. These toxicants, which are unregulated by the federal government, made by 3M and used in products like nonstick pans and stain-resistant upholstery, have recently been found in water supplies in Maine, Michigan, Illinois and Wisconsin. The nonprofit Environmental Working Group estimates they may be in the drinking water of up to 110 million Americans. They cause serious health problems, including cancer and immune dysfunction.

Climate change is also making water issues worse. In New Mexico, stretches of the Rio Grande have gone dry. The Colorado River Basin has been in an extended drought. The Ogallala Aquifer that quenches the thirst of western Kansas and supplies the plains with most of its irrigation is disappearing. Drought exacerbates water pollution. Climate change means there’s less water in some places, a lot less, so rivers are running with larger and larger percentages of wastewater from sewers.

A 2012 National Academy of Sciences report said that 24 major water utilities used rivers from which wastewater accounted for over 50 percent of the flow under low-flow conditions. That was in 1980. Since then, the population has increased 35% and so “it is likely that the contribution of wastewater effluent to water supplies has increased.” A section of the Trinity River south of Dallas, Texas, consists almost entirely of wastewater effluent from the Dallas/Forth Worth wastewater treatment plant.

If you are thinking wastewater treatment solves the problem, think again. A July 2018 paper in the journal Science reports, “As the diversity and volume of chemicals used have risen, water pollution levels have increased, and conventional treatment of wastewater and potable water has become less efficient. Even advanced wastewater and potable water … treatments have limitations.” Blue state governors should stop the rebranding of wastewater treatment plants as “water resource recovery facilities” and “water renewal facilities.” It's gaslighting the public with the public's health at stake.

The Great Lakes hold 95 percent of the surface fresh water in North America, making the new Democratic governors of Michigan, Illinois and Wisconsin freshwater royalty. But their great treasure is in trouble. The amount of water taken from the lakes for thermoelectric power production, public water supply, and industrial use is a head-spinning 42.2 billion gallons a day. Lake water also cools more than 30 nuclear reactors, which then return the heated water back to the lakes, causing thermal pollution. Agricultural runoff threatens drinking water systems as well. Four years ago, half a million people in and around Toledo, Ohio, were warned not to drink their water because of a massive bloom of cyanobacteria in Lake Erie, a result of nutrient runoff from farm fields and factory farms. Restoring the lakes to health requires an ecosystem approach that starts in the surrounding watershed basins. How we manage livestock, what food we grow and how, and soil health are fundamental to water quality in the Great Lakes region and across the nation.

Blue state governors can lead the way with a visionary water policy that focuses on prevention. Such a vision would recognize climate change and chemical pollution as two great threats to our freshwater resources, but it wouldn’t stop there. It would lay out a plan of action founded on protecting water at its source, aggressively dialing down emissions of greenhouse gases, advocating public ownership of water infrastructure to ensure its democratic control for the public good, and recognizing fresh water as an integral part of ecosystem restoration. It is time to care for water as if our lives depended on it.

Bayer Engineered a New Corn Seed That’s Resistant to Five Herbicides. But How Long Will It Work?