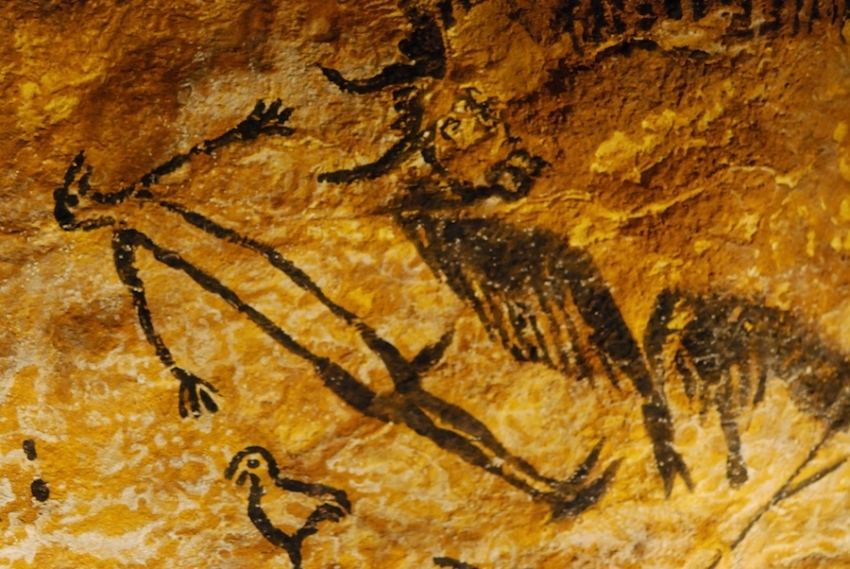 A new study in the Athens Journal of History argues that cave paintings like the Lascaux Shaft Scene in France (circa 15,200 B.C.) are records of comet strikes, using an ancient zodiac passed down for millennia. Some evolutionary anthropologists believe that such inherited cultural knowledge has been key to human survival. (MIRA OBERMAN/AFP/Getty Images)

There’s a Vanishing Resource We’re Not Talking About

Humans are losing our cultural diversity even faster than we’re destroying the planet. Yet that diversity could be key to surviving environmental extremes.

We are a young, genetically homogenous species. For survival, we rely on a staggering diversity of cultures.

Within 100 years, many of our cities will become uninhabitable, submerged under oceans or deadly hot. Food will be more difficult to grow. Storms will become more violent. The gentle planet we’ve known will be no more.

That’s hard to wrap one’s brain around. Some turn to faith, others despair.

I turned to anthropology, and found that the prevailing thinking on humans’ knack for survival has changed since my intro class. Scientists are no longer as impressed with individual human cleverness. Many animals, from macaws to chimpanzees to otters, are adept at innovative problem-solving.

Instead, a growing school of evolutionary biology believes that our ability to adapt to climates, from the Arctic to the Sahara, is because of our cultural diversity and ability to pass on detailed knowledge for generations. Anthropologist Joseph Henrich observes:

Surviving in this immense diversity of habitats depended not on specific genetic adaptations, but on large bodies of culturally transmitted know-how, abilities and skills that no single individual could figure out in his or her lifetime (e.g., blowguns, animal tracking). Many an explorer has perished in supposedly 'harsh' environments in which local adolescents would have easily survived.

We are a young, genetically homogenous species. Where others rely on genetic diversity for survival, we rely on a staggering diversity of cultures.

Or we used to. “Capitalist economies that stress on nonstop economic growth … are paving the way to the homogenization of cultures and landscapes,” warned 13 biologists and researchers in the journal Conservation & Society in 2009. Land grabs, efforts to “modernize” indigenous ways of life, consumerism and urbanization, among other forces, are driving a cultural die-off. One rough proxy is language: Of Earth’s roughly 7,000 languages, one becomes extinct every other week.

That loss threatens not only “the capacity of human systems to adapt to change,” the Conservation & Society writers warn, but ecosystems as a whole. Numerous studies have linked linguistic diversity and biodiversity. Lose local languages, and you lose local species.

That is likely because the vanishing languages and cultures belong to indigenous peoples. “Land is revered and respected … in virtually every indigenous cosmovision,” says ecosystem and sustainability researcher Víctor M. Toledo.

“What ends up happening when we lose linguistic diversity is we lose a bunch of small groups with traditional economics,” explains Professor Larry J. Gorenflo of Penn State University, who has studied the link between linguistic and biological diversity. “Indigenous languages tend to be replaced by those associated with a modern industrial economy accompanied by other changes such as the introduction of chain saws. In terms of biodiversity conservation, all bets are off.”

Indigenous peoples have served as the Earth’s staunchest environmental stewards in the face of 500 years of violent colonialist encroachment. According to Global Witness, more than 50 indigenous defenders of the land were murdered in 2017 alone. The 22 percent of the world’s land indigenous people occupy holds 80 percent of its species, as well as swaths of forest that represent a last bulwark against climate change.

To me, this suggests that rather than trust in individual cleverness to mitigate climate change, we might draw on our remaining cultural diversity and turn to indigenous peoples for leadership.

I’m not alone. The U.N. and even the World Bank have recommended centering indigenous peoples in climate planning. A 2016 report by the Obama administration’s USDA suggested that the U.S. look to its 562 tribal nations: “It is detrimental for the federal government to exclude tribes in climate-change initiatives because long histories of adaptation in response to colonialism, genocide, forced relocation and climatic events have provided tribes with extensive experience with resistance, resilience and adaptation.”

What’s more, indigenous people can offer “an ethical framework for adaptation plans.” The report quotes Terry Williams, of the Tulalip Tribes Natural Resources Department: “We were taught that we’re the caretakers of the land. I tell our people that, if nothing else, we can set the example.”

Or, as new U.S. Rep. Deb Haaland (D-N.M.), of the Laguna Pueblo, puts it: “Our cultural practices take into deep regard the harmony that must exist between people and the land—if we are to sustain ourselves and create such a path for future generations.”