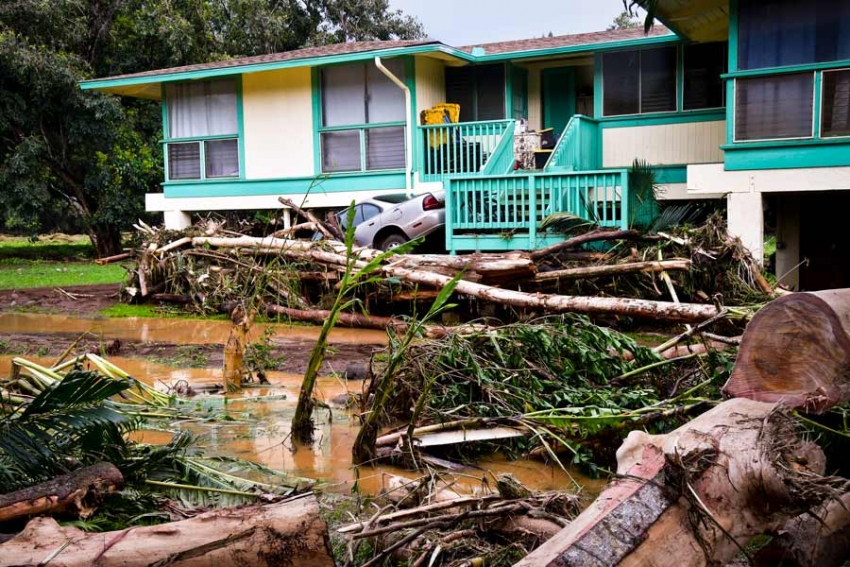 As seas rise, middle- and working-class Hawaiians worry they’ll be forced out of their homes, while the rich rebuild.

Hawaiians are deeply attached to their coastal homes, and being forced to abandon them is a difficult prospect.

On April 15, 2018, nearly 50 inches of rain fell on Hanalei, a small town on the north shore of Kauai, Hawai‘i, the heaviest 24-hour rainfall in U.S. history. It caused a historic flood that stranded hundreds in evacuation centers as water seeped into the foundations of beachfront properties and multimillion-dollar homes plummeted into the ocean.

The people who live in Hanalei are generally wealthy enough to rebuild farther inland, but the people who travel to work in the town—like service industry workers—were cut off. For months, a one-lane road open only to residents and nongovernmental workers was the sole way in and out of town, causing massive backups. Tourists were turned away, devastating many local businesses that rely on tourism.

That storm, and the fact that most Hawaiians live along the coast of the low-lying islands, have sparked a statewide reckoning with climate change. Hawaiians are being forced to decide whether to rebuild in place or abandon their shorelines.

“In the last 48 years I’ve been here, [I thought the land these homes were built on was] part of the earth,” says Joel Guy, president of the Hanalei-to-Ha’ena Community Association. “And now you’re like, whoa, that was just a sandbar that got wiped out by this massive flood.”

According to a 2017 report by the Hawai‘i Climate Change Mitigation and Adaptation Commission, more than 6,500 structures are at risk of being underwater by the end of the century, assuming a fairly conservative estimate of only a 3.2-foot rise in sea levels.

In February, the Hawaiian Office of Planning, Coastal Zone Management Program released a report on “managed retreat,” a growing, yet controversial, response to climate change that asks what circumstances should prompt an organized abandonment of the coast, parts of which will soon be uninhabitable. Currently, the most common way to mitigate rising tides is to fortify the coastline with seawalls.

Both seawalls and retreating inland have significant drawbacks. Putting up seawalls can erode the state’s beaches into nonexistence, and because beaches are a public buffer between the coast and private homes, their erosion means less public space. Beaches are a point of pride for residents, too, and a draw for the tourists who drive the state’s economy. But Hawaiians are also deeply attached to their coastal homes, and being forced to abandon them is a difficult prospect.

Hawaiian officials are now wrestling to define what, exactly, a just version of managed retreat might look like. The state attorney general reaffirmed the opinion that, as the seas rise, any private land that falls beneath the tides becomes public, essentially deputizing the ocean to expropriate private property and forcing private landowners to give more serious consideration to relocating sooner than later. Drawing on a small but growing number of academic studies, the February report noted that managed retreat has a higher likelihood of actually happening if it’s done democratically and is initiated by the community, rather than forced upon it.

But middle- and working-class communities along the islands’ coasts worry that rich communities will continue to be fortified with seawalls while everyone else will be forced to move.

“Infrastructure is always repaired in the wealthier areas,” notes Sandy Ma, the lead author of the February report. “There is a concern that managed retreat will be used in a way that will disproportionately benefit people of means, initially. … We want to be sure that social justice concerns are examined and [that] climate change does not further negatively impact [disadvantaged communities].”

While still a largely unpopular solution, managed retreat has been implemented a handful of times in the United States. On Staten Island, in the aftermath of Hurricane Sandy in 2013 (and in spite of then-Mayor Michael Bloomberg’s calls to rebuild in place), New York state bought out an entire neighborhood along the island’s eastern shore—at pre-storm home valuations, after the community asked the state to help them retreat from the coast.

Two native communities in the United States won federal grant money in 2016 to allow them to buy new land and move their entire communities inland: One is relocating from Isle de Jean Charles, La., a small island that has lost 98 percent of its land in the last 60 years; the other is a coastal village in Newtok, Alaska, which had been trying to fund a relocation since 1994.

Perhaps nowhere in the country is local government taking retreat as seriously as in Hawai‘i. One proposal, currently stalled in the state legislature, would help homeowners along the coast refinance mortgages on new inland property. Another proposal promotes retreat where feasible, and identifies higher ground to create new public developments.

Still, Hawaiians aren’t convinced retreat is wise. “Don’t manage a retreat; manage oceanfront preservation,” says Richard Sterman, who lives on Oahu’s north shore. Though Sterman recently lost 10 feet of his yard to encroaching seas, he argues that fortification can prevent damage and keep him in place.

Unfortunately, as the seas rise, that may not be an option for much longer.