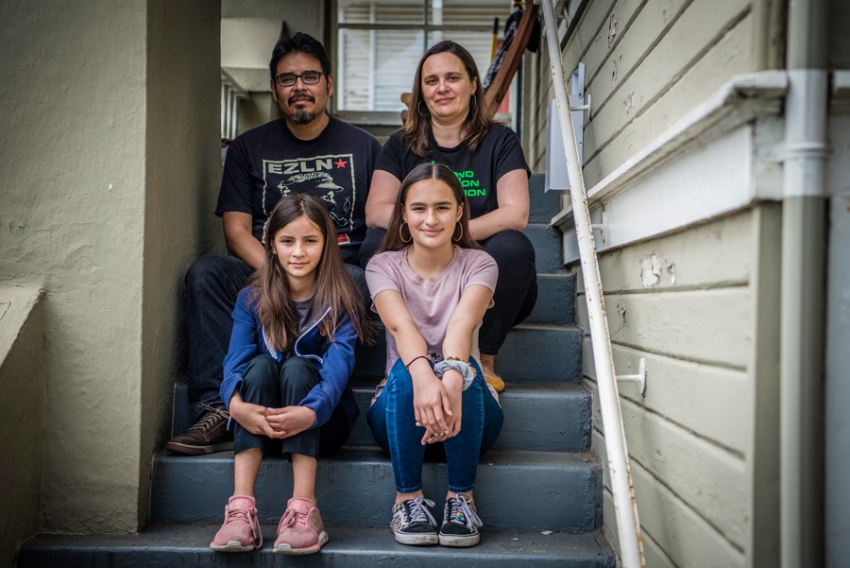 Union Teachers Are Donating Their Stimulus Checks to the Undocumented

Undocumented workers are excluded from unemployment protections and stimulus checks, but not from union solidarity.

OAKLAND, Calif.—Olivia Udovic and her husband, Edgar Sánchez—both teachers in Oakland—are among millions of Americans receiving federal stimulus checks. The money didn’t stay in their bank account for long, however; the pair is part of a nationwide movement of teachers paying their checks forward to undocumented families in their schools.

The $2.2 trillion federal Covid-19 stimulus package provides $1,200 to taxpayers bringing home less than $75,000 a year (plus $500 per child) and expands unemployment benefits. But undocumented workers are excluded from both provisions, despite collectively paying billions in taxes. California created its own $125 million coronavirus disaster relief fund to provide $500 in cash to some 250,000 undocumented immigrants in the state—a little less than 15% of the undocumented workforce. For many, that won’t fill the gap.

So Udovic and other members of her union, the Oakland Education Association (OEA), organized teachers to pledge their stimulus checks to Centro Legal de la Raza’s Oakland Undocumented Relief (OUR) Fund. The fund provides $500 checks or pre-paid debit cards to each family—an important consideration for many undocumented people who do not have bank accounts. According to Udovic, as of April 20, 33 teachers have pledged more than $16,000.

Henry Sales is a leader in Oakland’s Mam community, many of whom arrived from Guatemala without papers. “Many Mam people have come to the U.S. to work as day laborers, or they are selling fruit on the street,” Sales says. “They tell me, ‘If I can’t work, how will I care for my family, pay electricity, rent, food?’”

Oakland teachers are not alone. Frank Lara teaches fifth grade at Buena Vista Horace Mann K-8 Community School, a dual-language Spanish immersion school in San Francisco. While Lara transitioned to online classes, he was also talking to his undocumented neighbors in the Mission District. The heavily Latino neighborhood is home to many essential workers and has been hard-hit by the virus.

“It became apparent that undocumented folks who are holding the entire U.S. economy together would be sidelined,” Lara says. “Thanks to the strength of the union, we’ve maintained full-time jobs and benefits. Because we’re in that privileged position, people wanted to give. We said, ‘Let’s do it collectively.’”

Lara’s union, the United Educators of San Francisco, organized to give to UndocuFund SF—with 340 teachers pledging more than $115,000 so far.

“We’re not rolling in the dough,” Lane says. “But I get to stay home while my students’ parents work dangerous jobs or have been laid off. If I have that privilege, how do I help? Giving my check is not a sacrifice, it’s a necessity. We’re supposed to take care of each other.”

Back in Oakland, Udovic credits her union’s support in part to its increased emphasis on rank-and-file leaders. OEA’s historic weeklong 2019 strike trained hundreds of teachers to become union activists. “Many people doing the work today didn’t know how to participate before the strike,” Udovic says.

“The community coalition and relationships with parents that we built during the strike helped us be in a position during the Covid pandemic to rapidly address the needs of our families,” says OEA President Keith Brown.

For many unions, this moment is not just about providing immediate mutual aid to students’ families, but backing broader community demands.

“Just like in the strike, we do this for the families,” Lane says. “I’m proud of my union for promoting equity across Chicago by signing onto the Right to Recovery for all Chicagoans.” The Right to Recovery is a “common good” platform, put forward by dozens of labor and community organizations with many local and state elected officials, calling for paid time off, free Covid-19 testing and a moratorium on evictions, mortgage payments and utility shutoffs.

In Oakland, Udovic says, “The OEA is voting to be in solidarity with the rent strikes,” referring to the movement of tenants withholding rent and calling for its cancellation, given they cannot earn income while sheltering in place.

Lara emphasizes that the political climate necessitates unions help their communities as a whole. “We should see this as the trajectory of the union,” he says. “We’re one with the communities we serve. Without the support of those communities, we can’t win broader, radical reforms in public education.”

Brooke Anderson is an organizer and photojournalist based in Oakland, Calif.