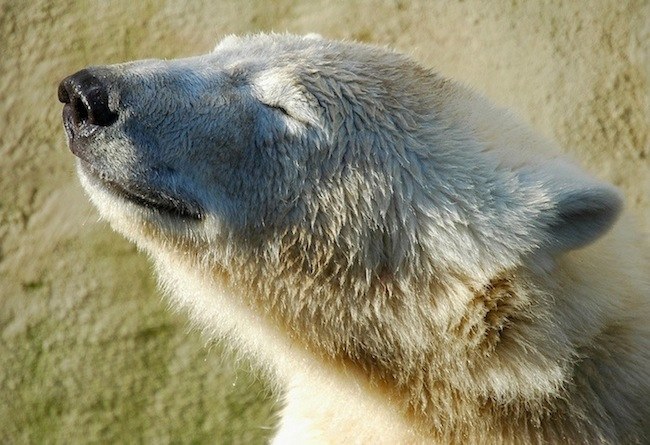 Polar bears aren't the only species threatened with extinction by climate change. We are, too. (Marieke IJsendoorn-Kuijpers / Flickr / Creative Commons)

Issues that Obama and Romney Avoid

The presidential candidates aren’t so keen on addressing the survival of humanity.

In a rare instance of bipartisanship, both parties demand that we make the problem of global warming worse.

With the quadrennial presidential election extravaganza reaching its peak, it's useful to ask how the political campaigns are dealing with the most crucial issues we face. The simple answer is: badly, or not at all.

There are two issues of overwhelming significance, because the fate of the species is at stake: environmental disaster and nuclear war.

The former is regularly on the front pages. On September 19, for example, Justin Gillis reported in The New York Times that the melting of Arctic sea ice had ended for the year, “but not before demolishing the previous record – and setting off new warnings about the rapid pace of change in the region.”

The melting is much faster than predicted by sophisticated computer models and the most recent U.N. report on global warming. New data indicate that summer ice might be gone by 2020, with severe consequences. Previous estimates had summer ice disappearing by 2050.

“But governments have not responded to the change with any greater urgency about limiting greenhouse emissions,” Gillis writes. “To the contrary, their main response has been to plan for exploitation of newly accessible minerals in the Arctic, including drilling for more oil” –that is, to accelerate the catastrophe.

This reaction demonstrates an extraordinary willingness to sacrifice the lives of our children and grandchildren for short-term gain. Or, perhaps, an equally remarkable willingness to shut our eyes so as not to see the impending peril.

That's hardly all. A new study from the Climate Vulnerability Monitor has found that “climate change caused by global warming is slowing down world economic output by 1.6 percent a year and will lead to a doubling of costs in the next two decades.” The study was widely reported elsewhere but Americans have been spared the disturbing news.

The official Democratic and Republican platforms on climate matters are reviewed in Science magazine's September 14 issue. In a rare instance of bipartisanship, both parties demand that we make the problem worse.

In 2008, both party platforms had devoted some attention to how the government should address climate change. Today, the issue has almost disappeared from the Republican platform–which does, however, demand that Congress “take quick action” to prevent the Environmental Protection Agency, established by former Republican President Richard Nixon in saner days, from regulating greenhouse gases. And we must open Alaska's Arctic refuge to drilling to take “advantage of all our American God-given resources.” We cannot disobey the Lord, after all.

The platform also states that “We must restore scientific integrity to our public research institutions and remove political incentives from publicly funded research” –code words for climate science.

The Republican candidate Mitt Romney, seeking to escape from the stigma of what he understood a few years ago about climate change, has declared that there is no scientific consensus, so we should support more debate and investigation–but not action, except to make the problems more serious.

The Democrats mention in their platform that there is a problem, and recommend that we should work “toward an agreement to set emissions limits in unison with other emerging powers.” But that's about it.

President Barack Obama has emphasized that we must gain 100 years of energy independence by exploiting fracking and other new technologies–without asking what the world would look like after a century of such practices.

So there are differences between the parties: about how enthusiastically the lemmings should march toward the cliff.

The second major issue, nuclear war, is also on the front pages every day, but in a way that would astound a Martian observing the strange doings on Earth.

Unlike Iran, Israel refuses to allow inspections or to sign the Treaty on the Non-Proliferation of Nuclear Weapons (NPT). It has hundreds of nuclear weapons and advanced delivery systems, and a long record of violence, aggression and lawlessness, thanks to unremitting American support. Whether Iran is seeking to develop nuclear weapons, U.S. intelligence doesn't know.

In its latest report [PDF], the International Atomic Energy Agency says that it cannot demonstrate “the absence of undeclared nuclear material and activities in Iran” –a roundabout way of condemning Iran, as the U.S. demands, while conceding that the agency can add nothing to the conclusions of U.S. intelligence.

Therefore Iran must be denied the right to enrich uranium that is guaranteed by the NPT, and endorsed by most of the world, including the nonaligned countries that have just met in Tehran.

The possibility that Iran might develop nuclear weapons arises in the electoral campaign. (The fact that Israel already has them does not.) Two positions are counterposed: Should the U.S. declare that it will attack if Iran reaches the capability to develop nuclear weapons, which dozens of countries enjoy? Or should Washington keep the “red line” more indefinite?

The latter position is that of the White House; the former is demanded by Israeli hawks–and accepted by the U.S. Congress. The Senate just voted 90-1 to support the Israeli position.

Missing from the debate is the obvious way to mitigate or end whatever threat Iran might be believed to pose: Establish a nuclear weapons-free zone in the region. The opportunity is readily available: An international conference is to convene in a few months to pursue this objective, supported by almost the entire world, including a majority of Israelis.

The government of Israel, however, has announced that it will not participate until there is a general peace agreement in the region, which is unattainable as long as Israel persists in its illegal activities in the occupied Palestinian territories. Washington keeps to the same position, and insists that Israel must be excluded from any such regional agreement.

We could be moving toward a devastating war, possibly even nuclear. Straightforward ways exist to overcome this threat, but they will not be taken unless there is large-scale public activism demanding that the opportunity be pursued. This in turn is highly unlikely as long as these matters remain off the agenda, not just in the electoral circus, but in the media and larger national debate.

Elections are run by the public relations industry. Its primary task is commercial advertising, which is designed to undermine markets by creating uninformed consumers who will make irrational choices – the exact opposite of how markets are supposed to work, but certainly familiar to anyone who has watched television.

It's only natural that when enlisted to run elections, the industry would adopt the same procedures in the interests of the paymasters, who certainly don't want to see informed citizens making rational choices.

The victims, however, do not have to obey, in either case. Passivity may be the easy course, but it is hardly the honorable one.