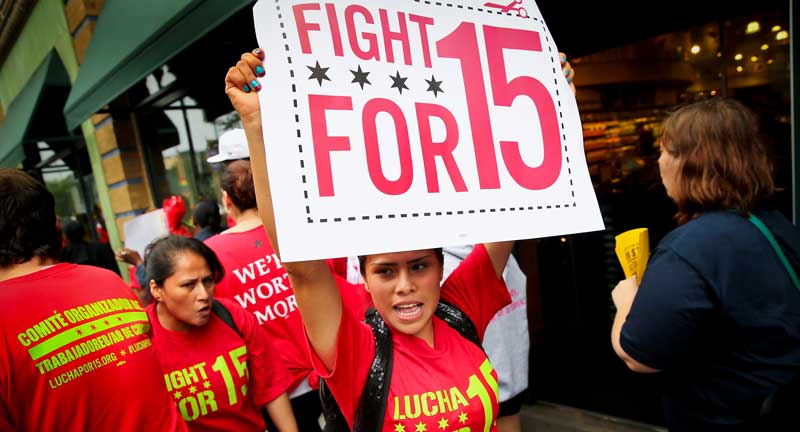 A hard look at the campaign by retail and fast-food workers to earn a living wage.

'This is a historic moment, and I think when people look back, they're going to say we did something amazing that no one believed we could do.'

In August, fast food workers in 58 cities walked off the job—a dramatic escalation of a campaign for a $15-per-hour wage that has tapped into a latent anger among low-wage workers, whose economic precariousness at a time of record corporate profits has led to strikes, a tactic long thought out of style.

As Occupy Wall Street did in 2011, strikers have focused the national narrative on the appalling inequality of 21st century America and the evaporation of well-paying jobs with benefits. But as the campaign—backed by the Service Employees International Union (SEIU)—has advanced, some in labor have worried that the strikes focus entirely on shifting the narrative around low-wage work while giving long-term organizing among low-wage workers themselves short shrift.

To discuss the campaign, In These Times turned to Peter Olney, organizing director of the International Longshore and Warehouse Union, and a former SEIU organizer; Jane McAlevey, former SEIU national deputy director of strategic campaigns and SEIU Nevada ex- ecutive director, who chronicled her experiences in Raising Expectations (And Raising Hell): My Decade Fighting for the Labor Movement (Verso); and Trish Kahle, a worker at Whole Foods and a member of the SEIU-backed Workers Organizing Committee of Chicago, a new union that is leading the Fight for 15 campaign. Representatives of SEIU were invited to participate in this discussion, but declined.

What has the campaign accomplished so far?

Trish: We had been trying to organize at Whole Foods for at least five months in Chicago, but no unions thought it was worth investing in a campaign. Fight for 15 gave us resources to actually organize at work. After the April 24 strike, the organizers at our store and many other stores got raises—I got a $1.50 raise and other people got small promotions. We also got management to agree to a new attendance policy. And now we actually have a water cooler and a place where we can take breaks. Fight for 15 is giving people an idea of how organizing works.

Jane: Any time we’re talking about inequality nationally, it’s a good thing. Many people have long argued that the labor movement needs to act on behalf of the entire working class. SEIU is doing that here.

Some say Fight for 15 is little more than a PR campaign—do you agree?

Trish: Among organizers, the campaign’s purpose is debated. For example, on August 29, staff were making sure as many cities struck as possible, regardless of the level of organization—rather than actually organizing and exerting more power in certain workplaces. At the same time, the “minority strike” has brought a lot of organizing into the open. That has to translate into deepening the organizing and developing rank-and-file leaders.

Peter: At the Bay Area August 29 rally, there was a huge turnout of supporters, but a negligible number of fast-food workers. An organizer told me that 72 workers were present at a meeting to authorize a strike in 40 fast-food outlets and that about 40 workers walked. The action got tremendous press, but I’m concerned about actual participation by workers and what kind of organization is built in the long run.

Trish: The organization is extremely uneven—across the country and even in Chicago. At places like Whole Foods, Subway and Dunkin Donuts, there is a high level of worker organization.

Chicago Dunkin Donuts workers’ air conditioning went off during a heat wave, and they phoned the union office and said, “We are going on strike. We put a padlock on the door. We need you to come down and support us.” That shows a level of worker driven activity that is not present at every workplace. And so the question for me is how we actually get to that level. I’m not sure the PR tactic that relies on the goodwill of politicians and community organizations is the best or most direct way.

In Chicago, half of our staff is in research, communications and outreach, and half is dedicated to turf organizing. We would want to see that shift toward more organizing in the stores.

Jane: Nationally, some of the bigger unions are trending toward advocacy work, and to me that is the wrong direction. In the last 15 years, a lot of money has been donated to PR and research. But we need money and resources devoted to teaching workers about how to use their own power—city by city, shop by shop— to win real gains.

In Salon, Josh Eidelson reported that academics and SEIU leaders have discussed two potential endgames for the campaign—reaching some kind of agreement with fast-food companies, and launching city-level campaigns to pass living-wage laws. Your reaction?

Jane: For a decade, SEIU was making top-down deals with little or no rank and-file involvement, like deals with nursing homes that exchanged unionization for a legislative push to prevent patients from suing nursing homes. Those are the kind of deals we don’t need with fast-food chains.

Not all deals are bad. But the question is, “Who’s involved in making them?” Is there actually a structure where fast food workers are significantly involved? It’s not clear from the description Peter gave of the Bay Area, or here in New York—though it may be more clear in Chicago, it sounds like from Trish— that there is a structure that involves workers in making smart decisions.

Trish: I think the legislative approach would be too fast-track. We need some sort of city-wide organization, where, for example, every organized fast-food store could be covered by the same contract. And any sort of deal we get has to include the right to strike. With the wide variation among shops, that’s really the only way for us to be able to effectively enforce a deal.

What specific challenges does organizing the fast-food sector pose?

Peter: Unlike SEIU’s previous victories with janitors—where the union already had a mighty fortress of organized commercial janitor locals in NY, Chicago and SF as a base to organize from—and with homecare workers— where you had public financing and could mobilize public power—in Wal-Mart, or the fast food industry, you’re starting with a blank slate and doing pure private-sector organizing.

That will require a long-term commitment of resources, and particularly a commitment of creative and bright organizers like Trish who are willing to dedicate their lives to building power from the bottom up, and creating networks across a city and a region. The organization of the West Coast Waterfront took at least 12 years of organizing by Harry Bridges and others. It involved failed strikes and failed organizing drives, but culminated in 1934 with the West Coast waterfront strike and the general strike in San Francisco. And that required incredible fortitude.

Jane: We still have 14 million union members in this country. A more strategic approach to this would be a relational model, where you start with your members, and you chart all the organic relationships that your members have, and you begin with the workers themselves building off of existing social networks.

Peter: Workers are walking out on strike and going back to work with impunity, at least initially. But then what we’re seeing on the Wal-Mart campaign, and certainly we’ll see it in the fast food campaign, is firings six months later for absenteeism or some other trumped-up infraction. How can we defend these workers? And how do we prevent a chilling effect on the rest of the workforce if we don’t have the organization necessary to defend the fired workers?

Jane: Anything that encourages direct action is good. It’d be good if other unions were at least attempting new stuff like SEIU is currently doing. If organizers in every city, every region, every part of the country put their heads together, there could be a strategy to work together with the existing rank- and-file membership and go for power.

Trish: What Fight for 15 has taught us is that if we fight we can win. We already started making gains at work. We’ve united when no one thought we could. So if any low wage workers see this, I would encourage them to join us. The more united we are, the stronger we are. This is a historic moment, and I think when people look back, they’re going to say we did something amazing that no one believed we could do.