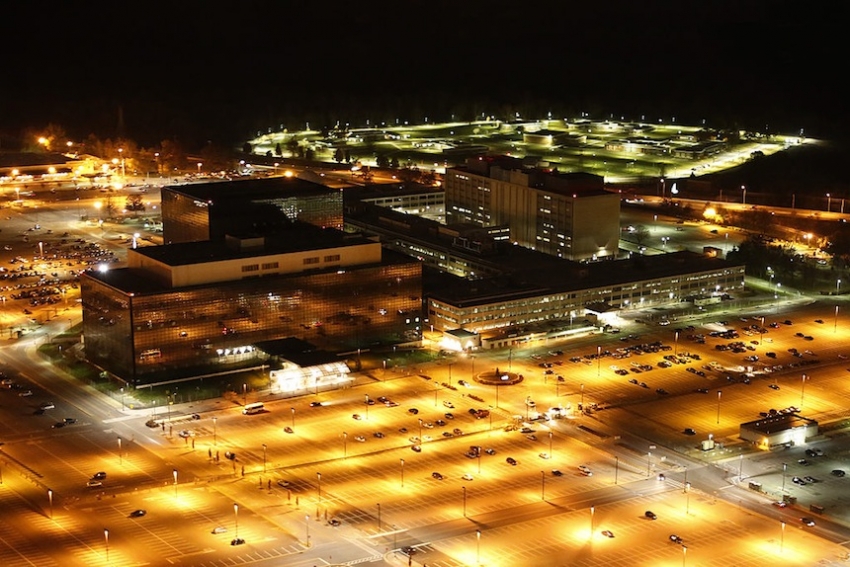 An aerial view of the NSA's headquarters in Forte Mead, Md. offers a glimpse of how much electricity the agency uses. Civil liberties advocates want to leverage that usage to stop domestic surveillance. (Trevor Paglen / Wikimedia Commons)

Cutting Power to the NSA

A civil liberties coalition wants to nullify the NSA, one lightbulb at a time.

The NSA has facilities around the country that collect, analyze and store data for counterintelligence and military purposes—and those facilities depend on water and electricity supplied by state and local governments.

A new group of civil liberties advocates wants to turn the lights off on the National Security Agency (NSA)—literally. OffNow, an eclectic coalition of 11 non-partisan organizations ranging from libertarian groups to the Muslim Legal Fund of America to the Bill of Rights Defense Committee, is taking aim at what they call the agency’s “achilles heel.” The NSA has facilities around the country that collect, analyze and store data for counterintelligence and military purposes—and those facilities depend on water and electricity supplied by state and local governments.
According to OffNow, if states and localities pass laws that restrict the agency’s access to resources, they can make it more challenging and expensive for the NSA to continue its domestic surveillance programs. In Utah, for example, the NSA’s new Utah Data Center uses a water-cooling system to keep the facility’s computers at an operational temperature. If the state cut off the water supply, the computers couldn’t run—and neither could some of the NSA’s surveillance activities in Utah.
Utah and 15 other states, including California, Michigan, and South Carolina, have introduced the 4th Amendment Protection Act, OffNow’s model state legislation. The law bans a state from providing material support—such as utilities—to NSA facilities and prohibits courts from using data obtained by the NSA without a warrant.
OffNow sees the strategy as a necessary antidote to the federal government’s failure to enact substantial NSA reforms. “Since the Snowden revelations almost a year ago, essentially nothing has changed in Washington,” says Shahid Buttar, executive director of the Bill of Rights Defense Committee and one of OffNow’s coalition partners. While Congress agonizes over about 20 different proposals for NSA reform, and the potentially years-long appeals process for federal lawsuits drags on, Buttar believes “it falls to the states to take independent action to guard the rights that the federal government continues to abuse and mask.”
The momentum continues to build as lawmakers and activists across the political spectrum embrace this powerful local solution. OffNow has already passed laws banning unwarranted cell phone tracking in Montana, Utah and Maine. Through these successes, and a social media campaign based on the hashtag #NullifyNSA, OffNow is spreading the message that individual states can step up.