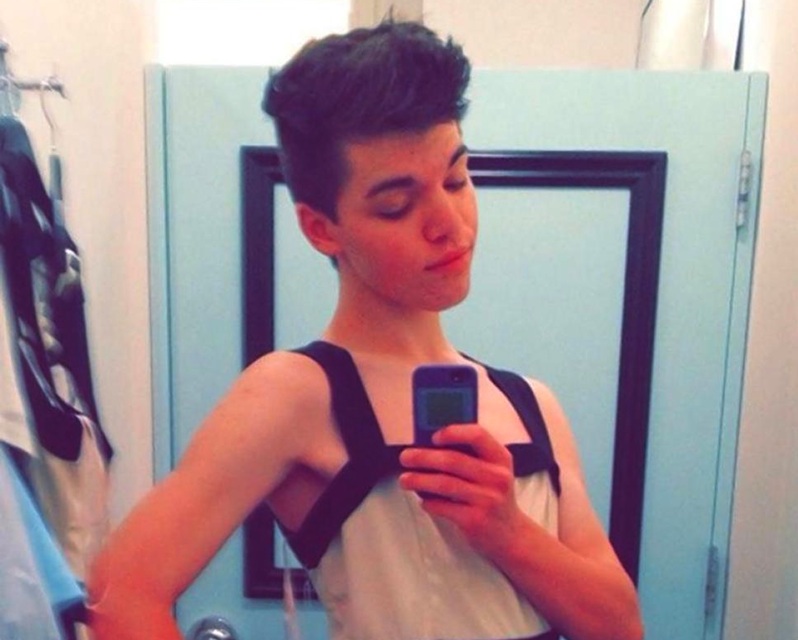 A selfie posted by Leelah Alcorn to Tumblr.

The Leelah Alcorn We Never Met

Despite her family’s best efforts, the transgender 17-year-old hasn’t been erased. But who might she have become if she had lived?

We’re mourning Leelah Alcorn, but in a way, we’re also mourning all of the girls we never got to know, the girls who were cast as dark secrets and rendered invisible to history.

We should have met Leelah Alcorn differently. All the evidence seems to suggest that we would have, eventually: The 17-year-old Ohio girl who committed suicide on December 28 by walking in front of a semi truck on the highway was, among other things, immensely gifted.

She was a writer, and a good one; she could pack complicated ideas into conversational prose without sacrificing either integrity or impact. She had the ability—even under adverse circumstances, even while enduring great personal agony—to craft incisive and compelling critiques of the society in which she lived and how its institutions had failed her. She was also an artist, and a working one: She had a job drawing caricatures at an amusement park. It wasn't a glamorous start, but it was a start, and she could have—probably would have—done much more.

The furor around Alcorn’s death is still rising. This is partly due to the fact that we have two accounts of it: first, Alcorn’s own suicide note. Then, her mother’s account, which differs in every imaginable detail.

“My sweet 16 year old son, Joshua Ryan Alcorn went home to heaven this morning,” Carla Alcorn posted on her Facebook, in a post that has since been taken down. “He went out for an early morning walk and was hit by a truck.”

In another era, that might have been the end of it. But Leelah had queued up a suicide note, to be published on her Tumblr in the event of her death. This is the note that’s been circulating through social media, fueling the outrage and grief around Alcorn’s death.

“When I was 14, I learned what transgender meant and cried of happiness,” Leelah Alcorn wrote. “After 10 years of confusion I finally understood who I was. I immediately told my mom, and she reacted extremely negatively, telling me that it was a phase, that I would never truly be a girl, that God doesn’t make mistakes, that I am wrong.” Her parents “started taking me to a therapist, but would only take me to christian therapists, (who were all very biased) so I never actually got the therapy I needed to cure me of my depression.” She says they also took her out of school and cut off her social media access after she tried testing the waters at school by telling friends she was “gay.”

Leelah Alcorn also posted on Reddit, and one of those posts paints an even more disturbing picture: Alcorn asked if she was being abused.

“They never physically hurt me,” she wrote, “but they always talked to me in a very derogatory tone. They would say things like ‘You'll never be a real girl’ or ‘What're you going to do, fuck boys?’ or ‘God's going to send you straight to hell’. These all made me feel awful about myself, I was christian at the time so I thought that God hated me and that I didn't deserve to be alive. I cut myself at least once every couple days, and I was constantly thinking about suicide. … I’m not physically beaten or hit, but I feel like this is a different kind of abuse, maybe mental or verbal or something.”

Well, first of all: If this is true, then yes, Leelah Alcorn was being abused. Abuse happens when someone is systematically controlled, demeaned and harmed by the people they trust to care for them: Leelah Alcorn was experiencing all three of those things. That doesn’t mean, as some have alleged, that her parents “killed” her. It’s unfair and incorrect to say that any one person can “make” a young woman with depression kill herself. Suicide is the lethal outcome of a lethal illness. Leelah Alcorn didn’t get the right medical treatment, and so she died.

But it was her parents who were responsible for getting her that medical treatment, which almost certainly would have included gender reassignment. Gender dysphoria—the tremendous discomfort and unhappiness felt by trans people who aren’t able to live as their true gender—is a huge risk factor for depression and suicide. Transgender teens attempt suicide at a rate that is staggeringly high, compared to the general population. According to the Youth Suicide Prevention Project, 10 percent of all teenagers attempt suicide, but 50 percent of transgender youth attempt suicide before their twentieth birthdays. Keeping Leelah Alcorn safe and healthy inevitably would have meant helping her to transition into life as a girl; or, as some doctors now recommend, helping her get hormone therapy to delay puberty until she was old enough to make the transition herself. (Alcorn was afraid that if she waited too long, she’d look too “masculine” to transition effectively.) Denying her the treatment was negligent, under any circumstances. Piling shame or cruelty onto medical neglect, while she was already fragile, would be unconscionable.

Still, shaming the people who raised Leelah Alcorn—or threatening them, as some have allegedly done—won’t necessarily fix the situation for the thousands or millions of girls just like her, who need to find their way into adulthood and a safe transition. And it was those people Alcorn wanted to help: “The only way I will rest in peace is if one day transgender people aren’t treated the way I was, they’re treated like humans, with valid feelings and human rights,” she wrote.

One of the saddest ironies of the situation is this: In a way, the fact that we know Leelah Alcorn’s name and why she died, points to the existence of the communities that might save other girls like her. Everything about her story—from her parents denying her medical treatment and cutting her off from social media, to Carla Alcorn’s announcement about the death of her “son,” which seemed to imply it was accidental—points to the need of Leelah’s parents to control the narrative of who their child was. In another era, before social media, this might have worked. We don’t know how many children died in “tragic accidents” or unspecified circumstances and were eulogized with the wrong names and pronouns. We don’t know how many girls and boys lived and died invisibly, erased by families who couldn’t bring themselves to admit who their children were.

That didn’t happen this time. We got to hear from Leelah Alcorn, in her own words, about who she was and what she suffered. Social media was able to share her message, re-blog her last words thousands of times, and rally around her last wishes, with hashtags like #LeelahAlcorn and #RealLiveTransAdult (trans adults testifying that a happy transition and adulthood are possible) trending on the week of her death. When Leelah Alcorn’s Tumblr was taken down—likely by her parents, in what feels like one more denial of her voice and identity—people on Tumblr immediately located an archived version of her words. We’re mourning Leelah Alcorn, but in a way, we’re also mourning all of the girls we never got to know, the girls who were cast as dark secrets and rendered invisible to history. It’s only now, in the 21st century, that we can see such a girl’s face, hear her voice, and get some sense of the person we’ve lost.

The ability to make one’s voice heard is not a cure-all. Young trans women—and all transgender people—still have to deal with the erasure of their identities, along with transphobic discrimination and violence. But Leelah Alcorn, despite her family’s best efforts, has not been erased. We won’t remember her as a young man. We’ll remember her under the name she chose.

It’s important not to glamorize suicide by casting those who’ve died as tragic heroines or to send the message that killing yourself is a way to make people appreciate you. Leelah Alcorn was infinitely valuable to the planet, for reasons other than the circumstances of her death; she would have had more impact if she had lived longer. Had she lived, we might have remembered her for so much more: for her art, for her writing, for her advocacy, for her memoir about growing up in a repressive family or her Congressional campaign. We should have met her differently. But one only hopes some of the young trans women out there are seeing that the world valued her voice, and that she had the tools to make herself heard and find her community before her parents took them away from her—and that they’ll start using those tools for all they’re worth, and find the support and strength they need to survive. Those girls are necessary to the world. We need to meet them, too.