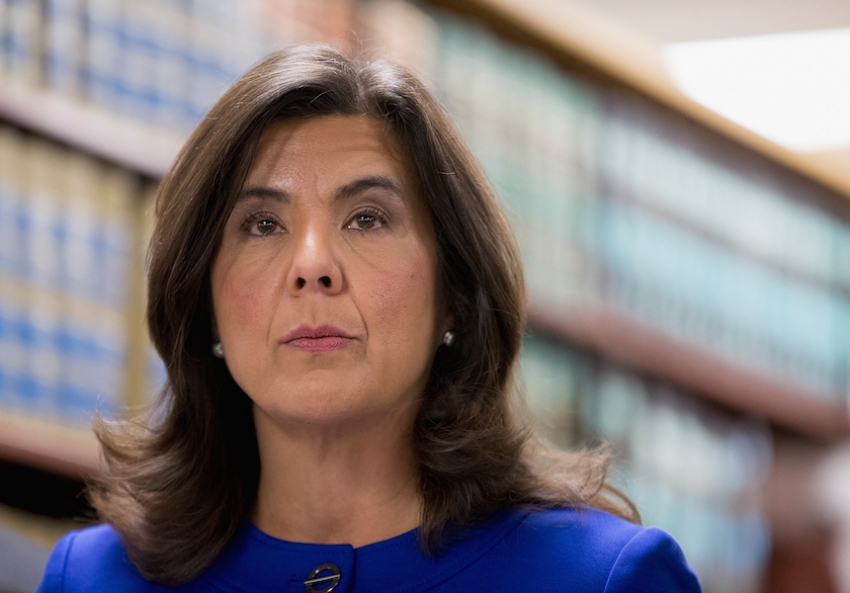 Alvarez’s office had to drop dozens of charges the officer brought. Why didn’t she prosecute him?

Alvarez has allowed officers accused of wrongdoing to wriggle free, while at the same time fervently prosecuting civilians accused of much lesser crimes.

During the contest for Cook County state’s attorney, which has seen embattled incumbent Anita Alvarez’s record of fealty to the Chicago Police Department come under the microscope, one man’s name seems to have been all but forgotten amidst the list of cases where Alvarez has allegedly allowed dishonest police officers to escape charges: Richard Fiorito.

But not everyone has forgotten. James Dean, Jr., still remembers his encounter with the corrupt officer that resulted in a years-long fight to clear his name over a trumped-up DUI charge.

It was in February 2007 that Dean had his run-in with Fiorito, a then-nine-year Chicago police veteran who wound up resigning in disgrace in 2011. Dean, who had been arrested earlier in the day for driving on a suspended license, had been released without charges and warned not to drive again. His car, however, was impounded and brought to the Town Hall police district in the Lakeview neighborhood. Dean says he was ready to return to home, but he then remembered that he had left his cell phone in his car. He got permission from the sergeant on duty to retrieve it.

As he was walking away from the car in the police station parking lot after getting his cell phone, Dean says he was accosted by an aggressive and belligerent Fiorito, who told him he couldn’t park where he was and demanded he move the car. Dean says he tried explaining to Fiorito that he hadn’t been responsible for the car’s location, but seeing there was no arguing with the police officer, who he says was “yelling and screaming,” he decided to comply. After moving the car to what he thought was a legal parking space, Dean says Fiorito came up behind him in his vehicle, switched on his police lights and continued to berate him.

“I just really thought at this point I was in the Twilight Zone,” says Dean. (Fiorito died in 2014.)

Not long after that, and only four minutes after leaving the police station, Dean says he was slapped with 17 tickets and a DUI charge by Fiorito—even though he had just been released by police and there had been no alcohol involved at any point.

“From there, my life changed irreparably,” says Dean.

What Dean didn’t know at the time was that his case wasn’t unique. In fact, his encounter was very similar to what Fiorito had done to many other Chicagoans. It soon came out that Fiorito had been arresting people on false DUI charges for six years as part of what critics believed was a scheme to gain overtime pay for court appearances.

It typically went like this: Fiorito would stop drivers, usually in the Lakeview area, on suspicion of driving drunk. He would then—though not always—conduct a sobriety test on the driver. Regardless of how they performed, Fiorito would record them as failing and charge them with a DUI, often making up details about their drunk driving. The accused, eager to avoid a DUI on their record, would enter a plea bargain and plead guilty to lesser charges.

Fiorito’s actions had the additional ignominy of being tinged with homophobia. Because he worked in Chicago’s “Boystown” neighborhood, a large share of Fiorito’s victims were in the LGBT community, and many accused him of using homophobic slurs while arresting them.

Between January 1, 2007 and June 6, 2008, Fiorito made a whopping 313 DUI arrests; in 2006, he made 230. Given that police officers typically work a 40-hour week, Fiorito was operating at a rate of nearly one DUI arrest per day. For this seemingly zealous devotion to keeping Chicago’s streets free of drunk drivers, Fiorito was honored by both Mothers Against Drunk Driving and the Alliance Against Intoxicated Motorists, which named him a “top cop.”

Fiorito was eventually taken off the streets and put on desk duty after dash cam footage emerged in 2009 contradicting Fiorito’s own police report about a different DUI charge. By the time he resigned, Fiorito stood accused of fabricating at least 40 DUI charges, and the Cook County state’s attorney’s office had to drop charges against more than 130 motorists arrested for drunk driving by Fiorito.

Dean was one of two drivers who refused to take the plea bargain and fought the DUI charge to the very end, maintaining he’d done nothing wrong. He eventually won $175,000 in damages from the city, as well as the cost of his legal fees. The other driver was Steve Lopez, a truck driver for whom a DUI could have been a career-killer.

“She’s not on the right side of the law”

The case is worth remembering now as Cook County state’s attorney Anita Alvarez fights for her political life. One of the chief criticisms lobbed at Alvarez by her opponents is her hesitancy to prosecute police officers who have violated the law. In case after case, Alvarez has allowed officers accused of wrongdoing to wriggle free, while at the same time fervently prosecuting civilians accused of much lesser crimes. The Robert Fiorito episode fits squarely in this pattern.

Despite the 40 witnesses accusing Fiorito of falsifying charges, and the video footage which showed Fiorito lying about one arrest, Alvarez refused to bring any charges against him. Her office claimed at the time to have been investigating the officer for a year, but one source told ChicagoPride.com it was really closer to one month. And in fact, Fiorito had been allowed to keep working as a police officer, making arrests and testifying under oath, even as civil rights lawsuits against him piled up.

Alvarez’s Chief of Staff Dan Kirk explained to reporters at the time that the state’s attorney’s office was declining to prosecute Fiorito because a number of witnesses had “severe credibility issues,” a statement Dean viewed as “a slap in my face.”

“Anita Alvarez, she’s part of the system,” says Dean. “She certainly proved to me that she’s not on the right side of the law.”

Though Dean no longer lives in Chicago, he’s been following the state’s attorney election, and is not enthusiastic about another Alvarez term.

“If she gets re-elected, then we’re just in for more of the same corruption,” he says.

Dean adds that he feels much more hopeful about Alvarez’s opponent, Kim Foxx, a former assistant state’s attorney who has advocated that cases involving police killings be handled by an independent prosecutor unaffiliated with the state's attorney's office.

“I’m hoping that Foxx gets elected, because she understands how the system has been used against particularly people of color,” he says. “Hopefully she can be a catalyst for change.”

Cook County voters will be casting their votes for state’s attorney on March 15. As they weigh up whether or not to give Anita Alvarez one more chance, perhaps they should mull over the various second chances she’s given to officers like Robert Fiorito.