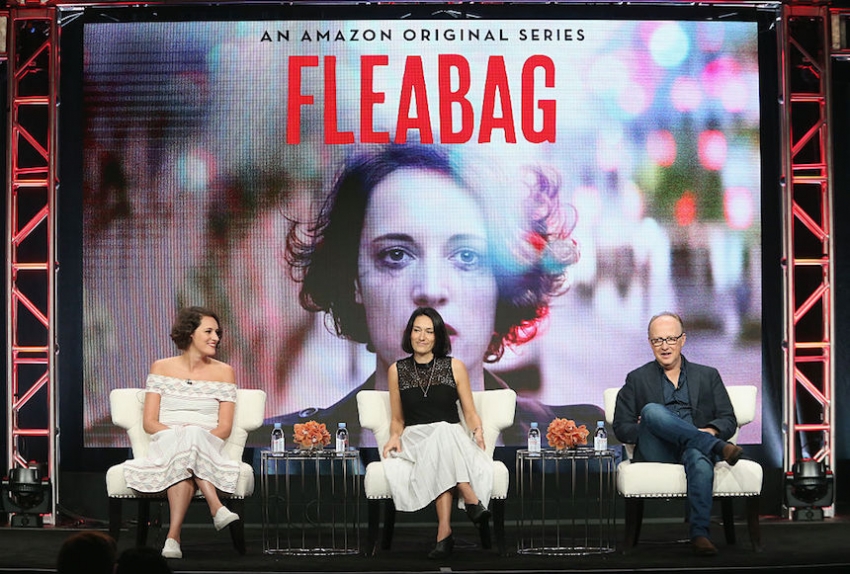 In “Fleabag,” TV Finally Gives Us a Female Anti-Hero to Love

The six-part British series shows us a self-destructive, bitter, angry young woman and trusts that we will care about her pain.

"Fleabag is willing to let a woman take the anti-hero seat, and to trust that we’ll provide her with the instant, unquestioning forgiveness we’ve supplied so many male leads."

Are we finally ready to deal with female suffering in pop culture?

It’s not that we’ve never seen women hurt before. There are plenty of varieties of female pain that are not only acceptable, but downright popular. For instance, a woman can suffer tragically in the background in order to motivate her man. This works best if she dies, or at least gets raped—then he’s really angry, and will almost definitely go on to solve the case or fight the mobsters or what have you.

Women can also suffer virtuously to demonstrate a man’s value: the all-sacrificing, saintly mother, or the wife who sheds a single tear (without fucking up her mascara) as her husband goes off to war and/or to fight Ultron. On a few occasions, we’ll even allow women to suffer without being perfect, though, again, this is most acceptable if we get to kill them for it. Think psycho-bitches Glenn Close in Fatal Attraction or Cersei Lannister on Game of Thrones, who get emotionally demolished to prove that mean women never prosper, or trainwrecks like Amy Winehouse, who become crowd-pleasing tearjerkers after their deaths.

These portrayals all have something in common: They show suffering as seen from the outside, as it exists to gratify or motivate other people, rather than an internal condition. Suffering women are plot devices, rewards or obstacles; they are unilaterally wonderful or unilaterally terrible, depending on whether they help or hinder the man at the center of the story. What they don’t get to be is the heart of their own stories, or the people whose eyes we see that story through: messy, screwed-up, complex human beings who just so happen to be in pain.

Fleabag, the six-part British series that Amazon Prime picked up after it aired on the BBC this summer, seems like a refreshing departure from that trend. The show is willing to encounter a woman’s suffering on its own terms, even when the woman in question is incapable of helping anyone, including herself.

The main character, played by creator Phoebe Waller-Bridge, is credited only as “Fleabag;” none of the other characters address her by name. She is grieving her best friend’s recent suicide, which may or may not have been accidental, and trying to save the café they opened together, which is on the verge of bankruptcy. This is heavy stuff; you could make a tearjerking indie drama out of it. Yet Fleabag herself steadfastly resists our pity.

In one of the premiere’s most-quoted lines, she refers to herself as “a greedy, perverted, selfish, apathetic, cynical, depraved, morally bankrupt woman who can’t even call herself a feminist.” She’s also self-destructive, sexually compulsive, and deeply, bitterly angry, capable of cruelty both vengeful (she steals an invaluable art piece from her father’s passive-aggressive new girlfriend) and purely gratuitous (she delights in jerking around her sad-sack boyfriend, timing their periodic breakups for whenever the house gets too dirty—he’ll wind up cleaning it while gathering his things).

But Fleabag is bleak, dark, acidic comedy even in its goofiest moments, and it never blunts the jagged edges of its main character. We see the whole thing through her eyes as she delivers first-person narration to the camera and forces us to flash back to her memories. We have to empathize with her for the show to work, and the show never tries to make her “likable.” Fleabag starts a fuck-up, and stays a fuck-up; she just happens to be a fuck-up with decent jokes.

It’s strange that this approach works—because it does work; Waller-Bridge is funny and unpredictable enough that we want to keep watching, if only to see what she’ll do next—but even stranger that someone was willing to try it. Fleabag, upon examination, is that rarest of all items: a female-driven comedy without a redemption arc. There’s no perfect guy to save her from a life of sport-fucking, no makeover montage or period of self-examination, no quest to connect with the wicked stepmother or be kinder to the dopey boyfriend, no life-altering epiphany that drags her out of the dumps. Fleabag is, simply, a story about a difficult, sad, angry, suffering woman. There is no light at the end of that woman’s tunnel; there is no path to being anyone other than herself. We cannot ask her to change into someone “better” or “more likable,” and we shouldn’t watch the show in the hopes that she’ll learn her lesson or repent for her sins. We should watch the show simply to understand who she is.

That is a staggering amount of trust to place in your audience: trust that we can tolerate and understand women’s humanity, trust that we want to understand a flawed woman more than we want to punish her, trust in our patience. It’s not necessarily misplaced. Pop culture is filled with broken, bitter, cruel anti-heroes, and we often love them for their awfulness. But we prefer them to be men. It’s why some Breaking Bad fans saw Walter White as a “badass” when he was selling meth and poisoning children, but hated Skyler White for “nagging” him—or why we can forgive Jaime Lannister for pushing a child out of a window and raping his own sister, but still need that sister, Cersei Lannister, to be ritually humiliated and preferably killed for her own sins.

Fleabag is willing to let a woman take the anti-hero seat, and to trust that we’ll provide her with the instant, unquestioning forgiveness we’ve supplied so many male leads. We’re encouraged to see much of her awfulness as an expression of her grief and ensuing depression—her pattern of drawing sexual partners in and then demolishing them as soon as they express real affection, for example. But in its most daring moments, the show suggests that Fleabag has always been this way, that she was exactly this destructive even before her friend died, and that grief is just one more ingredient thrown into what was already a fairly toxic stew. Though that’s a harsh judgment on the character, it’s a thrilling way to blow off our cultural tendency to see women as either angelically perfect or hatefully subhuman. Fleabag may never be a nice or happy woman, and she may never have been nice or happy a day in her life. But that doesn’t make her pain less real, or less important—not to her, and not to the audience.

“Either everyone feels like this, at least a little bit, and they’re just not talking about it,” Fleabag says at one point, “or I am completely fucking alone. Which isn’t fucking funny.”

You get the sense Fleabag is betting on the first option: that we can deal with the character’s suffering, and her flaws, simply because they look like our own. That we’ll watch the show simply because she isn’t alone, or because we fear we might be. As with all anti-heroes, she exists to act out what we can’t. Again, that’s a lot of trust to place in your audience. But then, audiences are made up of people—sometimes, of women—and those people always have their own pain.