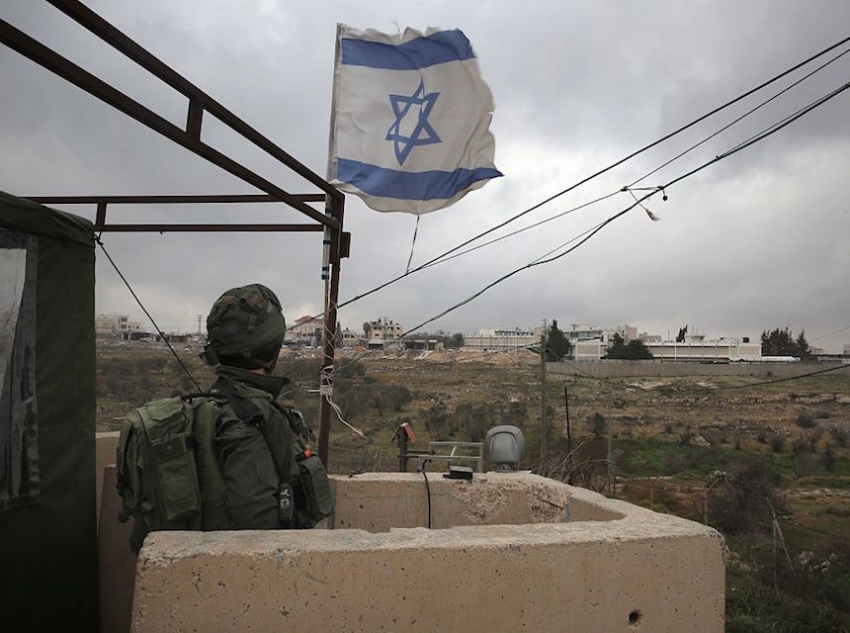 An Israeli soldier stands guard in the Israeli settlement of Bet El, facing the West Bank city of Ramallah, which can be seen in the background. (MENAHEM KAHANA/AFP/Getty Images)

A U.S. network of pro-settlement non-profits aids in the displacement of Palestinians.

Advocates fear that the appointment sends a signal to the Israeli settler movement that encroachment upon Palestinian land will get little meaningful pushback from the United States.

Left-leaning Jewish groups J Street and Jewish Voice for Peace have blasted Friedman for raising millions of dollars for an Israeli settlement in the West Bank. The U.S. Campaign for Palestinian Rights says Friedman is “unfit” because he has spoken approvingly of Israeli annexation of the West Bank.

Friedman, whose Senate confirmation hearing is set for Thursday, is the president of American Friends of Bet El Yeshiva, a pro-settlement nonprofit based in Forest Hills, N.Y. Trump and his son-in-law Jared Kushner’s family foundation are among the nonprofit’s donors. It has poured millions of dollars into infrastructure, including a news outlet and religious schools, for Bet El, a hardline hilltop settlement north of the Palestinian city of Ramallah.

Settlements are one of the major flashpoints in the Israeli-Palestinian conflict because they are built on Palestinian land and displace Palestinian residents. Friedman’s pro-settlement stance puts him at odds with international law, under which the settlements are considered illegal, and with past U.S. administrations, which have consistently opposed settlement construction as harmful to the Israel-Palestinian peace process.

Donald Trump’s election has emboldened the settler movement, which sees Trump and his advisers as sympathetic to its cause. On January 24, the Israeli government announced approval for 2,500 new settler housing units in the occupied West Bank.

President Trump has sent mixed signals on his position on settlements, but recently told an Israeli paper he doesn’t think they are good for peace.

However, his chosen ambassador may be directly aiding the planned expansion. Twenty of the 2,500 new units are slated for Bet El—and appear to be underwritten in part by a donation from American Friends of Bet El Yeshiva. In 2015, Friedman’s organization gave about $666,000 to the Israeli group Sukkat Ovadia Yeshiva of Bet El. That group put cash behind plans for the five-story building with 20 apartments, according to Hagit Ofran, the director of the Israeli group Peace Now’s Settlement Watch project.

These apartment units are particularly controversial because they are illegally built on private Palestinian land—as opposed to land that the Israeli military confiscated for the purposes of building settlements. (The illegality of building on private Palestinian land, however, is beginning to change. Earlier this month, the Israeli Parliament passed a law that would, over the next six months, retroactively legalize many settlements on private land.)

Trump is apparently still working out his policy on Israeli settlements. But advocates fear that the appointment of Friedman sends a signal to the Israeli settler movement that encroachment upon Palestinian land will get little meaningful pushback from the United States.

American Friends of Bet El Yeshiva is one of dozens of similar U.S. pro-settlement nonprofits whose donors receive tax write-offs from the U.S. government, despite the government's historic opposition to settlement construction.

Some of these nonprofits go beyond funding settlement infrastructure to funding security operations. An investigation in the March issue of In These Times looks into one such charity, called the One Israel Fund.

Based in the suburb of Cedarhurst, New York, the One Israel Fund has, since 2001, raised at least $26 million for a variety of West Bank settlements. The money does not just go towards construction of homes and other institutions in the occupied West Bank. In These Times found that at least $960,000 went to security personnel.

These security guards are not a typical police force. Trained by the Israeli military, but paid by the settlements, these live-in civilian security guards form what is essentially a state-sanctioned, militarized neighborhood watch program. The boundaries of that neighborhood, however, can be blurry: Guards often venture out into surrounding Palestinian villages. In These Times found that these guards harass, intimidate and threaten to kill Palestinians—and face virtually no accountability for their actions.

David Friedman’s appointment as U.S. ambassador to Israel has put settlement non-profits in an uncomfortable spotlight. This raises an opportunity to consider their grounds for tax-exempt status, as well as the broader U.S. role in furthering Palestinian dispossession and displacement.