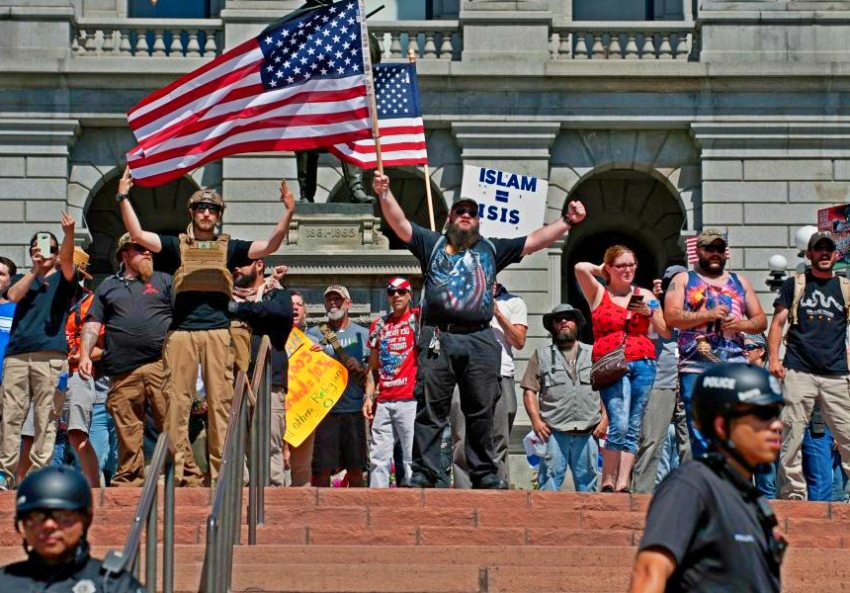 Don’t Blame the Left for Political Violence in America: The Problem Lies with the Right

Railing against the ruling class, Democratic establishment and corporate media—as Bernie Sanders has done—may be outside the mainstream political vocabulary in the United States, but it does not in any way amount to a call for violence.

The narrative is all too predictable. Following the horrific act of political violence in Virginia, which left House Majority Whip Steve Scalise (R-La.) in critical condition and three others wounded, information on the shooter James T. Hodgkinson began to circulate, tenuously linking him to the Bernie Sanders campaign. Without missing a beat, media commentators started filing their takes, framing this attack as a direct outgrowth of Sanders’ left-wing politics and anti-establishment rhetoric.

Long before the shooting on Wednesday, some of Mr. Sanders’ supporters had earned a belligerent reputation for their criticism of Hillary Clinton, the Democratic Party and others who they believed disagreed with their ideas. Sanders fans, sometimes referred to derogatorily as ‘Bernie Bros’ or ‘Bernie Bots,’ at times harassed reporters covering Mr. Sanders and flooded social media with angry posts directed at the ‘corporate media,’ a term often used by the senator.

The suspect in the shooting in Virginia put a new spotlight on the rage buried in some corners of the progressive left.

At CNN, Peter Bergen and David Sterman warn of “the very strong possibility the shooting was an act of leftist terrorism.” They go on to offer a rundown of the left bogeymen commonly propped up by U.S. media—the Black Panthers, Weather Underground and 1970’s “eco terrorists”—linking the acts carried out by these groups to the shooting in Virginia.

And the Kansas City Star’s Judy L. Thomas claims the shooting “highlights a trend that terrorism experts have been monitoring in recent months: the ramping up of violence committed by the left.” The piece goes on to uncritically quote former neo-Nazi organizers and other far-right commentators who place blame for the attack directly on Sanders and the Left.

Reading all this, you’d be forgiven for concluding that a scourge of left-wing inspired violence is plaguing the United States—with the Virginia shooting just the latest example. This is simply not true.

The Kansas City Star piece, while warning of a “disturbing increase in left-wing violence,” cites no other examples besides the shooting in Virginia. For a “left-wing terrorism expert,” the author turns to a representative of the Anti-Defamation League, an organization with a history of endorsing surveillance of Muslims and crackdowns on Palestinian justice organizers.

And at this point, there isn’t a bit of evidence connecting Hodgkinson to any larger scale plot to carry out attacks. Rather, all signs point to Hodgkinson having acted entirely alone. Reports from those who knew him describe Hodgkinson as a solitary and angry individual, largely disconnected from his community.

Yet, media outlets continue to place some level of responsibility for the atrocious attack on the movement sparked by Bernie Sanders’ presidential run, or the broadly-defined “Left”. This narrative implies that the Left has the same problem with political violence as the Right. But this is a false equivalency.

In the days immediately following President Trump’s election, hate crimes in the United States soared, reaching nearly 900 nationwide. Since then, the self-described “alt-right” movement and its cohort of fascists, racists and white supremacists of all stripes have only been emboldened by having Trump and white nationalist Steve Bannon in the White House.

The level of violent hate crimes committed in recent months is staggering.

In late May, white supremacist Jeremy Joseph Christian killed two men and injured another with a knife after an altercation in which he yelled Islamaphobic epithets at two teenage women, one wearing a headscarf, on a commuter train. Christian had a history of spouting white supremacist views online. This attack came just a day before after another racially motivated stabbing of a black man by Anthony Robert Hammond in Clearlake, California.

On May 20, another white man killed 23-year-old Richard W. Collins III on the University of Maryland’s College Park campus. The killer belonged to white supremacist groups on social media. In March, Deep Rai, a Sikh man, was shot outside of his Washington house by an attacker who screamed at him to “go back to your country.” This came just days after another incident in Kansas in which an attacker entered a bar and began shooting, telling his victims, including two Indian men, to “get out of my country.” One of those shot, Srinivas Kuchibhotla, later died.

These are but a handful of examples of the horrendous acts committed by the violent, vigilante right wing in this country. These attacks are becoming all-too-common, and yet they rarely rise to meet the level of media attention now being centered on the shooting in Virginia.

But the scourge of violent, right-wing extremism in the United States goes back much further.  Since its founding, this country has been built on the backs of enslaved and Native people, in a system codified by racism and economic inequality. Xenophobia, fear of the “other” and the protection of a white identity are dark traditions that people of all backgrounds face every day. This history of hate, violence and plunder will have to be recognized and dealt with before we can move beyond such sickening offenses.

These recent attacks from the right have come on the heels of the election of a president who, during the campaign, repeatedly incited violence and offered to pay the legal fees of his supporters who would carry it out. The Southern Poverty Law Center, which has tracked the sharp rise in hate crimes, refers to this recent phenomenon as “The Trump Effect.”

Railing against the ruling class, Democratic establishment and corporate media—as Bernie Sanders has done—may be outside the mainstream political vocabulary in the United States, but it does not in any way amount to a call for violence.

In fact, falsely painting such principled stands as “violence” has a long and shameful history in the United States, used by the government to bring down Left movements, from the McCarthy-era Red Scare to COINTELPRO’s hunting of the Black Panthers and socialists to the more recent infiltration and surveillance of the Occupy Wall Street and Black Lives Matter movements.

The type of racist political violence we’re seeing is not inevitable. But to stop it, we’ll need to reclaim anti-establishment politics from the Right and offer a real alternative: a Left movement capable of taking on both systemic racism and economic inequality by representing the interests of working people everywhere. False narratives not only underestimate the threats we face, but undermine this necessary political alternative from the left.