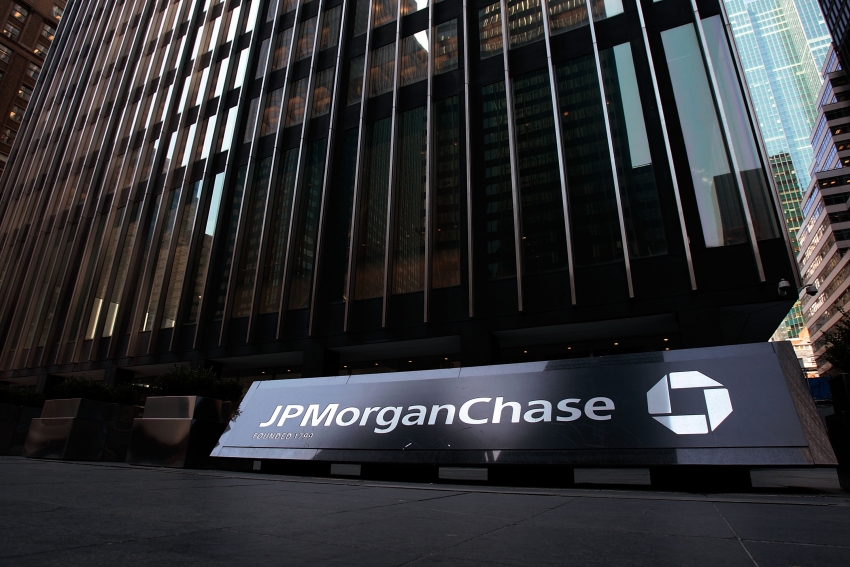 Chase Says It’s Fighting Climate Change. So Why Is It Financing the Fossil Fuel Industry?

JPMorgan Chase (“Chase”) talks a big game on climate change. The Wall Street bank has committed to becoming entirely reliant on renewable energy by 2020, and facilitating $200 billion in clean financing—of low-carbon fuel sources—by 2025. “Business must play a leadership role in creating solutions that protect the environment and grow the economy,” CEO Jamie Dimon said in a statement announcing the pledge last summer.

“Chase tripled their funding of tar sands over the last few years, and have dramatically ramped up their investment in fossil fuels,” says Tara Houska, a member of the Couchiching First Nation, an attorney and national campaigns director for Honor the Earth. Chase has also helped Enbridge finance its proposed Line 3 pipeline, which would carry tar sands oil through Ojibwe land in the upper Midwest. “The heart of my people’s culture would be obliterated if and when Enbridge’s Line 3 tar sands pipeline breaks in Minnesota’s vast watersheds and rich wild rice beds,” added Houska, who was in Texas for the shareholders’ meeting this week. “Chase can play a major role in preventing this from happening by ending its credit relationships with Enbridge and all destructive fossil fuel actors.”

According to Houska, demonstrators whose organizations had purchased shares were largely pushed into an overflow room at the annual shareholder meeting in Plano, giving those who showed up little space to make their case heard. One measure proposed in the main room would have increased transparency around investments in genocide. It was voted down.

The gulf between Chase’s public commitment to social responsibility and its actual business model isn’t unique. In recent years, many banks have talked up their investments in green bonds—money set aside for environmentally-minded projects—and commitment to environmental, social and governance (ESG) factors in making investment decisions, as opposed to simply short-term profits. The elites who gathered in Davos for the World Economic Forum in January ranked climate change among the world’s most pressing issues. Just last month, Chase and investment giant Blackrock teamed up to offer a new suite of global fixed income indices that incorporate ESG concerns.

Yet despite their stated focus on green bonds and ESG, major banks last year actually upped their financing of coal, oil and natural gas infrastructure projects by 11 percent to $115 billion. Financing of tar sands projects alone swelled by 111 percent through 2017. Chase is helping drive this trend: According to a study released this spring by the Rainforest Action Network, it's now the third-largest financier of fossil fuel projects, and the largest among private bank funder of fossil fuel projects overall. In the last three years, the bank has poured $26.1 billion into oil, coal and gas projects, trailing behind the China Construction Bank and Royal Bank of Canada. Despite passing a policy in 2016 to stop financing new coal mines or coal-fired power plants in high-income OECD countries, the bank’s financing of coal projects was 21-times greater than it was in previous years. Chase’s three-year contribution to fossil fuels is nearly as much as the total valuation of green bonds issued by the world’s 200 largest banks in 2017—just $27 billion, representing just 1 percent of those banks’ nominal amount of total bond issuance over the same year. As an S&P Global study finds, only one fifth of those 200 banks have ever issued a green bond.

The demonstration at the shareholders' meeting came just a week after a wave of protests around the country, calling attention to Chase’s role in financing Kinder Morgan’s Trans Mountain pipeline, recently stymied by British Columbia’s provincial government after years of pressure from First Nations and environmental groups. One action in Seattle that shut down a Chase bank branch and saw 14 people arrested.

Divestment work has been happening globally, as well. As part of the Indigenous Women’s Divestment Delegation, Houska has met with bank executives in the United States and Europe in addition to planning protests like the one this week. “They'll talk about one-off projects that they're helping to support, little tokens of community investment,” she said of those meetings. “That does not in anyway counteract or overcome the harm done by their financing fossil fuel projects.”

Working closely with the Sámi people—indigenous northern Europeans—the delegation has pressured Norway’s trillion-dollar sovereign wealth fund to drop fossil fuels from its holdings, a measure that’s been proposed by the fund’s leadership and will be formally decided on in the fall. A number of cities are looking to sever their ties to banks that fund fossil fuel projects, and New York City recently announced it would divest $5 billion from fossil fuels and sue oil companies over their contributions to climate change.

There have been ongoing efforts over the last several years for universities and pension funds to drop their investments in fossil fuels. Activists fighting mountaintop removal coal mining successfully targeted banks like PNC to stop financing the practice, and the fight against the Keystone XL pipeline spawned its own push against Bank of America. This most recent wave of energy in the fossil fuel divestment movement—targeting banks’ financing of fossil fuel infrastructure, in particular—was spurred by the momentum generated in the fight against the Dakota Access Pipeline (DAPL).

Matt Remle, who lives in Seattle, is a member of the Standing Rock Sioux tribe, and one of the lead organizers behind the protest against Chase earlier this month. Like Houska, he was deeply involved in the encampment there to halt the Energy Transfer Partners project. Both see that on-the-ground work as deeply tied to divestment efforts. “They’re all connected in the sense that folks have realized you have to have a lot of tools in the toolkit to take on multinational corporations,” he says. “You can’t rely solely on one tactic, be it divestment or direct action. You have to apply pressure wherever you can.”

In Seattle, he and several organizers first took aim at Wells Fargo over its support for DAPL, holding protests in bank lobbies and encouraging individuals, institutions and—eventually—the city itself to close their account with the bank.

The idea caught on. “We started getting a lot of phone calls from people around the country and around the world asking how we can implement similar divestment campaigns,” Remle tells In These Times. After that, he helped found the group Mazaska Talks, which offers sample resolutions and ordinances to those looking to start their own municipal divestment campaigns, along with resources on how to run divestment campaigns, where to re-invest funds and figure out which banks are funding which companies. Given banks’ ubiquity in towns and cities around the country, divestment efforts also provided a way for people who couldn’t join on-site direct actions or protests against fossil fuel infrastructure projects a way to help stop them.

With the support of progressive city council members, Seattle City Council voted to removed its $3 million operating account from Wells Fargo, and passed a resolution to prohibit any bank who funds tar sands pipelines from bidding on city contracts. It was recently announced, though, that the Council would reopen the account after failing to find another bank that would take on the account.

That’s a large part of why in Seattle and several other cities, divestment efforts are also tied to pushes to create a public bank. The Bank of North Dakota is currently the country’s only state-run bank, though Sen. Kristen Gellibrand (D. NY) recently introduced legislation to create a national public option for banking through the U.S. Postal Service. Remle says he and others looking to bring public banking to Seattle are looking more closely at a long-running effort to do the same in Santa Fe. Remle says they’ve also taken some inspiration from tribally-owned financial institutions, which are numerous in the Southeast, as alternatives to Wall Street banks, their toxic investments and their lon history of discriminatory lending practices.

“We know that as a city or as a tribe, when we are banking with a Wells Fargo or Chase or Bank of America, that money isn’t being reinvested back into our communities. We are very clear when we are pushing our banking ordinance that it’s not a victory to jump from one Wall Street bank to another,” he says. “Our ultimate goal for Seattle is to take our money completely out of there and have control over our own finances.” According to Remle, communities must create financial pathways to build out affordable housing and make low-interest loans available to people of color-owned small businesses.

The city is now in the early stages of a feasibility study for public banking, overseen by a representatives from labor, environmental groups, indigenous tribes and small businesses. At the behest of campaigners there, Los Angeles, San Francisco, Oakland and Portland are now involved in similar processes.

“To be blunt,” Remle says of big banks’ embrace of green financing, “they’re full of it.”