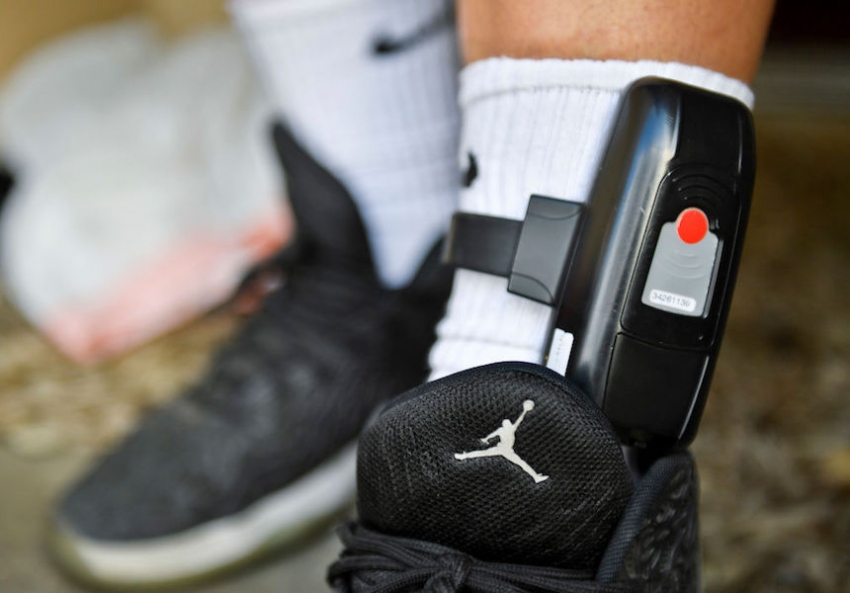 Trump is ramping up the use of electronic ankle bracelets on immigrants. (The Washington Post/Getty Images)

ICE’s use of electronic monitoring devices poses risks to immigrants released from detention.

One report told of a Mexican mother of two who experienced electrical shocks and developed painful sores at the site of the shackle. She was told that the shackle was the cause of her symptoms.

Immigration and Customs Enforcement (ICE) officials announced July 10 that the department will return to Obama-era “catch and release” policies, in which detained migrant families deemed “low risk” are released under electronic monitoring via GPS-enabled ankle shackles. This marks a break from the Trump administration’s recent “zero tolerance” policy of detaining and criminally prosecuting all undocumented immigrants intercepted at the border. While Trump initially condemned catch and release as insufficiently punitive and ended the policy in April, his administration was faced with few options after a California judge struck down Trump’s plans for indefinite family detention July 9.

Electronic monitoring has been lauded by mainstream news outlets, including the New York Times, as a humane alternative to detention. But since its 2004 inception, electronic monitoring has merely expanded the reach of ICE, physically injuring immigrants and subjecting them to a degrading level of surveillance, while doing little to curb detention rates. Immigration advocates have been fighting the practice for more than a decade, and continue to push for true, non-punitive alternatives to detention.

Before the widespread introduction of electronic monitoring devices (EMDs), Immigration and Naturalization Services (INS) had contracted with the Vera Institute of Justice to develop and run a system of community-based alternatives to detention. Under this system, people in immigration proceedings were given individual case workers who would connect them with legal, medical and housing services.

Yet despite its cost-efficiency and high success rates, after INS enforcement duties transferred to ICE in 2003, the Vera Institute program and other similar pilots were soon scrapped in favor of alternatives like the Intensive Supervision Appearance Program (ISAP), which relied on more restrictive measures such as electronic monitoring devices. (Electronic monitoring has also become widely used elsewhere in the criminal justice system.) These electronic monitoring services are contracted through BI Inc., a subsidiary of GEO Group, a private prison corporation that also operates a number of ICE detention centers. Once these punitive measures were available, ICE began imposing EMDs on people who had never even been detained, or who would otherwise have been released on bond without restrictions. Only one holistic alternative has been explored by ICE since the introduction of ISAP: the Family Case Management Program (FCMP). The FCMP, which was similar to the Vera Institute program, was founded in 2016 and operated with high success rates but limited reach until it was cancelled under Trump last June.

Despite ICE’s claims that EMDs “provide expanded options for release”, their use has not resulted in any decrease in detention rates. Rather, rates of both have skyrocketed over the past decade as ICE continues to expand enforcement efforts. During the first six months of 2015, the number of EMDs in use by ICE nearly doubled to 9,300. According to a report released this March by the Center for Media Justice, that figure has reached 30,000. Greg Chen, the director of government relations at the American Immigration Lawyers Association (AILA), tells In These Times: “What they have done is create yet another method of infringing upon people’s liberties when it’s not necessary.”

But while EMDs may be an improvement, they are far from humane. In April 2016, a group of 16 immigrant legal and advocacy groups in the Bay Area filed a complaint to the Department of Homeland Security alleging widespread violations of ISAP participants’ rights. The complaint compiles the cases of several individuals who experienced physical pain and debilitating symptoms caused by the monitoring device, including severe electrical shocks, burns, numbness and inflammation. One report told of a Mexican mother of two who experienced electrical shocks and developed painful sores at the site of the shackle which spread across her body, causing irritation and temporary loss of eyesight. She was told upon a visit to the hospital that the shackle was the cause of her symptoms. Nevertheless, she was forced to wear the shackle for 11 months. ICE claimed that all of these symptoms were normal.

ISAP participants are often placed under 12-hour curfews, required to check in with agents up to three times a week, and subject to regular unscheduled visits. At their regular check-ins participants were forced to wait up to eight hours to be seen, were forbidden from using the bathroom, and were forbidden from bringing their children despite the fact that many did not have access to child care or stable employment due to the program’s stringent requirements. Agents were regularly abusive toward program participants, frequently yelling during appointments and over the phone and refusing to meet with participants’ lawyers or allow them to attend appointments. One participant reported that an agent became enraged and started throwing objects when she could not provide a friend’s contact information; another was threatened with deportation because she brought her child to her ISAP check-in.

For those subject to electronic monitoring, violence suffered at the hands of ICE does not end at the detention center’s walls. María Asunción, a Honduran immigrant who organizes against ICE’s use of EMDs in the Bronx, commented on the devices’ degrading effects to NACLA in 2015 “Just as before they placed the slaves in iron chains, now in the capitalist economy our chains are electronic.”

Zachary Kligler is a summer 2018 In These Times editorial intern.