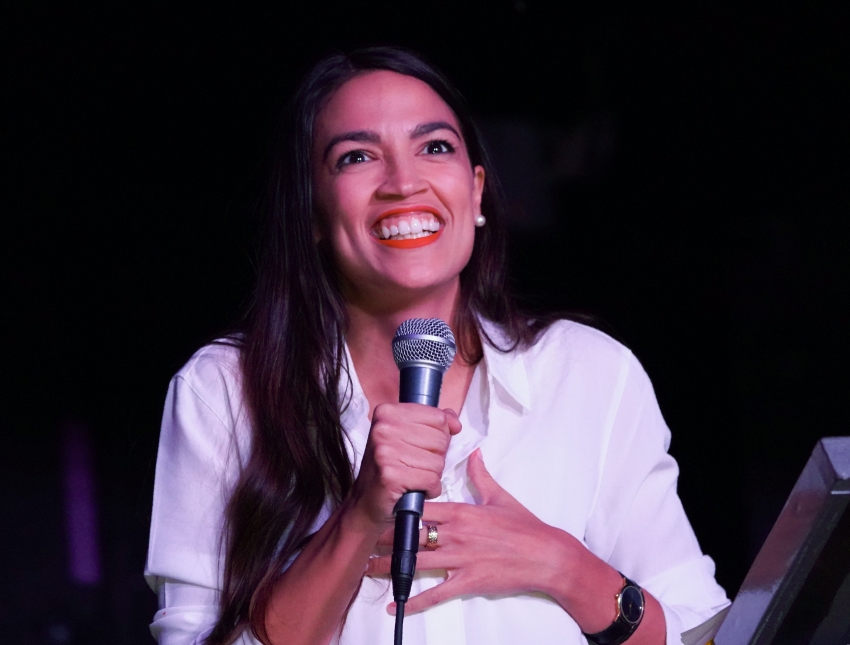 Democrats Won the House. To Keep Winning, They Need to Move Sharply Left.

Democratic operatives will use the midterm results to preach centrism, but the future of the party lies in its left flank.

With Alexandria Ocasio-Cortez and Rashida Tlaib set to enter the House of Representatives, alongside Bernie Sanders in the Senate there will now be three open socialists in Congress—the most in U.S. history.

In the days following Nov. 8, 2016, the Democratic Party looked to be on life support. Party insiders had promised a repudiation of Trump’s far-right platform, and instead saw staggering Democratic losses at every level of government.

Flash forward two years and the party’s political fortunes are reversed. On Tuesday, voters across the country showed they’re fed up with their hate-monger-in chief and handed Democrats control of the House of Representatives for the first time in eight years. Much like the 2010 election and the arrival of the Tea Party on the national stage, the Democrats have benefitted from a wave of voters looking for a change in leadership and direction.

So what should the Democrats do?  Though moderates advise a rush to the center, the party’s future success demands embracing its left flank. It’s there that the energy lies.

The centrist wing of the party is ready to pounce, urging Democrats to adopt tepid policies that won’t pose a real challenge to current lopsided power arrangements.

House minority leader Nancy Pelosi has vowed to unilaterally resurrect the “pay-go” rule that would require all new spending to be met with equal tax increases or budget cuts.

Such a restriction would tie the hands of Democrats who want to enact major public policies. “Budget neutrality” was a constraint Republicans never considered when pushing through their agenda of showering money upon the rich. And the entire basis of the rule lies in a fiscally conservative approach to governing, something Democratic voters in 2018 have not demanded.

What people want are progressive policies that would materially improve their lives, such as universal, single-payer healthcare and a living wage—both of which are enjoying record support.

Senate minority leader Chuck Schumer, for his part, has promised Republicans that he will not change filibuster rules if Democrats take back the Senate under his watch. While this may sound like a good-faith appeal to retaining Senate norms, it is in fact another capitulation to an undemocratic system that would hamstring a future Democratic administration from pushing through a truly progressive agenda.

Republicans have proven time and again they have no intention to work constructively with the Democrats, and as Obama’s presidency proved, they will use any parliamentary maneuver at their grasp to block progressive priorities.

After all, Sen. Mitch McConnell knew he needed to eliminate the filibuster on the issue of Supreme Court nominees in order to push through the GOP’s conservative judicial program, and he did so to little fanfare. Now Neil Gorsuch and Brett Kavanaugh are both sitting on the bench and will decide decades of future jurisprudence. If Schumer were serious about countering the Republicans’ ruthless right-wing policies with gutsy progressive countermeasures, he would retain the option of eliminating the filibuster.

Then there’s Jonathan Cowan, president of the centrist, corporate-funded think tank Third Way, who recently told TIME, “The party is not going to go in the direction of Sanders-style socialism, because it’s not winning on the issues and it doesn’t win politically except in a very, very limited number of places.”

Cowan has already been proven wrong on both counts. Tuesday was the definition of socialists “winning politically.” A new crop of solidly left-wing candidates was elected, including a record-setting number of openly identified democratic socialists.

With Alexandria Ocasio-Cortez and Rashida Tlaib set to enter the House of Representatives, alongside Bernie Sanders in the Senate there will now be three open socialists in Congress—the most in U.S. history. This is in addition to the dozens of socialists who won office on the state and local levels, including in places like Pennsylvania, Texas and Washington, D.C.

These victories represent a break from the Third Way political consensus that has reigned supreme in the Democratic Party for three decades. The center of gravity in the party is moving away from means-tested corporate liberalism and toward big, universal programs that challenge the political and economic status quo. For democratic socialists like Ocasio-Cortez and Tlaib, that means directly targeting capitalism as the source of the economic and social miseries facing working people in America.

In other words, socialists are winning on the issues, too.

This turning of the tide began with the 2017 nationwide Women’s March, one of the largest protests in U.S. history. That demonstration was radical in not only its scope but also its demands, which included an end to mass incarceration and police brutality, the institution of comprehensive healthcare and antidiscrimination protections, full access to abortion, paid family leave and the right to unionize without interference by employers.

The march, which elected Democrats across the country flocked to be a part of, helped seed thousands of other demonstrations across the around issues ranging from stopping Trump’s Muslim ban to protecting the climate, ending corporate tax loopholes to achieving racial justice.

These mobilizations stirred something greater than defiance: Throngs of Americans also joined organizations like Indivisible, Brand New Congress, Justice Democrats, Our Revolution and the Democratic Socialists of America, advancing a bold progressive alternative to the status quo.

These alternatives have translated into Democratic political discourse. For decades, Bernie Sanders was a lone champion of a broad redistributive agenda that would extend political and economic power to Americans across the socio-economic spectrum.

Now he has been joined by a host of prospective 2020 presidential candidates, including Kristen Gillibrand, Elizabeth Warren, Cory Booker and Kamala Harris. All of these influential figures have put forward a political vision far to the left of what the Democratic Party ran on in 2016—one that includes Medicare for All, a $15 minimum wage and a federal jobs guarantee.

Alongside the push by social movements and progressive legislators for a more egalitarian politics, Democratic voters are moving decidedly left on issues ranging from immigration to race to economics. Republican policies like massive tax cuts for the rich, repealing Obamacare and cutting Social Security, meanwhile, are fantastically unpopular.

A third of Senate Democrats (the most ever) now support Sanders’ Medicare for All bill, including other likely 2020 contenders. When it comes to the American public, a stunning 70 percent support the idea, including over 50 percent of Republicans. And over half of Democrats who ran in contested House races this year backed Medicare for All—a first in the party’s history.

It’s not just universal healthcare. Tuition-free college, another cornerstone of Sanders’ 2016 campaign, now has majority support. The same goes for a $15 minimum wage. And when it comes to taxing the rich to fund social programs, three-quarters of Americans are on board. Over 70 percent of Americans now want to reduce mass incarceration and over 90 percent want to enact criminal justice reform, with a majority recognizing racial bias in the system.

A federal jobs guarantee, a policy that would disproportionately benefit marginalized communities including women and people of color, is now supported by a majority of Americans.

When it comes to the dire threat posed by climate change, the public is catching on: A poll this year found 52 percent of Americans, including 69 percent of Democrats, now believe the federal government “has a great deal of responsibility” to act urgently to mitigate climate change.

These policies didn’t emerge from the mouths of Sanders and other progressive lawmakers—they were born of movements that demanded them. Whether it was nurses fighting to make sure their patients had the care they deserved, fast food workers fighting for a living wage, indigenous communities protecting their land or low-income Americans pressuring the wealthy to pay up, their demands are now mainstream.

And these demands should form the basis for what policies Democrats push now that they hold the majority in the House.

The party has come a long way from the dark days of November 2016. But growing Democratic strength and wresting power from the GOP will require more than just resisting Trump or calling for a return to civility; or even to the Bill Clinton era.

It will mean rejecting the biddings of the Jonathan Cowans of the world and standing up to the corporate interests that have bankrolled the party establishment for decades. Americans, rightfully suspicious of corporate dominance, are embracing policies that challenge concentrated economic power.

They see that a class war has long been raging, but it’s been waged on the part of the rich who are gobbling up nearly all of the nation’s wealth. Trump is the latest manifestation of this class war, and, as the election results show, Americans are sick and tired of it.

The Democratic Party should welcome the class politics that are pumping life back into our democracy. Now that Democrats have regained power in Congress, their next step is clear: Pass legislation that will make life better for everyday Americans, and give them more control over the decisions that affect them.

Medicare for All, tax increases on the rich and a jobs guarantee wouldn’t pass the GOP Senate—and certainly wouldn’t be signed by President Trump—but pushing them in the House would show that Democrats stand on the side of working people, not the super rich.

The freshman class of democratic socialists in Congress is set to push just such an agenda—other Democrats should follow their lead or get out of the way.