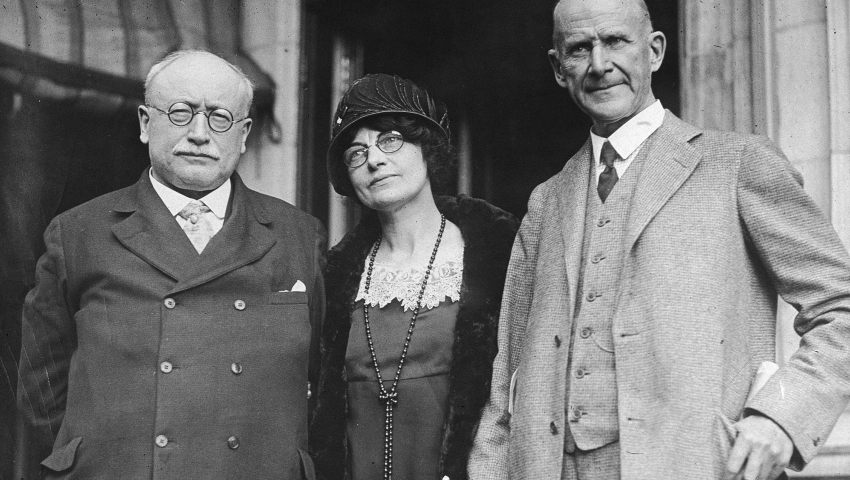 Socialists in the House: A 100-Year History from Victor Berger to Alexandria Ocasio-Cortez

American socialists have a long and proud tradition in elected office. Alexandria Ocasio-Cortez and Rashida Tlaib are the latest to carry the torch.

Socialists in Congress are a rare but not unknown phenomenon in American political history.

On Tuesday, November 6, Rashida Tlaib, born and raised in Detroit, the daughter of Palestinian immigrants, won election in Michigan’s 13th district, making her one of the first Muslim women, as well as the first Palestinian-American woman, elected to the House of Representatives. Alexandria Ocasio-Cortez, whose father was born in the Bronx and whose mother was born in Puerto-Rico, won election in New York’s 14th district and will be the youngest woman ever to serve in the House.

There’s something else that sets them apart from their new colleagues in Washington, DC: Both are members of the Democratic Socialists of America (DSA).  As a result, he 116th Congress will consist of two socialists and four hundred and thirty-three representatives of other persuasions. It’s a start.

Socialists in Congress are a rare but not unknown phenomenon in American political history (although never until now Congresswomen). Two served in the years leading up to the First World War, an era which saw over a thousand members of the Socialist Party elected to local and state offices. In 1910, two years before socialist presidential candidate Eugene Debs attracted over a million votes (6 percent of the total cast) in the presidential race, Victor Berger, an immigrant from Austria-Hungary and founding member of the Socialist Party, was elected to Congress from Milwaukee, Wisconsin.

Defeated for re-election in 1912, six years later the “sewer socialist” was again voted in, even after being indicted for violation of the Espionage Act, a federal law targeting anti-war dissenters. Democratic norms counted for little in the hysteria of wartime and the post-war Red Scare, and the House of Representatives twice refused to seat him, even when he won a special election in 1919 for the same seat. Finally, in 1922, after his Espionage Act conviction was overturned by the U.S. Supreme Court, Berger was once again elected to Congress and allowed to take his seat.  He was re-elected twice more before retiring.

The other socialist Congressman in the Debs era, Meyer London, an immigrant from Lithuania and another founding member of the Socialist Party, was elected to Congress from a district on the Lower East Side of Manhattan in 1914, re-elected in 1916, but defeated in 1918. He ran a successful re-election campaign in 1920, serving a final term.

It would be another half century before avowed socialists were again elevated to the halls of Congress. Democratic socialist Ron Dellums represented the Bay Area from 1971 through 1998, and Major Owens represented Brooklyn voters from 1983 through 2007. Both joined DSA after its founding in 1982, and both ran for office on the Democratic ticket (much like Ocasio-Cortez and Tlaib).

Bernie Sanders was elected to represent Vermont as an Independent in the House in 1990, where he served for 16 years. In 2006, he was elected to the U.S. Senate where he continues to serve today. Sanders is likely the most high-profile openly socialist elected official in the United States, and greatly helped raise the profile of democratic socialism through his Democratic presidential run in 2015 and 2016. Sanders is not a member of DSA, though he has spoken at events for the organization during his political career.

Voters who cast their ballots for Berger and London in the early 20th century knew exactly who and what they were voting for—the Socialist Party, the causes it embraced, and the ultimate goal of creating a socialist society. For Dellums and Owens, both of whom had held political office long before joining DSA, their democratic socialist allegiance was more of an incidental aspect of their appeal to the average voter. Each publicly acknowledged their membership in DSA, and the organization proudly advertised their membership. But neither Dellums nor Owens were dependent on DSA politically. They certainly didn’t feel obliged to consult with the organization to decide how to vote, although both proved reliably progressive.

A half-century earlier, Berger and London had much stronger organizational ties to the socialist movement. But even then, they charted their own course, based on political conviction—or political expediency. Berger spoke out against WWI and wound up facing heavy jail time as a result, as well as the denial of his rightful seat in Congress. London opposed American entry into the war, but once war was declared he reluctantly decided to support it. There was grumbling from the socialist ranks about his apostasy, but no official condemnation or sanctions. (While Berger was further left than London on the question of opposing the war, he was to London’s right on other issues, such as the restriction of immigration. Socialist Party politics in the Debs era were complicated. For a good guide on these matters, see In These Times founder James Weinstein’s classic study, The Decline of Socialism in America, 1912-1925.)

What then can we expect of the likely post-election relationship between the two new socialist Congresswomen and DSA? Tlaib already had made her mark in Michigan state politics before joining DSA. Ocasio-Cortez, on the other hand, made her first run for political office within a year of joining DSA; volunteers and staff from New York City DSA were vital to her success. Nonetheless, as in the earlier case of Dellums and Owens, the democratic socialist label was likely of little importance to most of those who voted for either candidate in the general election, since they both ran as Democrats in heavily Democratic districts.

And now that they are in Congress, both Tlaib and Ocasio-Cortez will almost certainly develop broadened political bases largely independent of DSA. Organized labor and liberal advocacy groups will be in their camp now. The Congresswomen may, out of conviction or good will, continue to pay DSA dues, and show up for rallies, fundraisers or other socialist gatherings, as Dellums and Owens did. But it’s unlikely they’ll have the time or inclination to devote much more in terms of direct involvement. If they are going to do their jobs right, serve their constituents—and get re-elected—they are going to be very busy and in a much bigger arena.

Volunteer power from DSA, however, did help both Tlaib and, perhaps more so, Ocasio-Cortez, win their contested primaries. That involvement shows what kind of an impact the organization can have on electoral races, and will likely inspire other insurgent candidates to seek DSA’s endorsement in future races. And as more politicians begin to adopt the label of “democratic socialist”—while advancing the values and policy priorities of the group, DSA will continue to grow in power as a player in American politics.

It is this growth that is more important for the organization’s continued success than discussions of strict accountability to DSA. After all, as elected representatives, Tlaib and Ocasio-Cortez are accountable to a number of different groups that helped elect them, and first and foremost—and rightly so in a democratic system—to the voters of the districts they represent. And as a matter of practicality, DSA currently needs Tlaib and Ocasio-Cortez more than either of them need DSA.

This reality is worth remembering if the newly reenergized DSA is to help expand the socialist caucus in the House of Representatives beyond the two it currently counts.