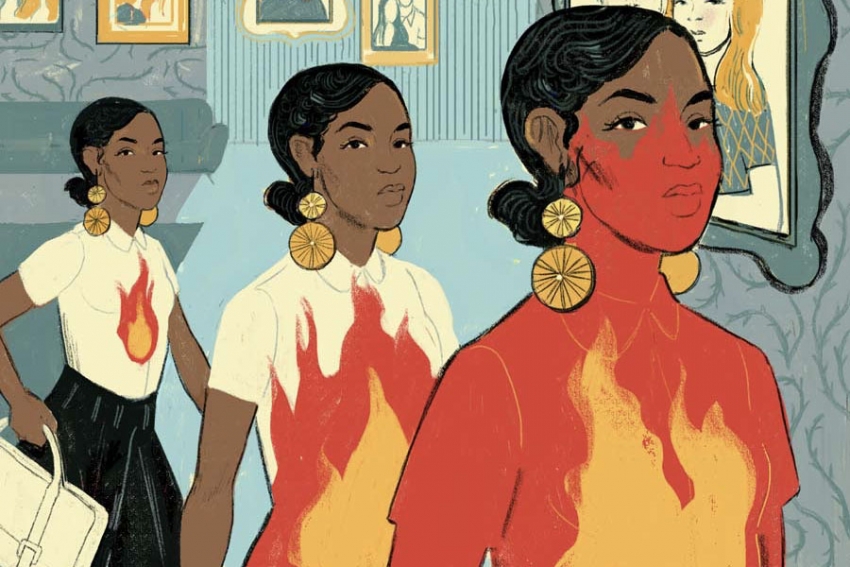 Chronic stress is killing us. We can’t keep repressing our rage.

It is an infuriating reality that Black women are encouraged to repress our anger even when we have so much to be angry about. When I sit weeping from anger in the office of a white male supervisor gaslighting me out of my job, when I show up as a reporter for the San Francisco Chronicle at an International Women’s Day event and am directed to the catering staff entrance (despite wearing a press pass), when my middle-aged white female supervisor passive-aggressively jokes that she fears I will replace her as she nears retirement age and then proceeds to fire me—I seethe silently and am reminded that to be a Black woman in America is to be constantly exposed to hostility inspired by one’s mere presence.

For years, I coped with this reality by smoking cigarettes and drinking a lot. I avoided feeling my feelings because I had no models for what it would look like to advocate for myself without unleashing the rage I had suppressed for so long.

In her 1981 keynote at the National Women’s Studies Association conference, “The Uses of Anger: Women Responding to Racism,” poet and Black feminist author Audre Lorde introduced a pioneering intersectional vision of anger’s usefulness in coping with racism, classism and sexism. “My response to racism is anger,” Lorde said. “That anger has eaten clefts into my living only when it remained unspoken. … Black women are expected to use our anger only in the service of other people’s salvation or learning. But that time is over.”

While Lorde found some relief in expressing her anger, it comes at a cost. I have always felt the invisible pressure of respectability politics—the notion born in the Reconstruction era and championed in the Obama era that for Black people to be successful, to be worthy of the protections of white citizenship, we have to behave ourselves and assimilate to the dominant culture. Or, to use Michelle Obama’s famous mantra: When they go low, we go high.

The constant refrain of respectability politics, explicitly or implicitly, is that marginalized people must rise above racism and sexism and the emotions they inspire—such as anger, depression and anxiety—in order to gain favor from those in power. As such, Black women have al-ways been discouraged from expressing such emotions. In 2018, when tennis champion Serena Williams openly expressed her anger at a notoriously strict umpire, she was fined $17,000 and headlines generally portrayed Williams’ rage as an “outburst” unbecoming of a sports star.

Growing up, I was encouraged by my mother, even as a poor child in the Bronx, not to embarrass her by throwing a temper tantrum like some white children I saw screaming at Sunday Mass, for instance.

We never want to give white people—who already view us as immune to pain, as consistently and forever unequal—a reason to think we are irrationally upset, which is how anger voiced from a Black woman is usually construed. But the catch is that never expressing your emotions makes people believe you don’t have them or your feelings don’t matter. And it allows deeply rooted biases about race and gender to persist.

In the decades since Lorde gave language to a legacy of righteous rage, scholars and scientists have started to pay serious attention to the deleterious effects of the chronic stress caused by enduring racism and sexism, which wears Black women’s bodies down over time. Quite literally, this stress is killing us.

Arline Geronimus, a professor at the University of Michigan, pioneered research on the psychosocial impacts of inequality by identifying a physiological “weathering” process, which “accelerates aging and increases health vulnerability. It is spurred by chronic toxic stress exposures over the life course and the tenacious high-effort coping [that] families and communities engage to survive them, if not prevail.”

This “high-effort coping” manifests in the body in bursts of adrenaline commonly known as a “fight or flight” response, when the nervous system kicks into high gear. In a 2017 paper, re-searchers Bridget Goosby, Elizabeth Straley and Jacob Cheadle found that the daily stressors that uniquely affect Black women trigger this response with deleterious consequences: “Because stress response systems are optimized to deal with immediate threats but can be harmful when continually activated… the need to constantly prepare for and adapt to stress accelerates wear and tear on the body (i.e., allostatic load).”

New studies are linking this higher “allostatic load” to the host of health issues disproportionately suffered by Black women: high blood pressure, heart disease and diabetes-related deaths. Research also suggests that allostatic load is associated with Black women’s internalized and constantly affirmed sense of political and social powerlessness—and of the contrast between that powerlessness and the Strong Black Woman stereotype.

The result of knowing we are expected to be strong while also being among the least considered, lowest-paid people in society is “heightened levels of emotional distress that include frustration, anger and resentment,” write A. Antonio Gonzalez-Prendes and Shirley Thomas in their 2011 paper “Powerlessness and Anger in African American Women: The Intersection of Race and Gender.” For her 2017 dissertation, researcher Naomi M. Drakeford studied 210 Black women and found correlations between belief in the Strong Black Woman stereotype, emotional suppression and depression.

So what is to be done? If not even a celebrity like Serena Williams can voice her anger without being penalized, noncelebrities are certainly at risk. If we take up space with our justifiable fury, the negative consequences are myriad, from employment backlash to reinforcing stereotypes about Angry Black Women. If we suppress our anger, we risk validating a different, damaging caricature that paints Black women as feeling no pain.

There are some glimmers of hope: The Drakeford paper found that spiritual coping mechanisms decrease the negative health effects of adherence to the Strong Black Woman stereotype. There are also some local health interventions. In New York City, health officials have started racial sensitivity and culturally appropriate healthcare training in OB/GYN and maternity wards to stem escalating maternal deaths, for example.

But ultimately, the persistent problem of bias at the intersection of race and sex stems from a broader white supremacist culture that has reinforced notions of Black female inferiority for hundreds of years. Expressions of rage then allow racists and sexists to justify their bad behavior as existing only in the imagination of the survivor of their biases.

Health and longstanding biases aside, there are a number of political reasons Black women shouldn’t keep our anger bottled up. Lorde noted that suppressed anger undoubtedly helped white patriarchal power keep women silenced and angry at one another. “In the male construct of brute force, we were taught that our lives depended upon the good will of patriarchal power,” Lorde said. “And if we accept our powerlessness, then of course, [expressing our anger] can destroy us.” But channeling collective anger—supporting Black women’s civic engagement and increasing representation in Congress, for example—is an important first step in the foundation for building sustainable political power. We saw this in the Black Lives Matter movement, for example, which began with the shared outrage of three Black women over the killings of Black men and boys.

But Black women’s expression of anger and suffering will not dismantle white supremacy on its own; it is only the alarm bell that signals the urgent need for change. Consider, for example, Stacey Abrams’ run for governor in Georgia. She embodies the concept of speaking truth to power, of expressing anger appropriately, but the manifestations of a racist and sexist political system (in the form of widely reported voter suppression) resulted in her being shut out.

Allostatic load gives the medical establishment’s imprimatur to a fact Black women have long known: Life under white patriarchy is wearing us down. To the extent there are political or policy solutions that could help reduce our chronic stress, they must include not only listening to Black women but hearing us.

Joshunda Sanders is an author living in New York where she teaches writing at The New School.